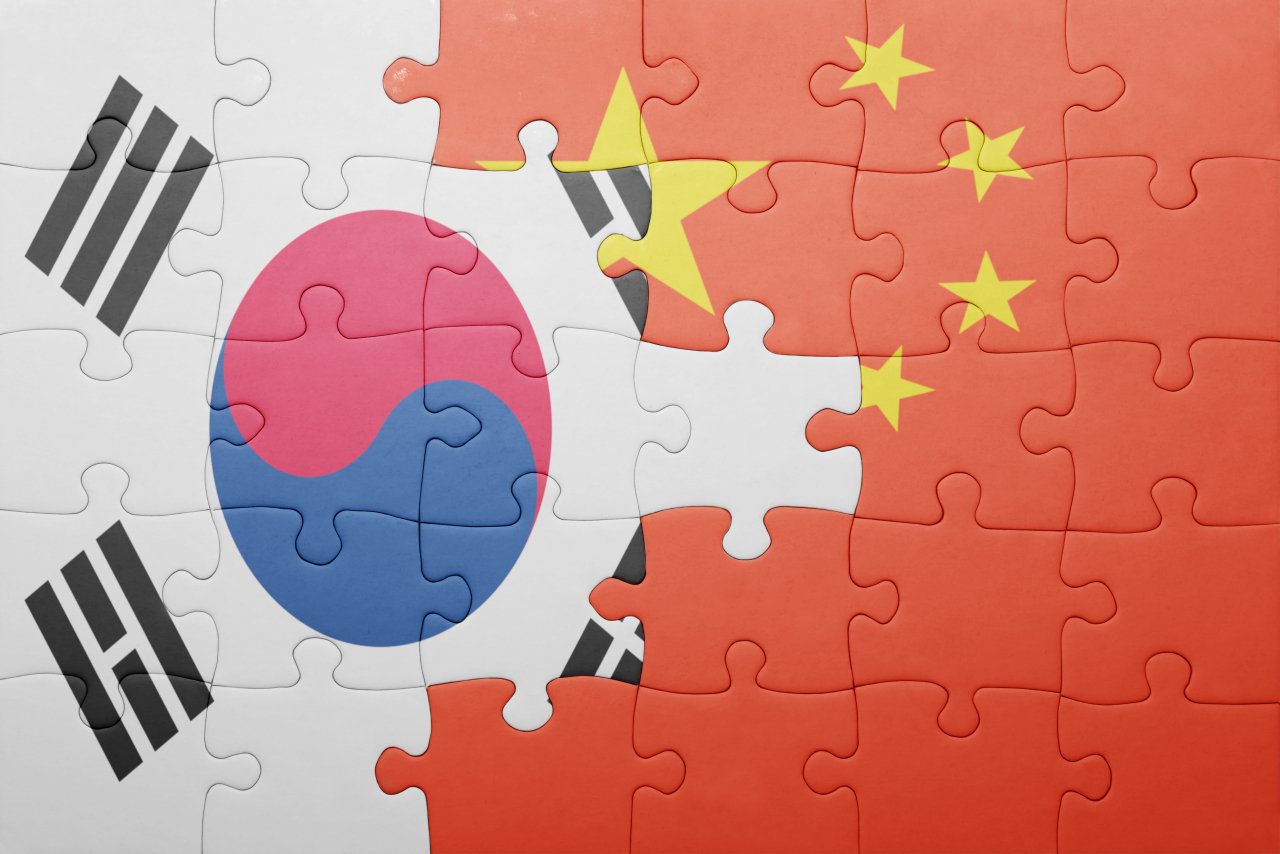 South Korea's flag (left) and China's flag (123rf)
Scaling down of economic ties with Beijing could be unavoidable if China continues to tie the economy to politics, experts say, as the new South Korean administration’s top officials hint at a change in Seoul’s China strategy that includes economic issues.

On Tuesday, Seoul’s senior presidential secretary for economic affairs Choi Sang-mok said that Korea should reduce its reliance on China for exports, possibly hinting at a strategy that veers away from China in terms of the economy.

Speaking in Madrid, where he accompanied President Yoon Suk-yeol to the NATO summit, Choi said that China’s growth is slowing and that Korea should now look to Europe.

Since its inauguration in May, the Yoon Suk-yeol administration has been showing a shift in the country’s diplomatic policies, making moves to bolster its alliance with the United States regardless of complaints from China.

The previous Moon Jae-in administration tried to maintain a balance in navigating relations between China and the US, as it sought to avoid unfavorable treatment from its biggest trading partner China.

Despite opposition from Beijing, the Yoon administration was quick to join the Indo-Pacific Economic Framework for Prosperity as a founding member in May, as the US-led economic initiative is widely seen as a regional grouping intended to contain China’s rise in the region.

After the US deployed the anti-missile system here in 2017, China retaliated by boycotting South Korean goods, causing great losses to the South Korean economy at the time. 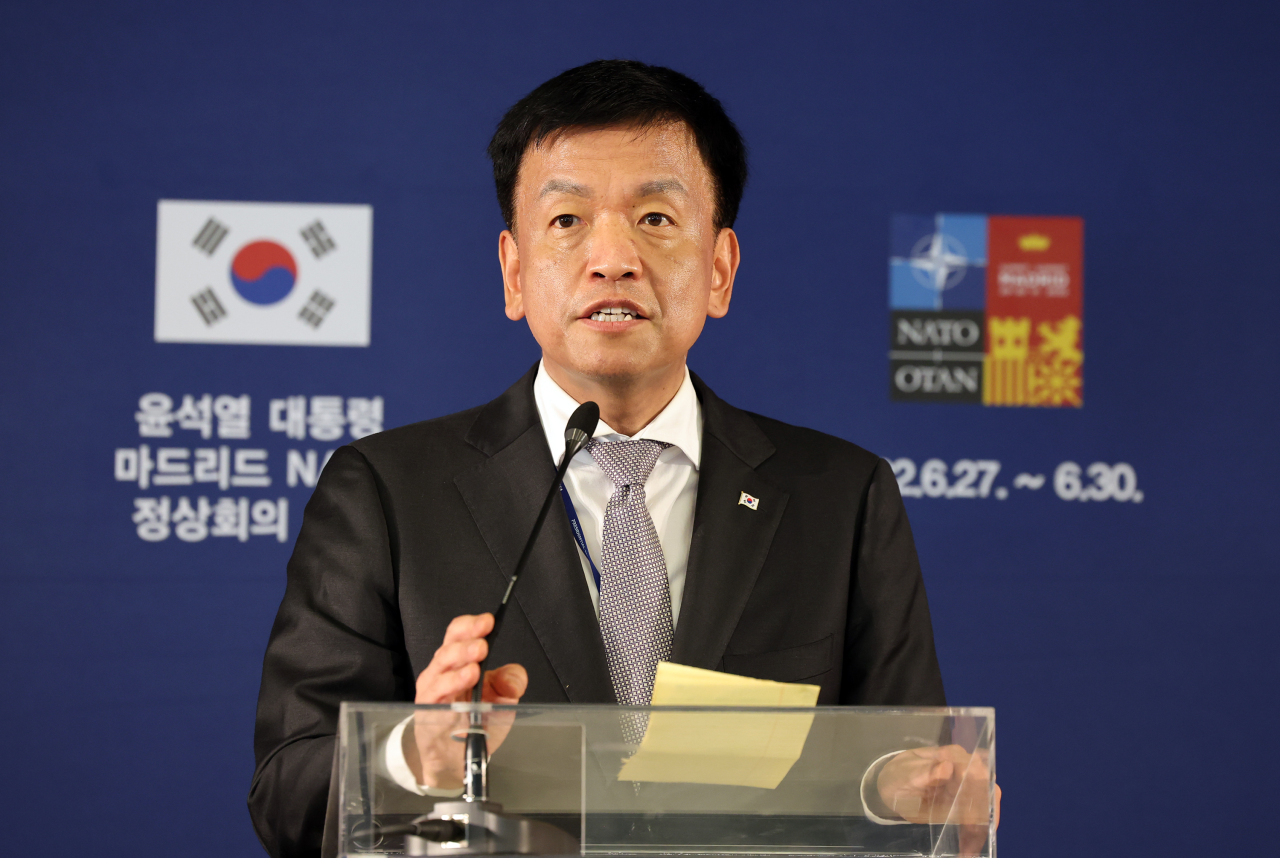 Seoul’s senior presidential secretary for economic affairs Choi Sang-mok speaks at a press conference in Madrid, Spain on Tuesday. (Yonhap)
Yoon is also currently taking part in the NATO summit, along with the leaders of three other Asia-Pacific countries -- Japan, Australia and New Zealand. China has expressed strong discomfort, saying the NATO summit would “stir up division and confrontation” in the region.

Seoul’s response to China’s apparent criticism of the developments has been somewhat different from what would have been expected of the previous administration.

South Korean Prime Minister Han Duck-soo called China’s opposition a “lack of courtesy,” and said the government would maintain its own principles and pursue its national interest.

Acknowledging concerns that China might retaliate against South Korea’s actions, Han said the country would tell China that it is wrong to do so.

“When we are pursuing the values and principles that the world respects, and China takes actions unfavorable to Korea’s economy (in retaliation), we should be able to tell (China) it is wrong,”

China continues to voice warnings, saying that South Korea’s tilting toward the US would only complicate its relationship with China.

Chung Jae-heung, a researcher at the Sejong Institute, said the conservative Yoon Suk-yeol government is showing very different diplomatic policies from that of his predecessor, and that the continuing discord with China will ultimately weaken economic exchanges.

“Maintaining good ties with China poses as a difficult mission for the Yoon Suk-yeol administration, when it is joining the US-led efforts to keep China in check,” Chung said.

Chung viewed it unlikely for China to take some kind of retaliatory measures against Korea as Seoul has not done anything it would find threatening. But the strained atmosphere will affect their economic exchanges, as companies would not want to make risky investment, Chung said.

“Political interactions always affect the economy. There is no reason for China to take some kind of a measure to pressure Korea now, but corporation would not want to do business related to China when bilateral relations are soured.”

South Korea already has experienced the negative impacts of relying too much on one country in trade, when the country faced a shortage of the urea solution, and also when China boycotted Korean goods in protest to THAAD deployment. So Seoul understands the need to diversify its trade partners, Nam Chang-hee, a professor of political science at Inha University, told The Korea Herald.

Last year, South Korea grappled with a dire shortage of urea solution, an essential fluid used to reduce emissions from diesel vehicles, when China restricted exports of some materials in order to handle the country’s power crisis.

South Korea imported all of its urea from overseas, with China accounting for 97 percent of that.

“If China again abandons the principle of dealing with political and economic issues separately and does take some kind of economic retaliatory actions against South Korea for its political decisions, China should understand that it will only strengthen the need for Seoul to lower dependence on Beijing,” Nam said.