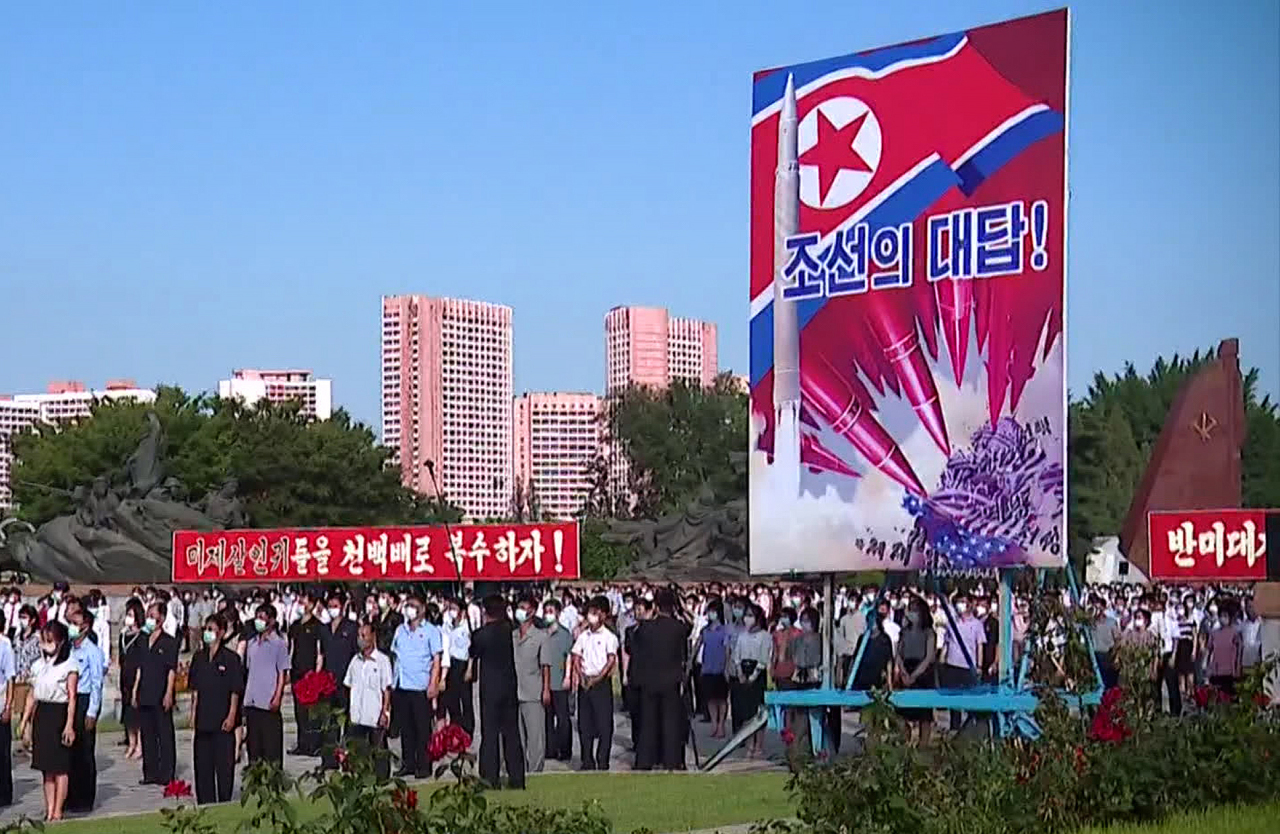 This photo, captured from a clip from North Korea`s Central TV, shows an anti-American youth rally in Pyongyang on June 25, 2022, with a propaganda painting depicting North Korean ICBMs striking the U.S. Capitol. The rally took place on the occasion of the 72nd anniversary of the Korean War. (Yonhap)
North Korea on Wednesday accused South Korea, the United States and Japan of gearing up to establish an “Asian version of NATO,” claiming that the recent move to step up trilateral military exercises is a “dangerous prelude” to that end.

North Korea denounced the US for “heating up military cooperation with its puppets while neglecting the fundamental security demand and concerns in the Asia-Pacific region,” in a Korean-language article carried by the external-oriented Korean Central News Agency.

“The move aims to realize the US-Japan-South Korean triangular military alliance, which is the US’ long-cherished dream, to complete its preparations to invade the DPRK and overpower its rivals including China and Russia to achieve its ambition of dominating the world,” the article said, referring to North Korea by its official name, the Democratic People’s Republic of Korea. The writer was credited as Ri Ji-song, a researcher at the Society for International Politics Study.

Message ahead of trilateral summit
The article was published on the day the trilateral summit between South Korea, the US and Japan is set to be held for the first time in around five years in Madrid, on the sidelines of the NATO summit to discuss North Korea issues.

The KCNA specifically lambasted the three countries for committing to regularizing and publicizing trilateral missile defense exercises and pushing forward the plans. Seoul has previously said the policy shift was aimed to send a message to North Korea.

In mid-June, the South Korean, US and Japanese defense chiefs agreed to openly conduct Pacific Dragon multilateral ballistic missile defense exercises that had been deliberately kept low-key so as not to provoke North Korea. Seoul, Washington and Tokyo also pledged to conduct a missile warning exercise on a quarterly basis during the talks held on the sidelines of the Shangri-La Dialogue.

The KCNA dismissed the recent trilateral move to step up security cooperation against North Korea’s mounting ballistic missile threats as a precursor to establishing an Asian version of NATO.

“The maneuver to forge the trilateral military alliance between the US, Japan and South Korea, which has been accelerated by Japan and South Korea’s blind pursuit of the US, is clearly a dangerous prelude to the establishment of an ‘Asian version of NATO,’” the KCNA said.

The state media said the trilateral exercises specifically target North Korea, given that the Biden administration defines North Korea as one of the major threats destabilizing the region, legitimizing the country’s military buildup in the security environment.

“The reality desperately urges the DPRK to take every possible measure to bolster its self-defensive, military capabilities to protect the country’s sovereignty and the people’s well-being and awakens the countries in the Asia-Pacific region,” the KCNA said.

“The reckless military confrontation racket of the US and its vassal forces, which is rapidly amplifying in the Asia-Pacific region, will only bring about catastrophic consequences of self-destruction.”

North Korea’s claim of an Asian NATO is analogous to China’s repeated statements to undermine the first-ever participation of NATO’s Asia-Pacific partners -- South Korea, Australia, Japan and New Zealand -- in the summit.

Keeping NATO expansion in check
The KCNA published another article on Wednesday to denounce President Yoon Suk-yeol for participating in the NATO summit, where members plan to adopt the trans-Atlantic alliance’s new strategic concept for the next 10 years.

NATO’s new road map reflects challenges posed by China for the first time along with Russia’s threats, which heightens tensions between Western allies and Russia alongside China over the NATO summit.

The KCNA, which mainly targets external audiences, also censured the Yoon government for bolstering cooperation with NATO especially at a time when the US-led NATO seeks to expand into the Asia-Pacific region.

North Korea also criticized the US initiative to forge strong security links between its allies in the North Atlantic and Asia-Pacific areas.

NATO has the clear intent to establish a “confrontational alliance such as AUKUS and the Quad under the pretext of restoring democracy and strengthening the alliance and connecting them to NATO to build a trans-Pacific encirclement to contain and isolate China,” the KCNA claimed in the article. AUKUS is a trilateral security pact between Australia, the UK, and the US. The Quad a US-led strategic security dialogue between Australia, India, Japan and the US.

The country pointed out that the US also aims to “seek regional hegemony in Asia with South Korea as cannon fodder in the same way as it pursues to maintain ‘US-style international order’ at the price of European countries’ blood.”

Against that backdrop, Seoul’s recent move is likely to aggravate the security situation on the Korean Peninsula, although the South might believe it could address the security concerns if it comes under the NATO umbrella, the report claimed.

“The South Korean authorities will go through an extremely painful and grave security crisis and suffer from long-term, incurable security anxieties as they now hold NATO’s dark hands,” the KCNA said in the Korean-language report.

The state media also warned that NATO’s pursuit of expanding its clout in the Asia-Pacific region could provoke NATO’s adversaries and strategic competitors to reinforce military buildup.

“Asia-Pacific countries, regarded by NATO as adversaries and strategic competitors, are never inferior to others in their wills and abilities to protect themselves from interference and aggression of outside forces,” the KCNA said. “It is only a matter of time before the NATO ship, which diverts its course from the North Atlantic to the Asia-Pacific, is doomed for shipwreck.