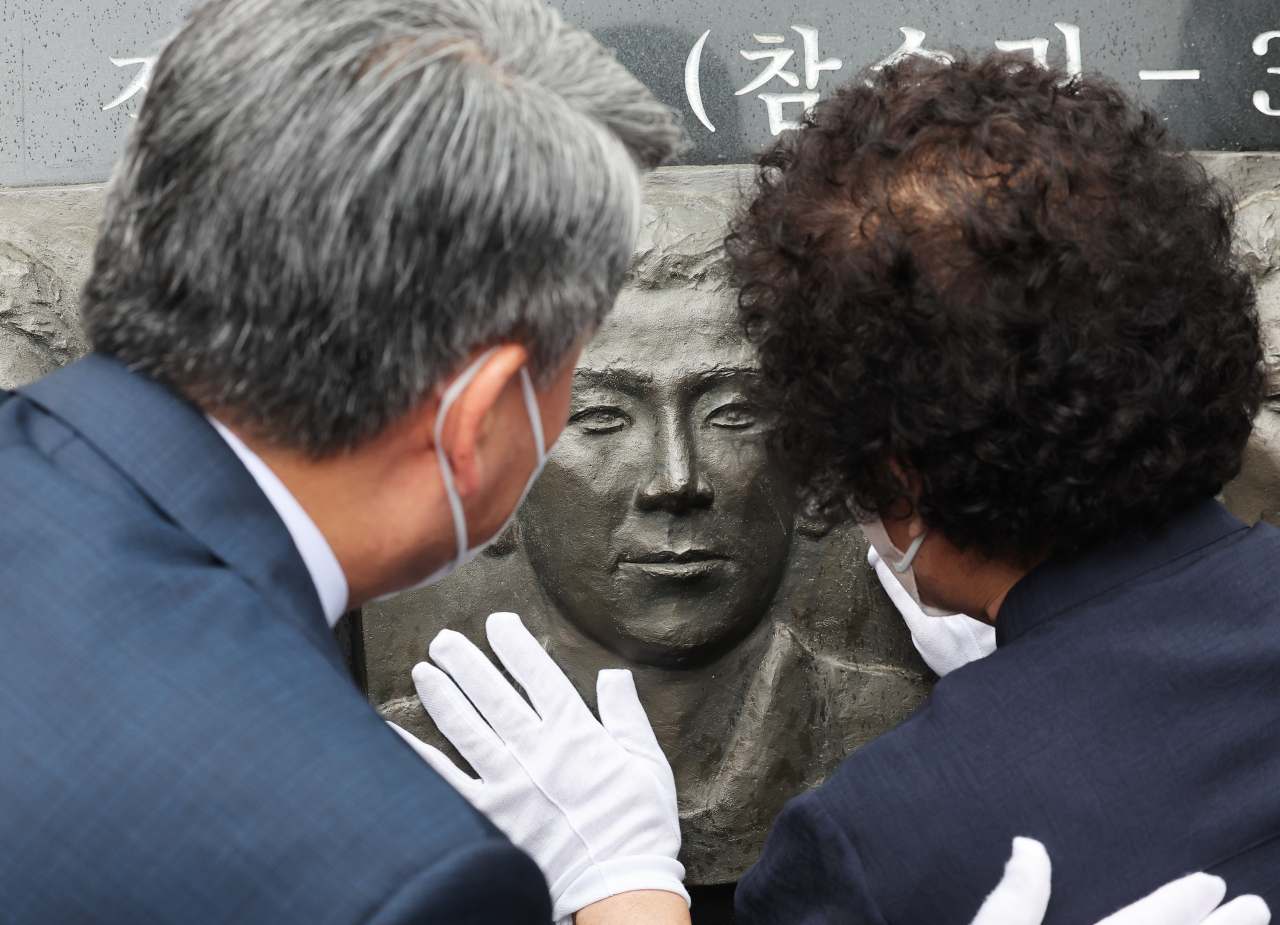 A bereaved mother touches the sculpture of her son, who died during an inter-Korean naval skirmish near the western sea border two decades ago, at the Navy's Second Fleet in Pyeongtaek, 70 kilometers south of Seoul, on Wednesday. (Yonhap)

PYEONGTAEK -- South Korea's Navy on Wednesday held a ceremony to commemorate the sacrifices of sailors killed in an inter-Korean naval skirmish near the western sea border two decades ago.

The memorial event took place at the Navy's Second Fleet in Pyeongtaek, 70 kilometers south of Seoul, with the attendance of some 300 people, including the sailors' families and fellow troops.

The naval conflict occurred near the South's frontline island of Yeonpyeong on June 29, 2002, as two North Korean patrol boats crossed the Northern Limit Line (NLL), the de facto maritime border, and launched a surprise attack on the South's Chamsuri-357 warship.

It left six South Korean sailors dead and 19 others injured. Around 30 North Koreans were thought to have been killed or wounded, according to the South's Navy.

The 2002 skirmish is also known as the Second Battle of Yeonpyeong, as it followed a similar naval clash near the border island in 1999 that left seven South Korean sailors injured.

Starting this year, the Navy named the anniversary event the "victory" ceremony to honor the sailors who dedicated their lives to safeguarding the country's waters south of the NLL.

"The second Yeonpyeong battle was a victorious naval fight in which our service members blocked the North's provocations with their whole bodies and inflicted huge damage on the enemy," Defense Minister Lee Jong-sup said. "It's a proud piece of South Korea's history."

Saying aloud the name of each fallen soldier, Lee also stressed, "Your noble sacrifices will not only remain in our hearts, but also stay alive in South Korea's history for good."

During the ceremony, the bereaved families participated in a wreath-laying event aboard Navy ships that bear the names of the fallen sailors.

The Navy currently operates six high-speed guided missile ships that have been named after the late sailors to continue their unfinished mission of defending the waters and frontline islands near the NLL.

The NLL used to be a flashpoint of the Korean Peninsula, as the North disputed the NLL, arguing it was drawn unilaterally by the US-led UN Command after the 1950-53 Korean War.

But tensions near the boundary appeared to have gone down as the North shifted its military focus to its nuclear and missile programs, with the South pushing to foster lasting peace on the peninsula. (Yonhap)