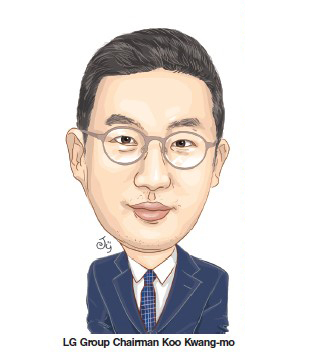 LG Group Chairman Koo Kwang-mo on Wednesday marks his fourth anniversary at the helm of the nation’s fourth-largest conglomerate, with his leadership taking shape, though not yet completed.

Koo, then 40, took office as chairman and CEO of LG Corp., the holding unit, on June 29, 2018, following the death of his father, Chairman Koo Bon-moo. He was the youngest person to lead one of the nation’s top four chaebol groups, which also include Samsung, SK and Hyundai Motor.

Pragmatism is a keyword that defines his four-year tenure.

One of the key moments of change was when LG Electronics decided to ditch its decades-old smartphone business last July.

The group’s crown jewel was suffering from chronic operating losses as its smartphone business had long been sandwiched between top two players -- Samsung and Apple -- and Chinese runner-ups with cheaper pricing. But it was a tough decision to depart from a symbolic market where LG had a 26-year history.

But Koo pushed ahead with the withdrawal plan to focus resources on more futuristic areas like automotive solutions and artificial intelligence. For the same reason, the firm withdrew from the solar power panel business in March this year.

“Internal communications have become more flexible and speedier, and the overall decision-making process is getting faster,” said an LG official who wished to be unnamed.

Industry watchers say the young leader’s practical leadership may have helped improve profitability across LG companies but now is the time for him to show a clearer and bigger vision for the future.

LG has long been known for its founding philosophy -- harmony among people -- that prioritizes stability over change. Largely due to such corporate culture, LG companies are rarely involved in family feuds over ownership or disputes with business partners. But stressing pragmatism still seems to fall short of being able to shed itself of the image that it is lacking in innovation and aggression.

Those burgeoning fields are still in their nascent phases, with huge resources being poured with little profits in sight. Adding to the uncertainty is the gloomy outlook for the global economy amid widespread fears of an economic downturn.

A senior official within the tech industry, who spoke on condition of anonymity, said Koo has streamlined LG’s business portfolio in the past four years, and that his practical approach has helped improve profitability overall.

“His true leadership will be evaluated in the coming years through the performance of LG’s future growth drivers,” the official said.