“Chaekgeorido with Plum Blossoms” from the 19th century is on display at the exhibition “Prayer for Life: Special Exhibition of Korean Polychrome Painting” at MMCA Gwacheon. (MMCA)
A 3-meter-long folding screen shows a variety of books, fruits and other assorted items on bookshelves. The bright colors -- mainly blue, green and yellow -- are used to depict the items that symbolize prosperity. An old plum tree stretches across the panels of the folding screen.

The 19th-century folding screen painting “Chaekgeorido with Plum Blossoms” is on display at National Museum of Modern and Contemporary Art, Korea in Gwacheon, Gyeonggi Province, as part of the exhibition “Prayer for Life: Special Exhibition of Korean Polychrome Painting.”

The Korean painting genre “chaekgeori,” or also spelled as “chaekkori,” from the Joseon era is an example of how colors were employed in traditional paintings. The colors are vivid but are presented in harmony, giving them a natural vibe.

Ink wash paintings -- brush paintings executed with black ink -- are the dominant genre in most people’s minds when it comes to traditional Korean painting. The term “people of white garments,” referring to Korean people, and Joseon-period white porcelain jars are often thought to represent Korean aesthetics.

However, many colors were used in paintings as well as buildings. In architecture, “dancheong,” or traditional decorative coloring on wooden structures, were a common feature of traditional Korean buildings. In art, chaekgeori paintings that originated from royal paintings but later came to be regarded as “minhwa,” meaning folk painting, are traditional color paintings.

Minhwa paintings that bloomed in the late Joseon era prevailed among common people while some originated from court paintings like chaekgeori. The subjects in the paintings such as fruits, letters, flowers and animals and those that symbolize prosperity -- peonies, pomegranates and watermelons -- frequently appear in the paintings.

“Minhwa is unique art because the genre only exists in Korea. There is no such art in other countries where people did a painting using primary colors, making a wish at the same time,” Youn said.

Experts regard the tomb mural paintings from the Goguryeo Kingdom (37 BC–AD 668) as crucial in the development of Korean polychrome paintings. Goryeo Kingdom (918-1392), which was based on Buddhism, also left valuable Buddhist paintings that used color, but only a few remain today. In the Joseon era when Confucianism prevailed, polychrome paintings were developed by court painters and later became prevalent among folk paintings.

Jinju National Museum and Rhee Seund Ja Jinju Museum of Art jointly held the exhibition “The Flow of Korean Polychrome Paintings” attracting some 71,000 visitors from March 22 to June 19, an exceptional number of visitors for a single exhibition, according to the two museums. 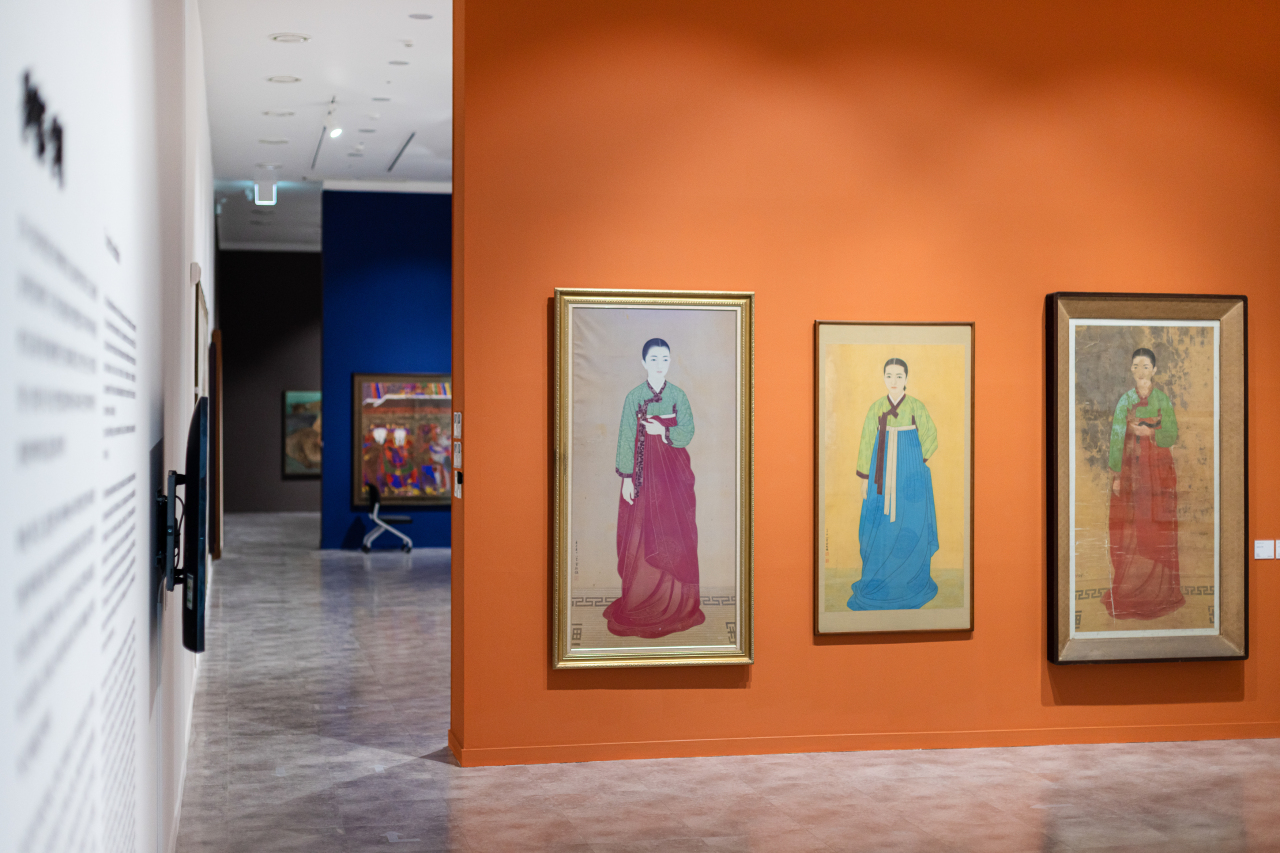 “Of course it depends on the period, but is it not correct to say Korea’s traditional paintings are rooted in ink wash paintings,” Lee said.

“After the liberation from Japan, Korean painters avoided pursuing polychrome paintings because they did not want to invite misunderstandings from the art circle,” said Chung Joon-mo, a former chief curator at MMCA and the director of the Korea Art Authentication and Appraisal Research Center.

Painter Park Saeng-kwang (1904-1985) was one of those artists. After studying art in Japan, he was rejected from the Korean art circle after Korea’s liberation from Japan, viewing his art as Japanese-style color paintings. A few years before his death, Park unveiled paintings in his own style, depicting Korean historical events using primary colors. 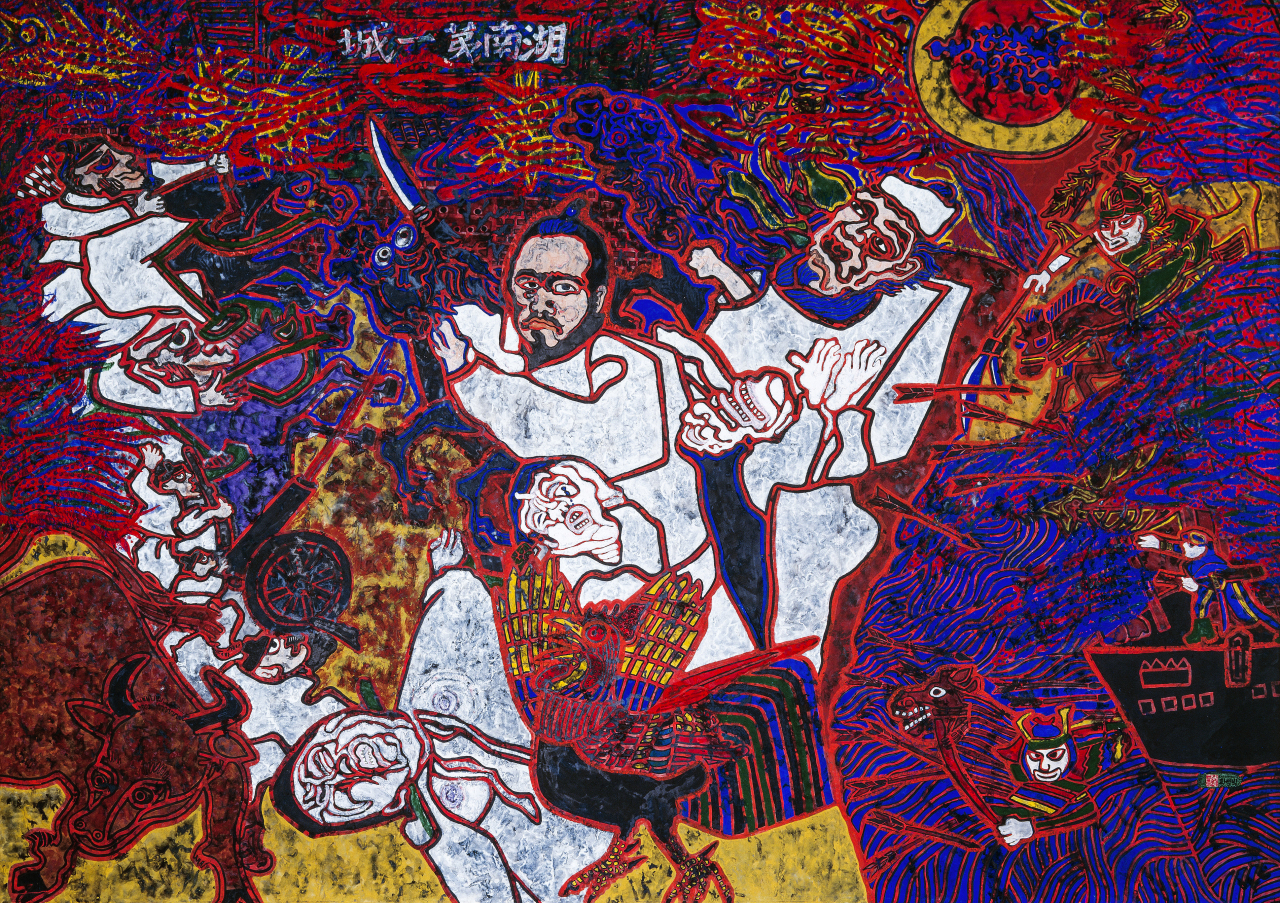 “Jeon Bong-jun” by Park Saeng-kwang at the exhibition “Prayer for Life: Special Exhibition of Korean Polychrome Painting” at MMCA Gwacheon (MMCA)
“He innovated his work, changing his coloring style in his later years,” Youn of MMCA said.

In recent years, minhwa has grown in popularity with an increasing number of people practicing the traditional folk art genre as a hobby and younger artists taking inspiration from it. Minhwa painter Oh Soon-kyung, who is showing five paintings inspired by minhwa at the MMCA exhibition that is running through Sept. 25, is one such artist.

Oh’s painting series, “The Five Guardian Deities,” shows five beasts that protect the five cardinal directions, prevalent in shamanism and Taosim -- a red phoenix in the south, black tortoise in the north, white tiger in the west, yellow dragon in the center and blue dragon in the east. Two to 3-meter-tall artworks are painted with pigments on hanji, or traditional Korean mulberry paper.

Further study on polychrome paintings of Goguryeo murals, minhwa, and today’s color painting is needed, according to experts.

“There are many artists who pursue traditional coloring techniques and materials even at universities. But we need more studies about Korea’s traditional art, which has been stalled since the 1970s,” said Chung Yeon-shim, a professor at the art studies department of Hongik University and a lead author of “Korean Art from 1953: Collision, Innovation and Interaction” published by Phaidon in 2020.