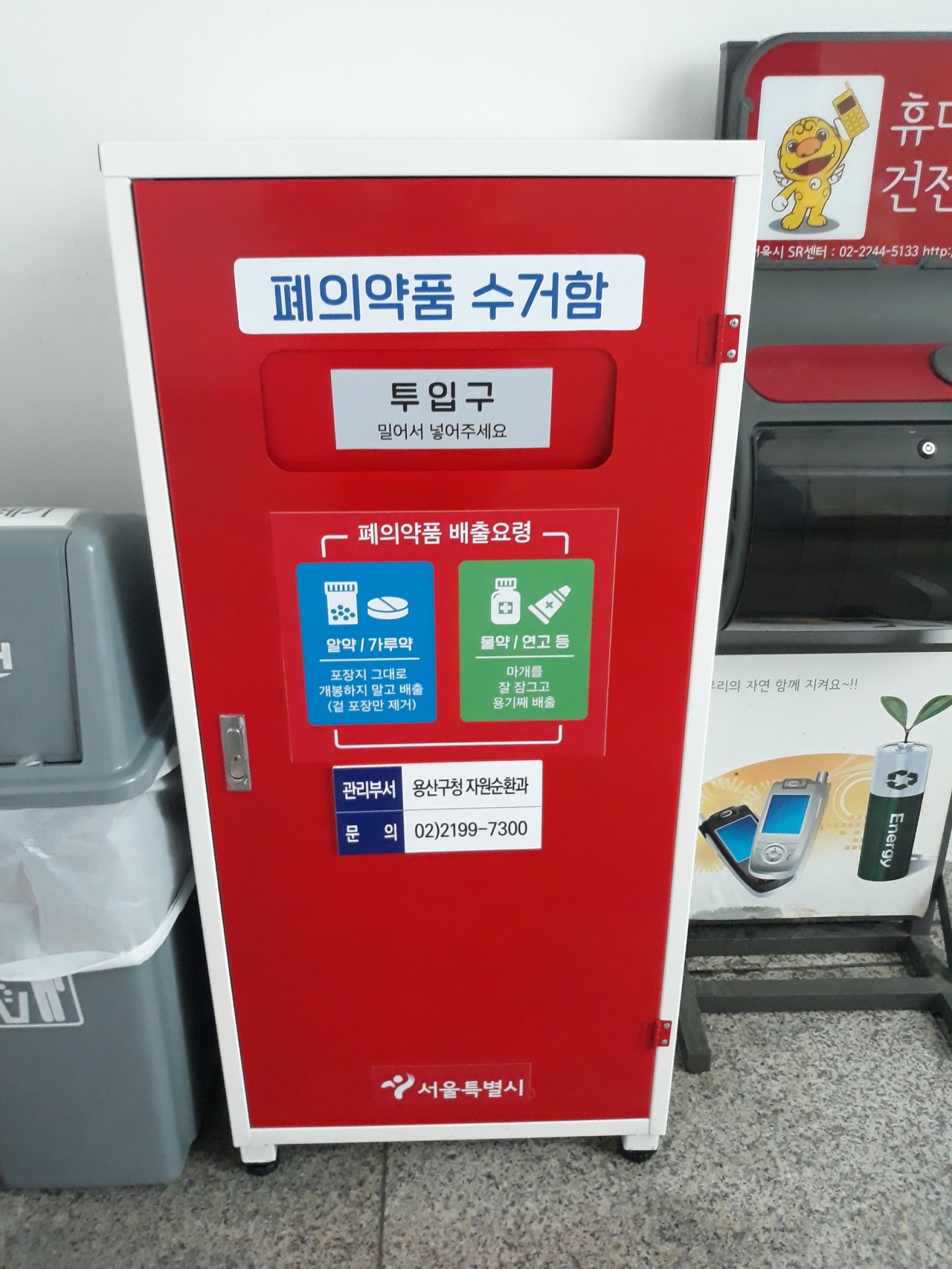 A designated drop-off box at a community center in Yongsan-gu, central Seoul. (Hwang Dong-hee / The Korea Herald)
Only a handful of people living in Seoul have discarded unused or expired medicines at designated drug take-back sites, despite a majority of people saying that they are aware of the environmental issues surrounding pharmaceutical waste.

According to a report published by the Seoul Institute, 20.1 percent of respondents answered that they “never use the designated sites,” while 29.7 percent responded that they “seldom use the sites.”

To be specific, the figure varied depending on the medicine types: 12.6 percent have visited pharmacies or health centers for appropriate disposal of liquid medicines; 13.1 percent for ointments, 16.9 percent for powdered medicines, and 22.6 percent for pills.

“I knew that you can drop off the expired medicines at some pharmacies … But it’s just too awkward to drop by a pharmacy and hand over a few pills,” said a woman in her 20s, surnamed Park.

Similar to Park’s case, 43.8 percent of the respondents cited long distance for not using the designated sites frequently, while 35.5 percent said they felt uncomfortable dropping off at pharmacies or health centers.

Instead, about 24.7 percent to 46.5 percent -- depending on the medicine types -- of respondents said they threw the pharmaceuticals away as general waste. For liquid medicines, in particular, about 16.1 percent flushed them down in toilets or discard them in sinks.

“When people throw away pharmaceutical waste unattended, it flows into the land or rivers. With current filtering technology, the level may be low, but then, people are still exposed to pharmaceutical residues -- chronically and unnecessarily,” said Choi Kyung-ho, a professor at Seoul National University.

Earlier this year, the Han river placed 43rd among 137 rivers worldwide for the cumulative concentration of pharmaceutical pollutants, according to a University of York study. Traces of 23 drugs were found among the 61 pharmaceuticals the study monitored.

The study tracked 1,052 sampling sites along 258 rivers in 104 countries of all continents, across 137 geographic regions.

Although the Metformin levels found were not serious enough to warrant immediate concern, attention to the long-term effect of chronic exposure to different drugs is needed, Choi said.

“The side effects of pharmaceuticals in rivers on humans are still largely unknown … But there’s no evidence that it is safe. There are already well-established studies that pharmaceuticals threaten the environment by directly affecting the living organisms. And humans are, eventually and ultimately, affected by this.”

Other drug substances found include: Gabapentin, used for treating partial seizures and nerve pain; caffeine, a stimulant in coffee; Sitagliptin, medication for treating diabetes; and Cotinine, a product formed after nicotine enters the body.

Meanwhile, Seoul installed 522 new designated drop-off boxes at public facilities, such as community centers and health centers, from December to January this year.

Since then, the total collected amount of monthly pharmaceutical waste in Seoul increased from 7.47 metric tons in 2021 to about 10 tons in January-April in 2022, according to the Seoul Metropolitan Government.

“The city is also promoting ‘drug take-back day’ in multiunit houses and apartments, so people can easily throw away the drugs on a monthly basis. About 148 multiplex houses are participating right now. We are in the process of expanding the project,” a Seoul city government official said.