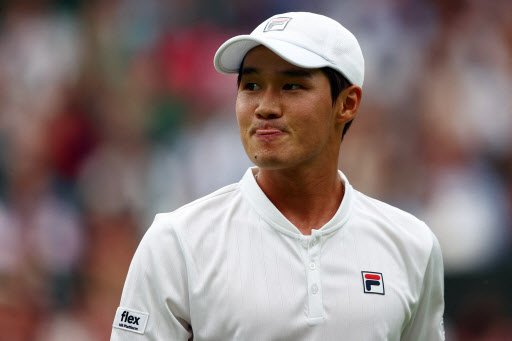 In this AFP photo, Kwon Soon-woo of South Korea reacts to a play against Novak Djokovic of Serbia during their men's singles first round match at Wimbledon at All England Club in London on Monday. (AFP)

South Korea's Kwon Soon-woo lost to defending champion Novak Djokovic in the opening round of Wimbledon in London on Monday, battling the 20-time Grand Slam winner for nearly two and a half hours before running out of gas.

Djokovic, world No. 3 going for his seventh Wimbledon title, defeated the 81st-ranked South Korean 6-3, 3-6, 6-3, 6-4 on Centre Court at the All England Club in the English capital.

Kwon has now dropped both of his matches against Djokovic.

Kwon jumped out to an early lead in the opening set. At 1-1, Kwon broke Djokovic, thanks to a couple of forehand winners, and then held his serve to go up 3-1.

But then Djokovic battled back to win the next five games and take the set, breaking Kwon twice in the process.

Kwon again built a 3-1 lead in the second set. This time, Kwon didn't relinquish that lead and took the set 6-3 to even the match. Kwon broke Djokovic twice, while Djokovic failed to convert three straight break points in the fifth game.

In the third set, the players traded the first seven games before Djokovic, leading 4-3, broke Kwon to go up 5-3. Djokovic then made quick work of Kwon in the next game, highlighted by a pair of aces, to claim the set at 6-3 and grab a 2-1 lead in the match.

Now with his back against the wall, Kwon got broken to fall 3-2 in the fourth set, and then let Djokovic move ahead 4-2 with a quick game.

Djokovic had 14 aces to Kwon's seven. Kwon did have more winners than Djokovic, 31-30, but had five double faults and converted just two of his six break points.

Kwon is the top-ranked South Korean on the ATP Tour. This was Kwon's third appearance at Wimbledon, and he has not yet advanced past the second round.

The deepest Kwon has gone at a Grand Slam tournament remains a third-round appearance at the 2021 French Open.

Earlier this year, Kwon lost in the second round at the Australian Open but fell in the first round at the French Open. (Yonhap)