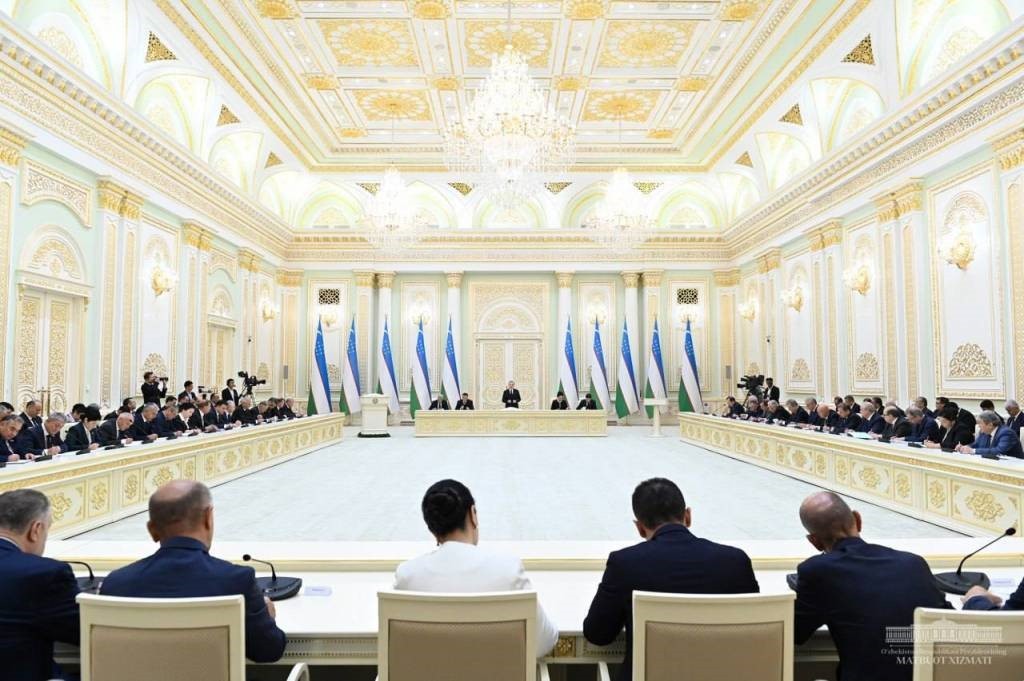 Uzbekistan President Shavkat Mirziyoyev holds a meeting with members of the Constitutional Commission. (Embassy of Uzbekistan in Seoul)
Uzbekistan is preparing to process constitutional reform seeing important political realities and needs of Uzbek citizens, the Uzbek Embassy in Seoul said in a press statement Friday.

According to the statement, Uzbekistan President Shavkat Mirziyoyev held a meeting with members of the constitutional commission on June 20, recognizing the need to create a solid legal basis for reliable long-term development strategies for Uzbekistan to achieve people-centric future prosperity through constitutional amendments.

Uzbekistan is committed to the idea of human dignity stated in Uzbekistan‘s constitution and the “Person – society – state” approach as the main principle of current reform, the statement read.

The embassy highlighted Uzbekistan’s four priorities and directions. The first priority upholds person, life, freedom and dignity, inviolable rights and interests. The second consolidates the idea of Uzbekistan as a social state, the state‘s concern for all Uzbeks domestically and abroad, and their entitlement to the constitution. The third clearly defines the status of mahalla and state bodies’ responsibilities. While the fourth focuses on improving public administration and strengthening democracy.

According to the statement, proposals summarized by the Constitutional Commission will be submitted as a legislative initiative to the lower house of parliament by deputies of the Legislative Chamber in the future.

Parliament has the authority to independently introduce amendments to the constitution under the current legislation of Uzbekistan. However, the president proposed adopting the draft constitution through national discussion and referendum, said the embassy.