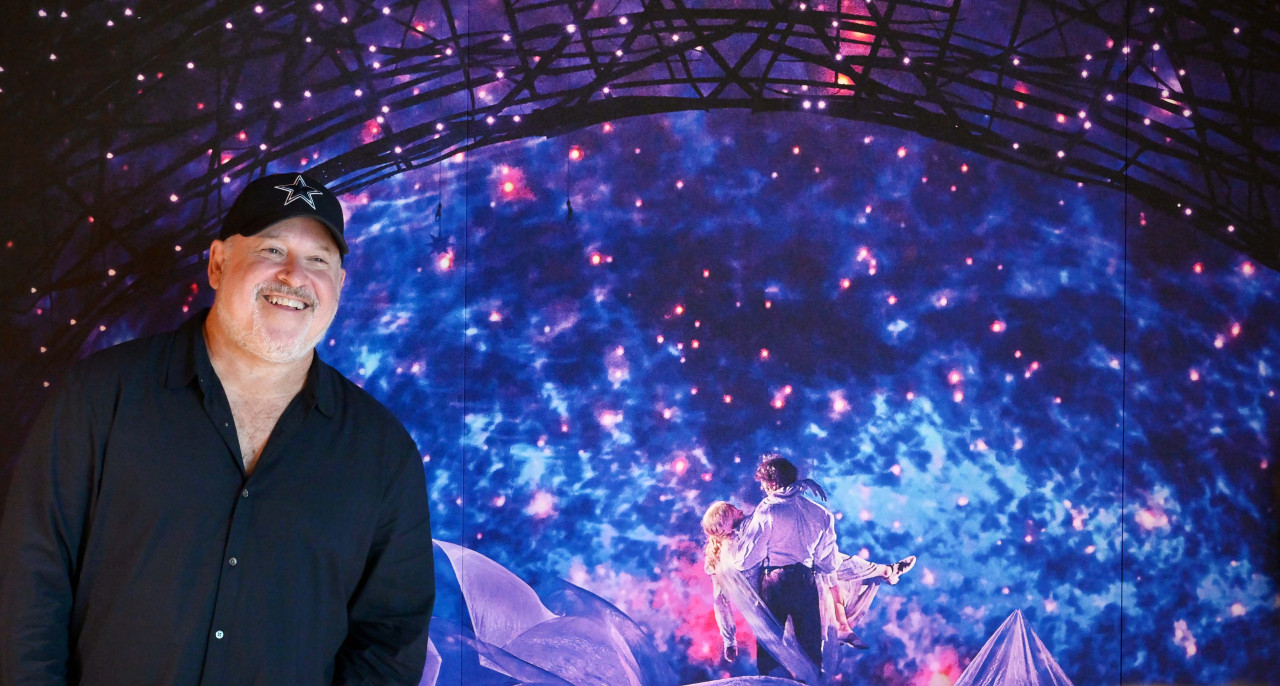 Composer Frank Wildhorn poses for photos during an interview in Seoul on Thursday. (Lee Sang-sub/The Korea Herald)
There was one common element at four different theaters across South Korea on Thursday night. They all staged the music of American composer Frank Wildhorn, the great mind behind musicals “The Man Who Laughs,” “Death Note,” “Mata Hari” and “Jekyll & Hyde.”

“That’s 7,000-8,000 people every single night listening to my music … all I can say is that I’m the luckiest guy,” Wildhorn said in an interview with local reporters the same day. Though he will never meet most of these people, he realized that he can still have a chance to touch their lives and “hopefully give them some great memories.”

This is the first time four of his pieces are running at the same time. His previous record was three musicals -- “Jekyll & Hyde,” “The Scarlet Pimpernel” and “The Civil War” -- which ran simultaneously on Broadway in 1999.

About two decades ago, he began working with production companies outside the US, in Europe and Asia. He recalled that at that time, the Asian market was very divided. Productions and industry players were separate from each other and still going through growing pains, according to Wildhorn.

Now the Asian market has become the biggest in the world, he said, adding, “I’m proud to be a small part of its evolving history.”

“There is this wonderful group of young producers who have made it their business to really create and nourish this Asian musical theater business,” he noted. South Korea’s market is unique in that its audience is by far the youngest that he has ever encountered. This young audience has the enthusiasm to watch the same show multiple times, he observed.

Such a youthful audience, which grows up loving musical theater, is “going to keep the industry healthy for years and years to come,” he added.

His involvement in South Korean musical productions has made a difference in the local industry. In particular, his musicals have given up-and-coming talent and local production companies greater opportunities to put their own spins on stories based on Western stories, putting the Korean musical industry on a path to self-sufficiency.

Since he first visited South Korea for “Jekyll & Hyde” 18 years ago, Wildhorn has created three original musicals for Korea: “Tears of Heaven,” “Mata Hari” and “The Man Who Laughs.” “Excalibur” was also originally licensed from Switzerland, but went through a major face-lift in South Korea.

Working in South Korea, the composer said that he admires the skills of Korean musical actors the most. Regarding Kim Jun-su, whom he calls his “Korean brother,” Park Hyo-shin, whose voice inspired him to compose for “The Man Who Laughs,” and Ock Joo-hyun, the motivation behind “Mata Hari,” he said, “Korean actors sing with soul. If they could speak English, I think they would do well on Broadway.”

Kim, Park and Ock all enjoyed great success as K-pop singers and transformed themselves as musical actors. His love for these unconventional musical actors might stem from his own background.

The 63-year-old composer started out as a pop music composer, without any relevant degrees. After making his mark with Whitney Houston’s 1987 song “Where Do Broken Hearts Go,” he entered the musical industry with “Jekyll & Hyde” in 1990.

Always intent on recruiting untapped talent to the musical stage, he also made a proposal to V of powerhouse K-pop boy band BTS, to play a role in “Jekyll & Hyde.” He had watched V testing his mic on stage, singing “This is the Moment,” a well-known number from the musical. That moment was enough to convince Wildhorn.

Although his work has been recognized at awards shows here, there have also been productions that went through a trial-and-error phase.

He thinks that the first production of “Mata Hari,” production company EMK’s first original work made in 2016 which was revised for the second and third productions, would have never seen the stage if it had premiered on Broadway because of the differences in the production processes between New York and Seoul.

The Broadway environment is better for the show, he said, because long before it graces a Broadway stage, the musical goes through an arduous process of presenting in front of investors, a series of reading workshops and performances outside New York, during which the production gets thorough feedback from audiences. “Even with all of that effort, most shows don’t make it to Broadway,” he said.

In the near future, he expects that more original Korean works will be performed on Broadway. The obstacles South Korea’s musical industry faces to growing globally are producers’ reluctance to lose local talent to global productions, as well as the language barriers the actors face abroad.

“I’m currently working on musicals based on Japanese comics, and if they are performed on Broadway in the future, the demand for Asian actors will increase,” he added.