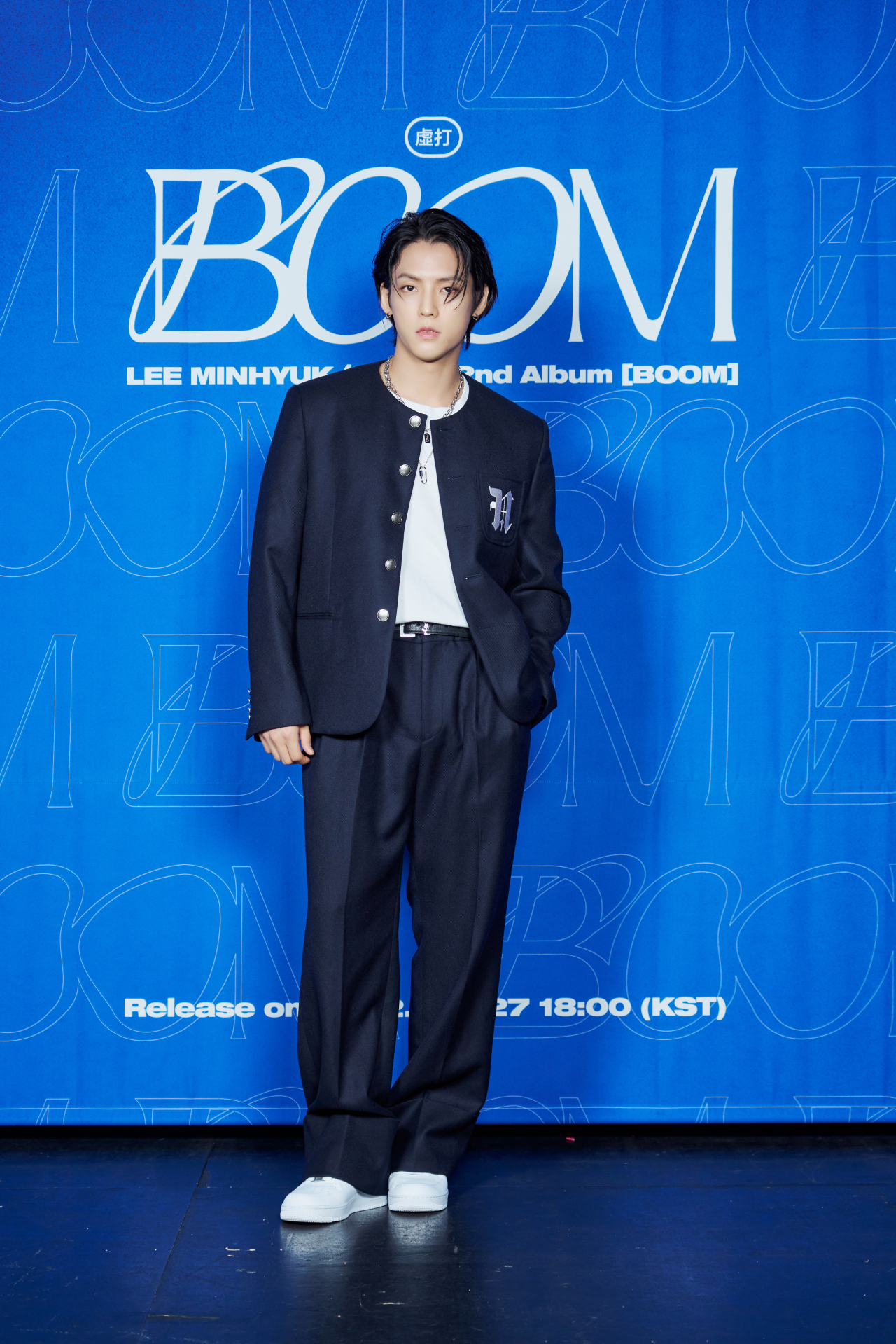 This marks the group member-turned-soloist's return in less than a year, having dropped a digital single titled “Good Night” in November.

“It’s an album that best shows who Huta is as a soloist,” the singer said, referring to his solo alias.

During Monday's press conference, the musician described his new album as “peppered with various musical colors.” He went on to say that the little emotions people felt in life were the biggest inspiration in bringing his sound to the world.

“We experience many feelings in life depending on our situation. I think my album has songs that fit every situation. It’s a jam-packed 12-song package.”

Gushing about his new album, Min-hyuk went on to talk about the titular “Boom,” which is a track with frenzied beats interweaved with a hybrid wonk trap style. The tune will be a unique encounter for Korean pop music lovers.

The keyword for this album is “heavy,” he added. “The overall ambiance, the beat of the song and the performance are aggressive, explicit, and I spit fire throughout.”

The singer took a hip-hop approach for the title track. As the genre is often used to show off about oneself, Min-hyuk took this opportunity to show how well he is doing.

“Remember how I said the album has songs that fit every situation? If you look closely at the lyrics, it came from a time when I was full of confidence. The words might sound a little harsh, but I wanted to convey my boldness, and I think listeners can revel in that energy while listening. I recommend this music when confidence is needed.”

The wunderkind shared stories of how “Boom” came to life. He teased a snippet of a song, saying the line “Boom Shaka Laka” in the hook is his favorite line. “I opted for that phrase as the title, but it wasn't compatible with the image I wanted to present as Huta, so it ended up as 'Boom,'” he said with a grin.

But who is Huta? “Huta is a musical figure that I've been dreaming of since I was young. 'Huta' does music the way I like and presents images and performances I’ve yearned for.” 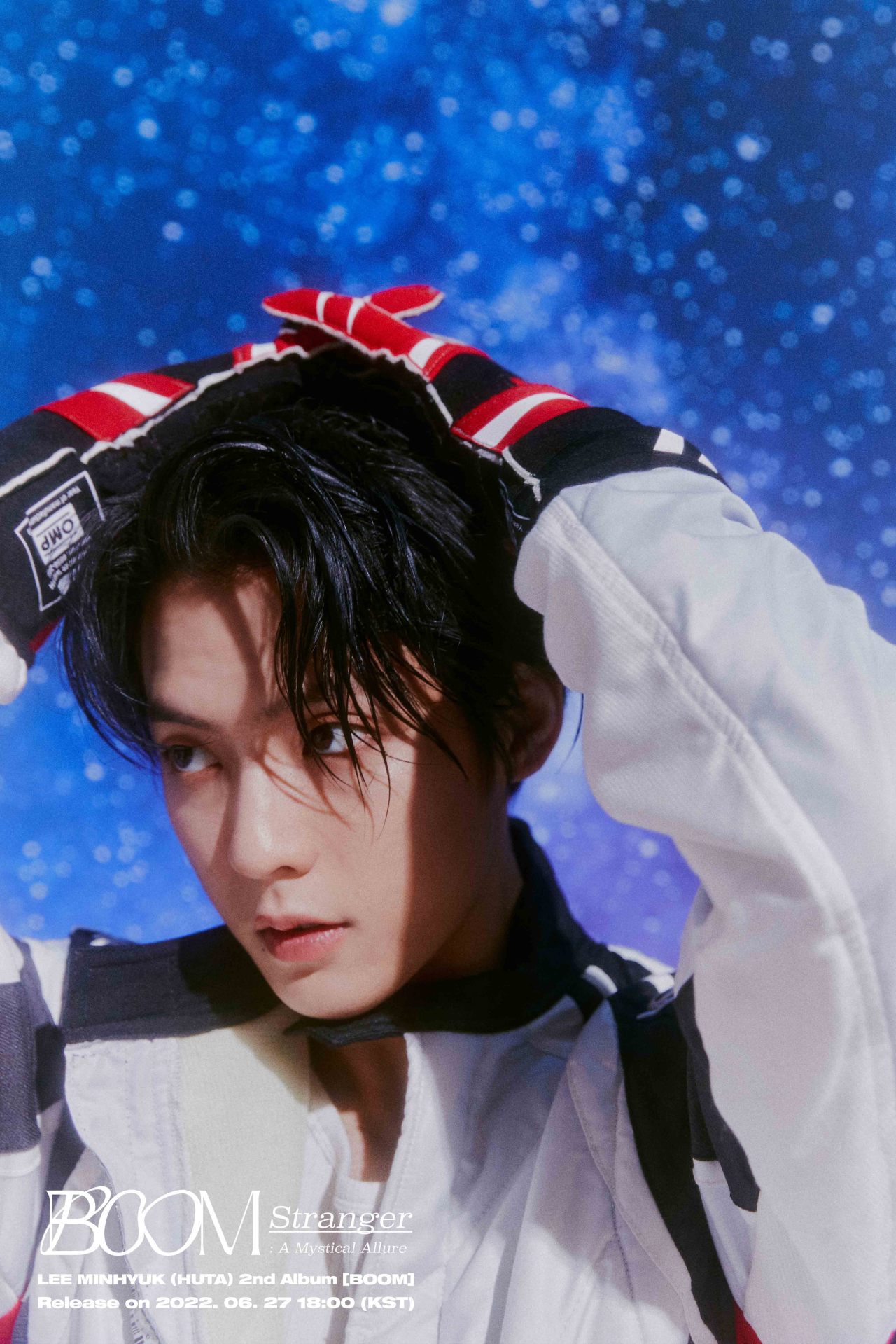 (Cube Entertainment)
Min-hyuk not only wants to display his musical ability through his second LP, but he also expressed hopes of unveiling who “artist Huta” is.

“I want to brand ‘Huta’ through my new album. Hopefully, more people would be able to know that there's an artist that does this kind of music.”

“We all have different preferences, so my music might not land with all listeners, but I think that it is, at least, a piece of 'good music,' and I’m confident about that,” he added.

One thing is for sure; artist Huta has matured since “Hutazone” released in 2019, the singer said, referring to his first solo material.

When asked if he felt he had grown musically, Min-hyuk didn't hesitate: “my second LP will answer that.”

“'Boom' is self-produced, and I’ve wanted to do that since the start. I proved my ability with my first solo album, and I wanted to put out an album that most suits ‘Huta.’”

“My performance and music are different from three years ago. I think I was too young to express some things. It took me nearly a year to produce this album, with writing, recording and arranging,” he added.

Min-hyuk also offered a preview of his upcoming concert, which is set to take place sometime in July.

“It's definitely going to be a fun one. I’ll be performing more dance-based songs during the live session, which means more fun. I'll also be showcasing some tracks for the first time, so that is what people should look forward to,” he laughed.