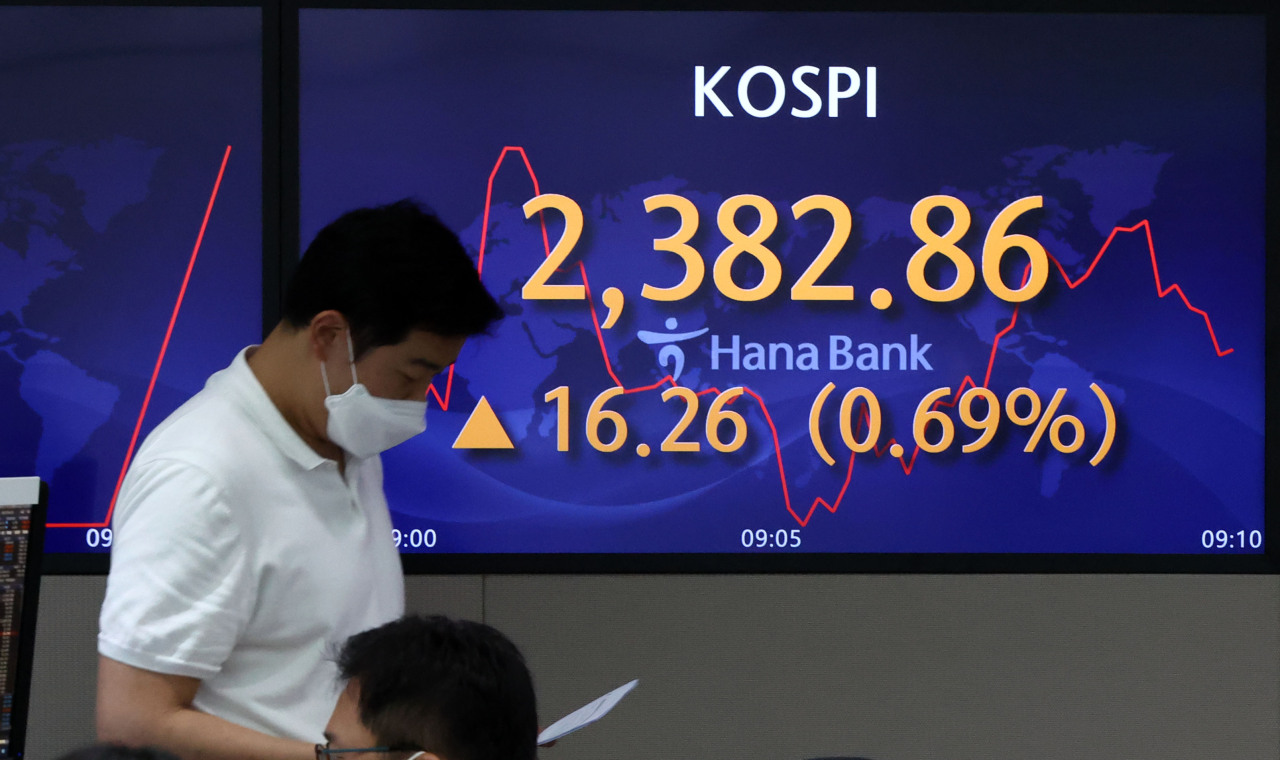 An electronic board at Hana Bank`s dealing room in Seoul shows the benchmark Kospi points on Monday. (Yonhap)
Risks stemming from South Korea’s investor debt binge is a key reason behind the local benchmark stock index’s recent lackluster performance, analysts said Monday. This fueled concerns of a possible market crash as the US Federal Reserve’s aggressive rate hikes have been increasing debt burden on retail investors.

“Following the outbreak of the COVID-19 pandemic, Korea saw a sharp gain in household and corporate debt,” Heo Jae-hwan, an analyst at Eugene Investment & Securities said in a Monday note.

“The US Fed’s and the Bank of Korea’s rate hikes are likely to put further burden on the financial soundness of households and businesses. Some 3 trillion won ($2.34 billion) to 5 trillion won needs to be trimmed off the investors’ outstanding debts for market stabilization,” he added.

Heo’s remarks follow reports the Kospi and Kosdaq both saw the biggest drop among 40 global stock indexes, including inflation-hit Argentina’s Merval S&P, so far this month. The Kosdaq and Kospi each ranked No. 1 and No. 2, respectively, in terms of a drop in market value among 40 key global stock indexes, as the nation’s main bourse fell 11.89 percent from 2,685.90 to 2,366.60, from the end of last month to Friday, while the secondary bourse dropped 15.01 percent from 893.36 to 750.30, in the same period, data from the nation’s sole bourse operator Korea Exchange showed.

Argentina’s Merval reported a 10.49 percent drop in the same period, despite struggling under the influence of Argentina’s high inflation, which grew 60.7 percent in May.

Korea’s “bittoo” movement – a Korean slang term for borrowing to invest, popularized under a record-low interest rate environment -- has somewhat softened since August last year, when the BOK carried out its first pandemic-era rate hike. However, the country continues to struggle with its high household debt level.

Korea had the highest household debt-to-gross domestic product ratio among 36 major economies in the first three months of the year, data from the Institute of International Finance showed earlier this month. The nation’s household debt-to-GDP ratio came to 104.3 percent in the January-March period, followed by Lebanon with 97.8 percent, Hong Kong with 95.3 percent, Thailand with 89.7 percent and Britain with 83.9 percent.

Korea was also the only country whose household debt exceeded its GDP among the 36 economies that include Japan, China, the United States and European Union.

Meanwhile, the total value of debt extended by brokerages for retail investors for the purpose of stock purchase stood at 19.8 trillion won as of last week, compared with some 23 trillion won in the beginning of the year, according to data from the Korea Financial Investment Association.

While the decline in the outstanding debt may seem like a good news, analysts expressed concerns that it may be a warning sign of falling Kospi prices and unwanted stock liquidation.

“The decline in the outstanding debt extended by brokerages doesn’t mean a decline in debt burden as well. The issues regarding the high debt burden needs to be resolved in order for the Kospi to enter a new cycle,” Shinhan Investment analyst Choi Yoo-joon said.

Echoing Choi, Lee Kyung-min, an analyst at Daishin Securities, said: “The retail investors are being forced to cash out from the underperforming market, which is causing deleveraging of supply in the market.”