A parking lot at an apartment complex in Seoul is packed with cars. An increasing number of drivers have been using public transportation instead of private vehicles due to high oil prices. (Yonhap)
The nation’s four refiners -- SK Innovation, GS Caltex, S-Oil and Hyundai Oil Bank -- are expected to post record earnings in the second quarter this year, with sky-high oil prices boosting their operating margins. But they are under heavy social and political pressure as their thriving business means higher energy bills for consumers.

Commodity prices rise and fall dramatically and refiners are sometimes threatened with a tax on their “extraordinary” profit at times of high oil prices. This moment of windfall refinery earnings is no exception.

“There was little discussion about windfall taxes on tech firms during the pandemic. They won big and gave out hefty incentives to retain talent,” said a senior official at one of the four refiners on condition of anonymity. “But we are cautious about compensating our employees due to heightened public scrutiny.”

According to the Korea National Oil Corp. on Monday, the average prices of gasoline and diesel were 2,132.38 won ($1.66) and 2,151.02 won per liter, respectively -- a seventh consecutive weekly surge. Diesel, in particular, has renewed record highs since exceeding 2,000 won for the first time on May 24.

With their second-quarter earnings reports imminent, the four refiners are projected to make a combined 4.8 trillion won in operating profits in the April-June period, according to market tracker FN Guide.

Their refinery margins -- profit excluding costs -- are considered a key indicator gauging profitability of refiners. A tight supply, coupled with both industrial and seasonal surges in demand, is sharply driving up the margin rate.

Several countries like the UK and Spain have already imposed windfall taxes on “excess” oil profits recently, saying oil and gas companies have benefited from the surge in global commodity prices -- in part driven by the war in Ukraine.

Lawmakers here are also floating the idea as a way to help consumers grappling with record-high gas prices amid deepening inflation fears.

“It is ironic that refiners are making record earnings due to high-flying oil prices,” said Rep. Park Hong-geun of the main opposition Democratic Party of Korea, during a party meeting last week. Park said refiners should create a fund to return excess profits or reduce operating margins.

“Despite concerns over a decline in tax revenue, the government has decided to extend tax cuts for fuel use. Refiners should not bank huge profits alone,” he said. 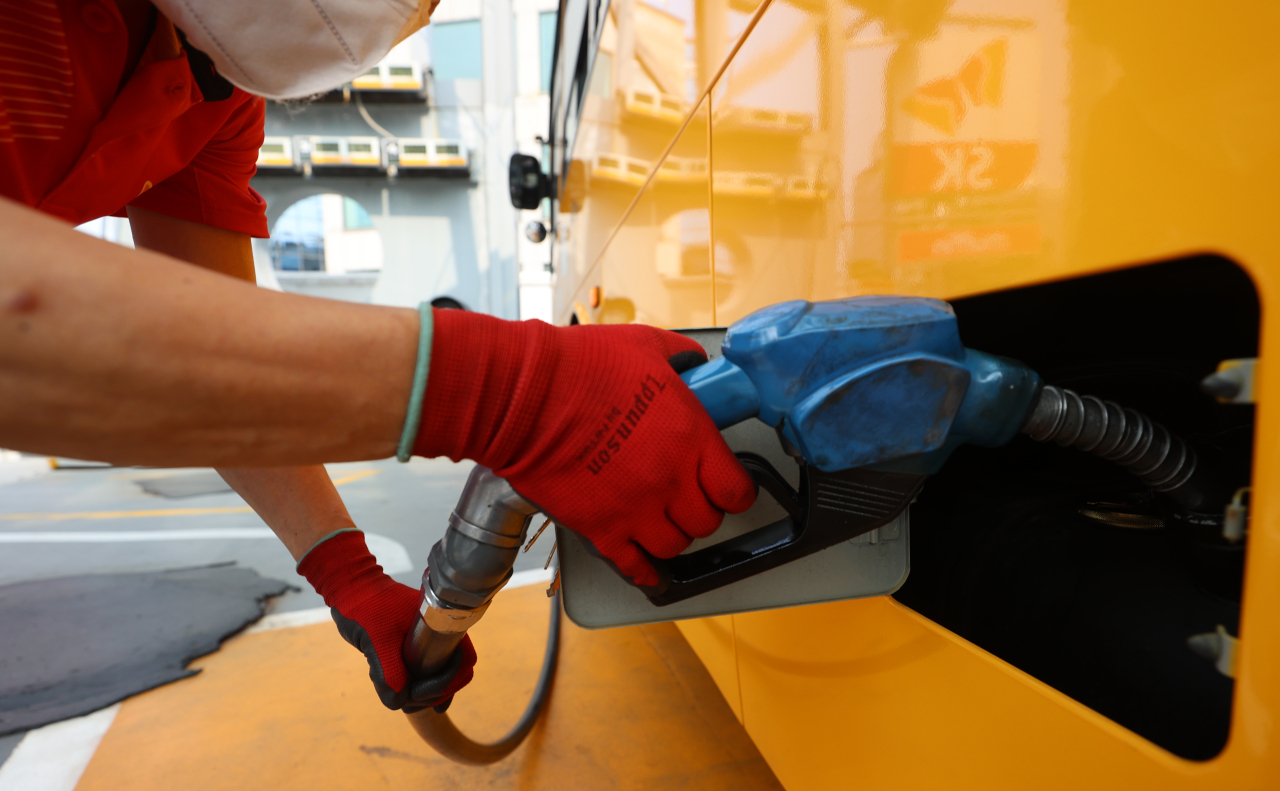 A vehicle is filled up with fuel at a Seoul gas station last week. (Yonhap)
But refiners seem perplexed over the latest move, as their record profits follow years of heavy losses after demand plunged during the pandemic.

"In 2020 when oil prices plunged, losses among the four refiners amounted to some 2 trillion won combined. At the time, we didn’t expect to get compensated over the losses,” said an official at another refiner here who also wished to be unnamed.

"Our current earnings are largely the outcome of price swings. Uncertainties remain intact within the industry.”

“The surging value of their inventory oil could generate profits, but they still face high fuel prices and other growing costs,” said an official of the Korea Petroleum Association, adding that almost 40 percent of their profits come from the trading margins of their oil inventory, not from their core refining business.

“Punishing private companies for excess profits is nonsense not just for the refinery industry, but also for other sectors. Moreover, there are no clear rules and conditions to impose the extra taxes.”

Despite resistance from refiners, Lee In-ho, a microeconomics professor at Seoul National University, says the government has no other option but to regulate refiners’ excess profits to bring down oil prices.

“Because Korea has higher fuel tax rates than in other countries, the government can seek to lower the rate, but it would be a long-term process considering its impact on tax revenue,” he said. “And refiners cannot refine oil at cheaper prices, which means there’s little room to further reduce costs."

"For now, regulating excess profits of refiners seems the only way for the government to control oil prices," Lee added.