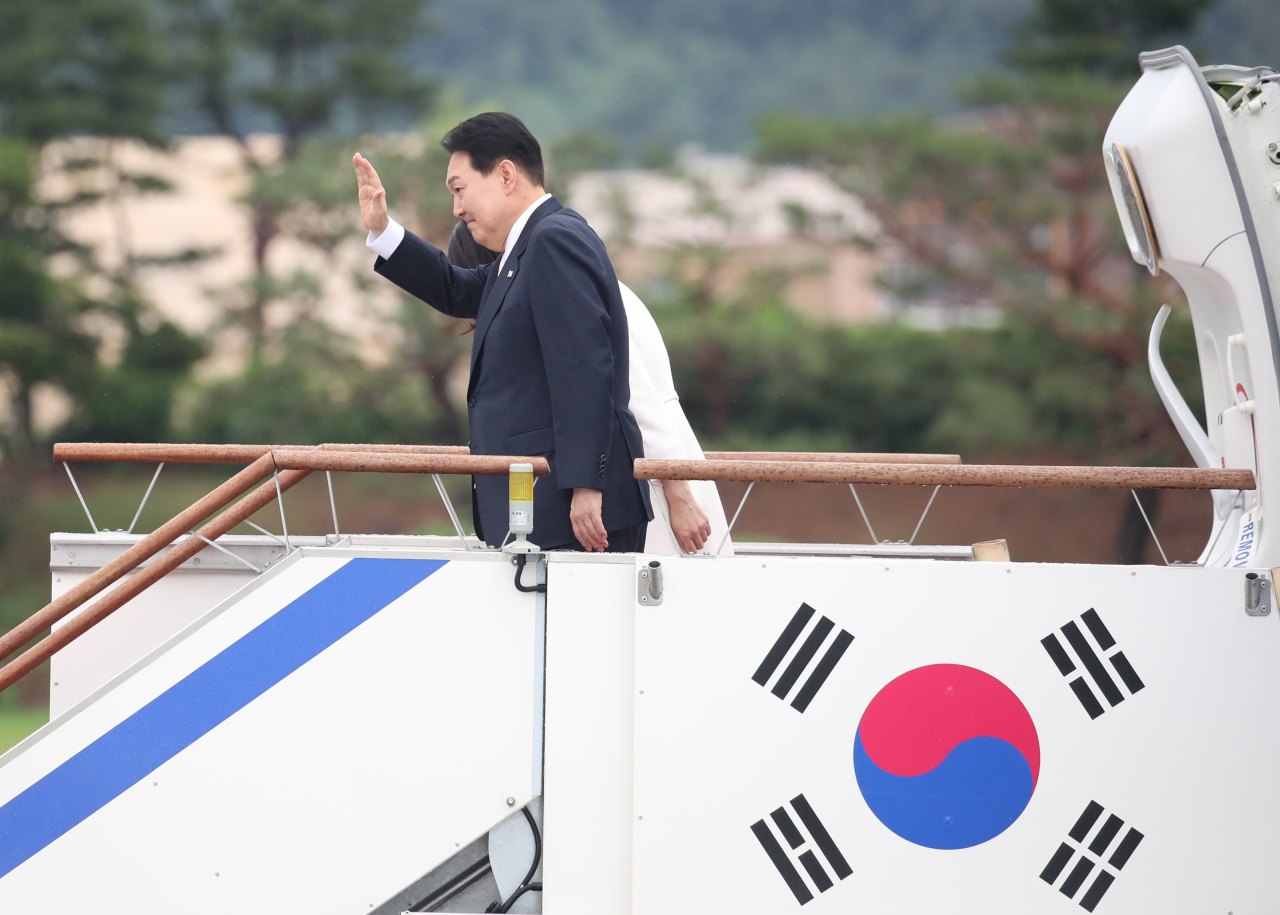 South Korean President Yoon Suk-yeol waves at Seoul Air Base in Seongnam on Monday, ahead of his five-day trip to Spain to attend the NATO summit on his first overseas trip as president.(Yonhap)
As South Korean President Yoon Suk-yeol heads to Madrid to attend the NATO summit, opponents here are raising concerns that his participation in the Western military alliance gathering may have negative impacts on the country’s standing with China.

Rep. Woo Sang-ho, the leader of the main opposition Democratic Party of Korea’s emergency steering committee, expressed concerns on the president’s participation in the NATO summit, questioning if it would secure the national interest.

“Unlike other international summits, the NATO event is a military treaty gathering that can (trigger) a new cold war. It is worrying,” Woo said in a party meeting on Monday.

“There are a lot of concerns that the summit would revive the old political cleavage between the Soviet Union and the US.”

Yoon took off Monday afternoon to attend the NATO leaders’ summit where participating states are expected to discuss ways to tackle China’s rise, among other pending international issues, such as Russia’s invasion of Ukraine.

Rep. Woo Sang-ho, the leader of the main opposition Democratic Party of Korea’s emergency steering committee, speaks at a party meeting in Seoul on Monday. (Yonhap)
China has expressed strong discomfort to the four Asia-Pacific countries -- Korea, Australia, Japan and New Zealand -- participating in the summit as partner countries and slammed the NATO for attempting to expand the bloc confrontation from Europe into Asia.

“The Asia-Pacific is beyond the geographical scope of the North Atlantic. Countries and people in the Asia-Pacific are strongly opposed to anything said or done to extend the military bloc to this region or stir up division and confrontation,” Chinese Foreign Ministry Spokesperson Wang Wenbin said in a press conference Thursday.

Saying that while NATO is a military organization in the North Atlantic by definition and a tool for the US to maintain its hegemony and influence Europe, the spokesperson said some of its members have “flexed their muscles in the Asia-Pacific and sought to replicate the kind of bloc confrontation seen in Europe here in the Asia-Pacific.”

“This is highly dangerous.”

Aware of the accusations, South Korea’s presidential office has denied that the country’s participation in the NATO summit is part of an anti-China policy, and said that it only seeks to expand its international presence.

“We are attending (the NATO summit) to strengthen our network with the NATO member states for our comprehensive security, and there is no link that our participation is in any way related to anti-China or anti-Russia policies,” the presidential office said.

The office added that the president would be discussing a broad range of economic and security issues, including the export of nuclear reactors and building a secure chip supply chain.

The main opposition party, however, warned the president should be cautious, as the NATO summit may result in damage to national interest.

Rep. Woo, the interim leader of the main opposition party, questioned whether the government considered the impacts NATO participation would have on the Korean nationals and companies residing in Russia and China, and urged the president to act “carefully.”

“What would South Korea gain from taking part in NATO? I cannot stop (the president) because he already said he will, but I would like to tell him to act carefully, thinking about the national interest,” Rep. Woo added.

At the summit, Yoon is expected to deliver a three-minute speech in a joint session with NATO member states and partner nations on Wednesday. There he would present his North Korea policies and seek international support to resolve the North Korean nuclear issue, according to the presidential office.