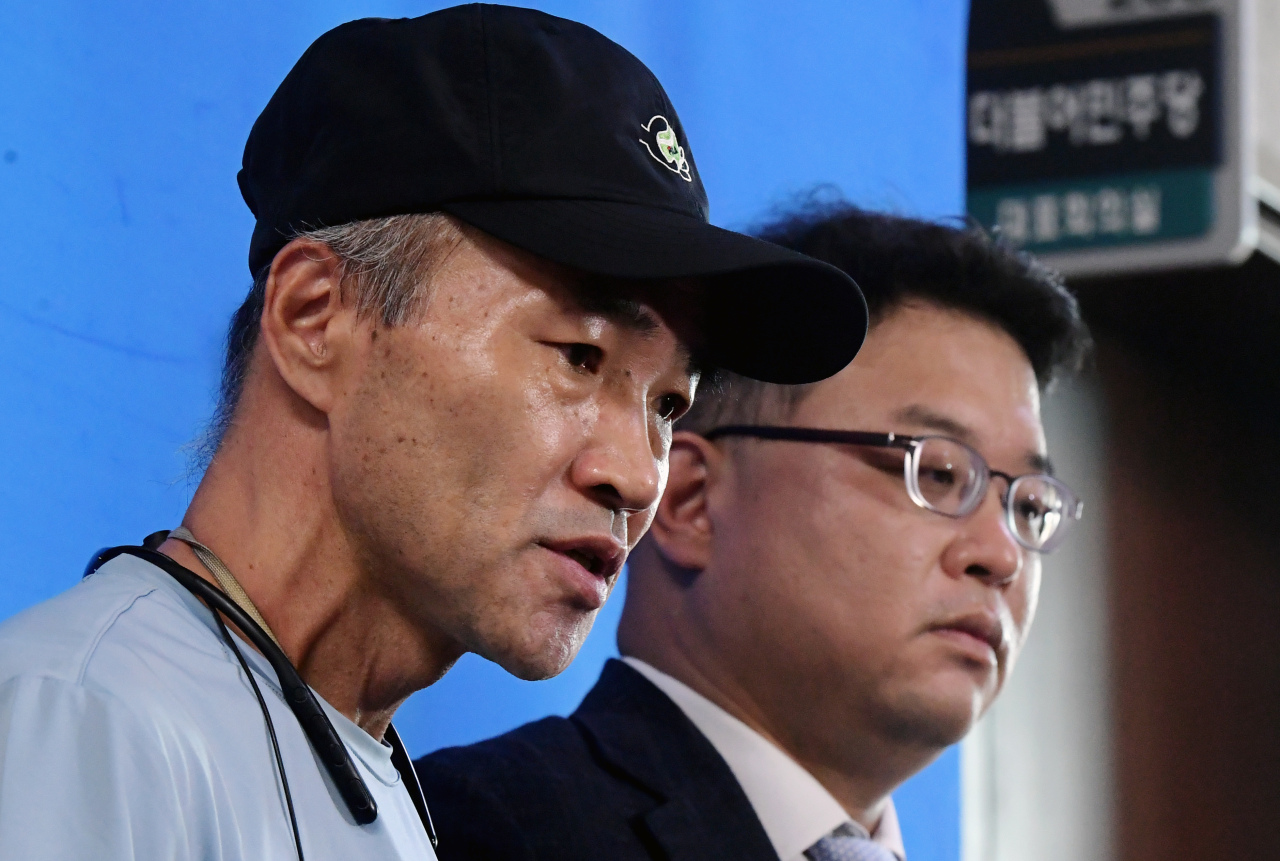 Lee Rae-jin (left), the older brother of the slain fisheries official, speaks to reporters before a closed-door meeting with the Democratic Party of Korea leadership on Monday morning. (Yonhap)
The family of Lee Dae-jun, a 47-year-old fisheries official who was fatally shot by North Korea in 2020, has asked for the Democratic Party of Korea’s support in the disclosure of records from the Moon Jae-in administration.

Among the information the family is seeking are what was briefed to Cheong Wa Dae by the intelligence and armed services in the time between the capture and killing of Lee on Sept. 22, 2020, as well as the orders given by Cheong Wa Dae.

The family has also asked for the minutes from the first National Security Council meeting after Lee was confirmed dead, and whether there are government documents to back Moon’s statement at the time that there had been no communication channels between North and South.

The family met with the Democratic Party leadership on Monday morning to ask for help in releasing the records.

“The Democratic Party lawmakers have been saying that there is no evidence that it wasn’t a defection,” Lee Rae-jin, the deceased’s older brother, told The Korea Herald. “Then the party should commit to unveiling the information that is now being withheld and allow the family access to the truth.”

After Monday’s meeting Rep. Woo Sang-ho, the Democratic Party’s interim leader, said to reporters, “I understand that it might be hard to accept a family member had defected to North Korea.”

Over the weekend, the Democratic Party launched a task force with the aim of responding to the ruling party’s “politicizations and distortion of facts” regarding the Moon administration’s handling of Lee’s case.

The ball is now in the Democratic Party’s court to decide whether to release the information locked away as a part of Moon’s presidential records, says Kim Ki-yun, a lawyer working with Lee’s family.

One of only two ways to unlock presidential records is the approval of two-thirds of the National Assembly, whose majority is currently controlled by the Democratic Party.

“The other way is to get the high court to issue a warrant, which could entail taking legal action against the last president,” Kim told The Korea Herald.

The timeline of South Korea’s first response to Lee’s killing is as follows.

Lee, who was conducting a patrol near an inter-Korean sea border off the west coast on a fisheries boat, was first reported missing just after noon on Sept. 21, 2020.

It was 3:30 p.m. on Sept. 22 that South Korea learned Lee was found by a North Korean patrol boat in North Korean waters amid search efforts by maritime and naval authorities. About three hours later at 6:36 p.m., Moon received a written briefing on the missing official’s capture by North Korea. Then at 10:30 p.m., South Korean intelligence discovered North Korea had shot him and burned his body.

Suh Hoon, then director of national security, presided over a National Security Council meeting for about an hour and a half until 2:30 a.m. on Sept. 23 at Cheong Wa Dae. The meeting took place as Moon made a pretaped video address at the 76th session of the United Nations General Assembly in which he called for a declaration to end the Korean War.

Later that morning at 8:30 a.m., Moon was briefed in person about the intelligence on the killing. At noon the next day on Sept. 24, a second National Security Council meeting was convened -- again in the absence of the president. Moon instead attended an a capella performance at a digital cultural content event.