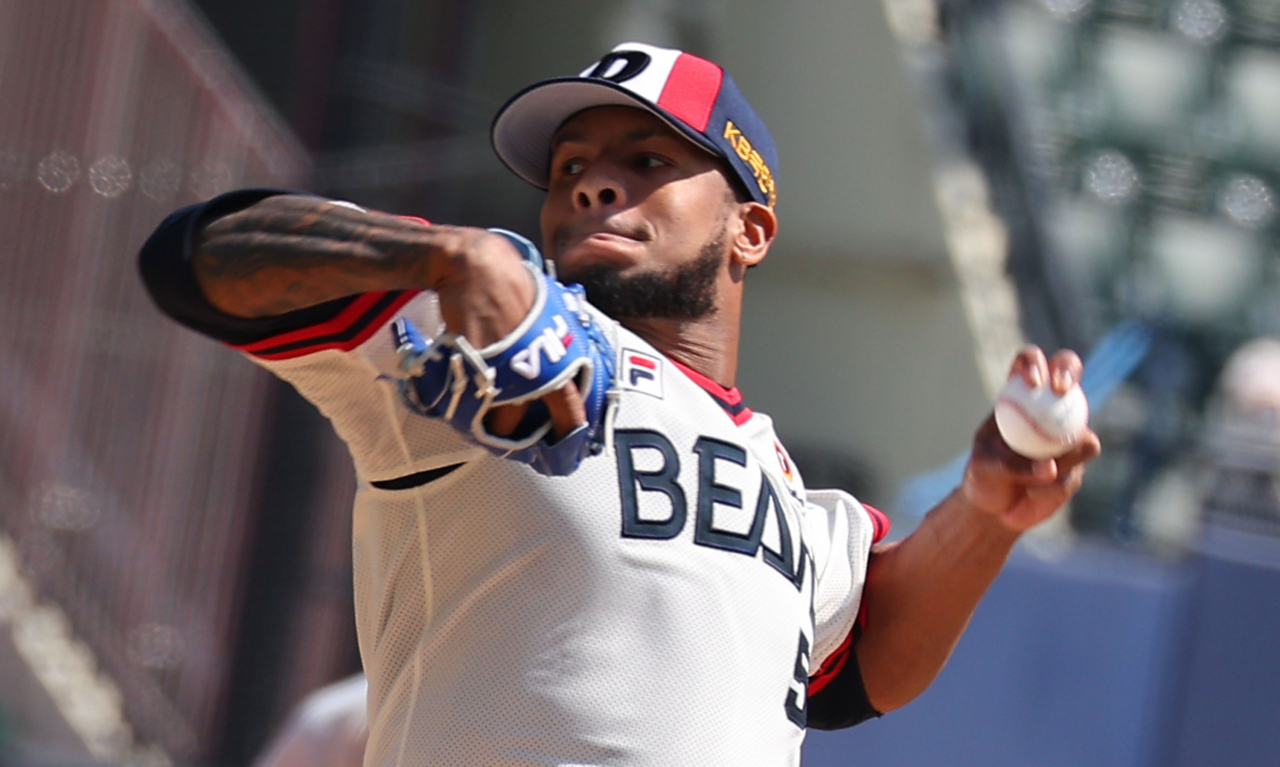 In this April 17, 2022, file photo, Ariel Miranda of the Doosan Bears pitches against the Kiwoom Heroes during a Korea Baseball Organization regular season game at Jamsil Baseball Stadium in Seoul. (Yonhap)

Nearing the halfway point in the 2022 South Korean baseball season, the Doosan Bears still find themselves out of the postseason picture. They snapped a three-game slide on Sunday but remained in seventh place in the Korea Baseball Organization (KBO) at 32-37-1 (wins-losses-ties), 1.5 games out of the fifth and final playoff spot.

The Bears have played in each of the past seven Korean Series, and that record-setting streak will end this year without the Bears even reaching the postseason unless they can piece together some wins over their final 74 games.

As important as their 8-4 victory over the Kia Tigers on Sunday was, perhaps a more crucial development for the Bears' immediate future happened before the game, when their manager Kim Tae-hyoung said the team was ready to cut bait on left-hander Ariel Miranda, the 2021 league MVP.

Miranda has been hampered by shoulder issues all season. He returned to the mound against the Tigers on Saturday after missing two months, but likely pitched himself out of the KBO with a disastrous showing.

Miranda lasted just 2/3 of an inning while allowing four runs on six walks and one hit-by-pitch. He did not give up a hit but set a KBO record for most combined walks and hit-by-pitches in one inning with seven. He was taken off the Bears' active roster on Sunday.

Miranda was limited to just two starts in April, pitching a combined seven innings, before hitting the sidelines with a shoulder injury. And after Saturday's wild outing, Kim had seen enough.

"I am not convinced that Miranda will get better," Kim said Sunday. "If he wants to work out in the minors, he can do that. And we'll have to prepare to go our own way (without Miranda). We'll have to lean toward replacing him."

This is a shocking fall from grace for the Cuban left-hander, who set a new KBO single-season record with 225 strikeouts last season en route to winning the regular season MVP honor.

"I understand a few other clubs are looking to replace their foreign pitchers," Kim added. "We've been compiling a list of pitchers we'd like to acquire."

Miranda is one of seven foreign players to have won a regular season MVP in the KBO. Once the Bears decide to cut ties with him, Miranda will become the first among those seven to be released in the middle of a season immediately after their MVP campaign.

"Miranda has been trying to do his best, even when his body was failing him," Kim said. "But we've waited long enough for him to come around."

The Bears will open the new week with a three-game road series against the Lotte Giants, currently one game back of the Bears in eighth place. Then it's another road trip for the Bears, as they take on the KT Wiz for the weekend.

While teams in the bottom half of the standings jostle for position, the top four teams -- SSG Landers, Kiwoom Heroes, LG Twins and Kia Tigers -- have stayed in that order since June 4.

The Tigers have a crucial week coming up against the top two teams. They will visit the Heroes at Gocheok Sky Dome in Seoul from Tuesday to Thursday. They will then travel west to Incheon for three games against the Landers starting Friday. (Yonhap)