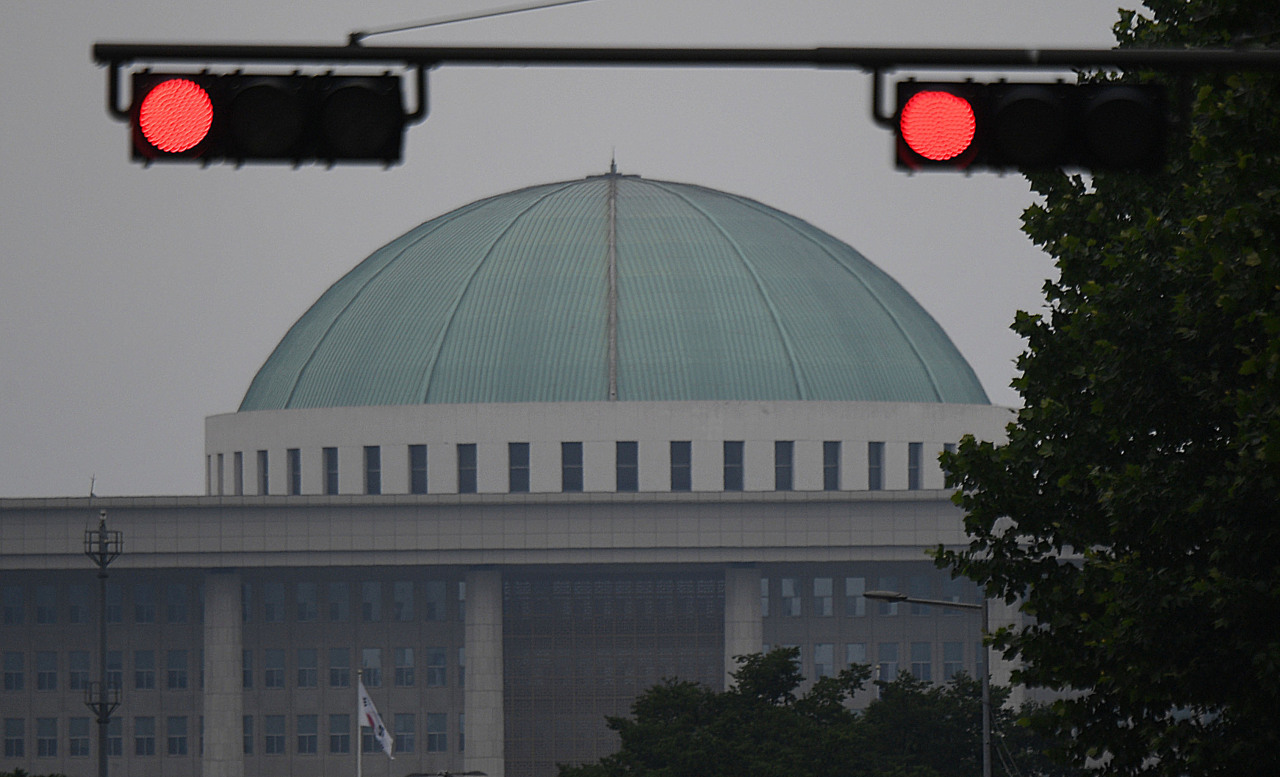 View of the National Assembly in Yeouido, western Seoul, on Sunday (Joint Press Corps)
South Korea could observe the first Constitution Day next month without a National Assembly speaker in 24 years, as the legislative branch remains stalled from rival parties failing to reach agreement on who should take key legislative posts.

The main opposition Democratic Party of Korea on Sunday criticized the ruling People Power Party for rejecting its offer to let the People Power Party take the chair seat of the Legislation and Judiciary Committee instead of having the ruling party participate in the special legislative committee made to carry out prosecution reform measures.

The offer was made after more than 60 percent of Democratic Party’s legislators agreed to the move during a two-day workshop the party ran until Saturday. The People Power Party expressed its intent to refuse the offer less than an hour after receiving it, according to the Democratic Party.

“I have been in politics for around 22 years, and I have been a floor leader in the past as well,” Rep. Woo Sang-ho, chair of the Democratic Party’s emergency steering committee, told reporters Sunday, “It is the first time I saw an offer refused without any suggestions for edits. I am dumbfounded to be honest.”

The People Power Party said it refused the offer because it cannot join the special committee for prosecution reform as suggested by the main opposition party. The party is clearly against any moves limiting the authority of the prosecution, and it would be nonsensical to join a committee directly supporting further measures to strip powers from the prosecution, it says.

“The case was submitted for a competence dispute with the Constitutional Court, so how can we possibly take part in the special committee?” Rep. Kweon Seong-dong said in a meeting Sunday. “The Democratic Party is making unreasonable demands.”

The party instead suggested the National Assembly hold a plenary session to elect a new speaker and name a ruling party legislator to head the judiciary committee, as the two parties promised last year. Carrying out the bipartisan compromise is a means to keeping the promise made with the people, the party claims.

“The Democratic Party is trying to unreasonably include the evil prosecution reform bill in the negotiation,” Kweon said in a party meeting Monday. “We cannot agree to any condition of forming the special committee on prosecution reform and canceling the complaint filed with the Constitutional Court.”

If negotiations fail to yield progress, South Korea could celebrate this year’s Constitution Day without a National Assembly speaker. Whoever led the legislative branch usually gave an official address for the ceremony observing the proclamation of South Korea’s Constitution on July 17, 1948.

The last time the country observed Constitution Day without a National Assembly speaker was in 1998 during the 15th National Assembly when the rival parties failed to reach a compromise on Cabinet appointments shortly after the launch of the Kim Dae-jung administration.

Former National Assembly Speaker Kim Soo-han, whose term as the National Assembly speaker ended a month earlier, gave an address instead for the ceremony that year. His successor, Park Jyun-kyu, was appointed in August 1998.

Chances are growing for the key legislative posts to remain vacant through this year’s Constitution Day on July 17, as Kweon, who would be in charge of negotiations on behalf of the ruling party, will be away from the table this week, starting Tuesday.

He is slated to go on a four-day trip to the Philippines as South Korea’s special envoy for the inauguration ceremony of the Philippines’ new president.