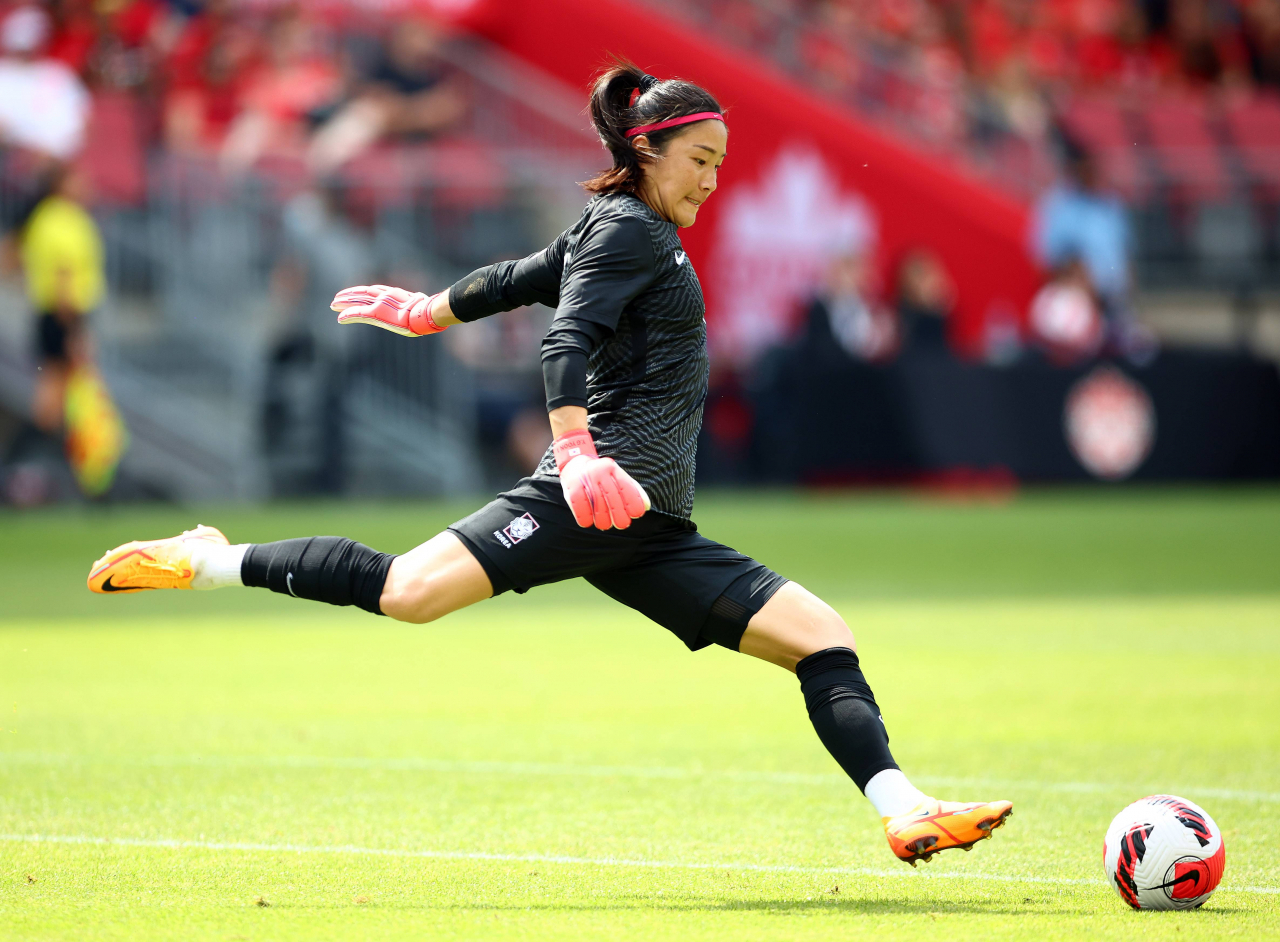 In this Getty Images photo, Yoon Younggeul of South Korea kicks the ball against Canada during the teams' football friendly match at BMO Field in Toronto on Sunday. (Getty Images)

South Korea have collected a well-earned 0-0 draw against Olympic champions Canada in a women's football friendly match, their latest prep for an upcoming regional tournament and then the World Cup in 2023.

Despite being outshot 13-3, world No. 18 South Korea held the sixth-ranked Canada without a goal at BMO Field in Toronto on Sunday (local time).

Canada started attacking from early on, with Jordyn Huitema's header sailing just wide of the target on four minutes.

In the 17th minute, Janine Beckie set up Kadeisha Buchanan's header that bounced off goalkeeper Yoon Younggeul and landed on the top of the net. It was Canada's only shot on net in the opening half.

South Korea did not put a shot on target in the first half, though Ji So-yun saw her attempt from just outside the box go left of the goal just before the half-hour mark.

Ji had South Korea's first shot on net five minutes into the second half, though it was easily stopped by Canadian goalkeeper Kailen Sheridan.

Canada made one final push during injury time, with three consecutive shots toward the target following a corner. But Yoon stopped shots by Buchanan and Vanessa Gilles, while Deanne Rose's chance was also blocked.

"We played some really good football. It wasn't as though we just laid low and hung on for dear life," South Korea head coach Colin Bell said afterward. "We just need an element of concentration in the final third, and that comes with a higher fitness level. So there's a lot to learn."

Bell in particular praised his players' discipline and organization.

"I think we definitely deserved to get at least a draw," he said. "We limited Canada to almost zero chances. The players gave everything, and (our) tactical discipline was really, really good."

South Korea are gearing up for the East Asian Football Federation E-1 Championship next month in Japan, where they will take on the host country, China and Chinese Taipei. As important as that tournament is, Bell was looking at a bigger picture.

"The E-1 Championship is very important because it's our next fixtures. We have some really tough matches to play. We can work again on our game and our general fitness and our tactical flexibility," Bell said. "But all of these games are preparation for the World Cup. That's the most important thing." (Yonhap)