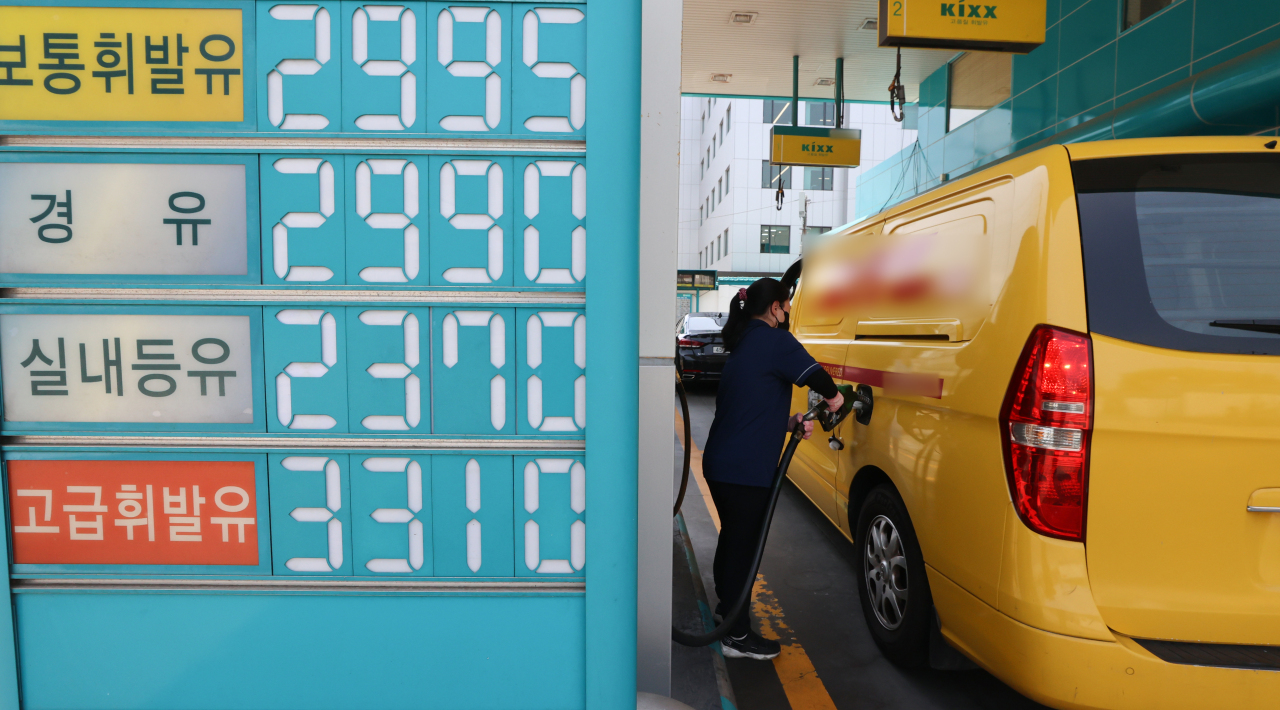 A signboard at a gas station in Seoul shows a spike in prices of gasoline and diesel. While the nationwide barometer climbed to 2,126.21 won ($1.63) and 2,142.18 won per liter, respectively, prices of the products in some districts of the capital approached 3,000 won as of Tuesday. (Yonhap)
SEJONG -- Economic policymakers on Friday said they would ramp up pressure on gas stations in a bid to ease inflationary pressure from surging energy costs, as soon as an expanded fuel tax cut goes into effect next week.

The government announced last week that it would further increase tax cuts on fuel consumption from the current 30 percent to 37 percent, the maximum legal cap.

“In consultation with the oil refinery industry, (the government) plans to induce a cut in supply prices for gas stations and retail prices at gas stations as soon as the policy takes effect (on July 1),” Vice Minister of Economy and Finance Bang Ki-sun said during a vice ministerial meeting in Seoul.

“In addition, the Energy Ministry and the Fair Trade Commission will look into the market in a bid to uncover any possible cartels like price-fixing among refiners,” he said.

Despite the spiraling prices, the nation’s consumption of gasoline and diesel products have increased sharply recently, according to the KNOC.

In May, the consumption of gasoline and diesel came to 24.82 million barrels, up 43 percent compared to a month earlier.

An insider in the local refinery industry attributed the rebound to a bigger fuel tax cut of 30 percent, starting from May. A 20 percent cut was implemented between November 2021 and April 2022.

Meanwhile, some insiders have predicted that the nation’s oil prices would stabilize in the coming weeks, citing a gradual decline in international crude prices.

But others said international crude prices could see another spike in accordance with the coming developments of the prolonged war between Ukraine and Russia and the speed in economic normalization of major economies, including China, from the pandemic.