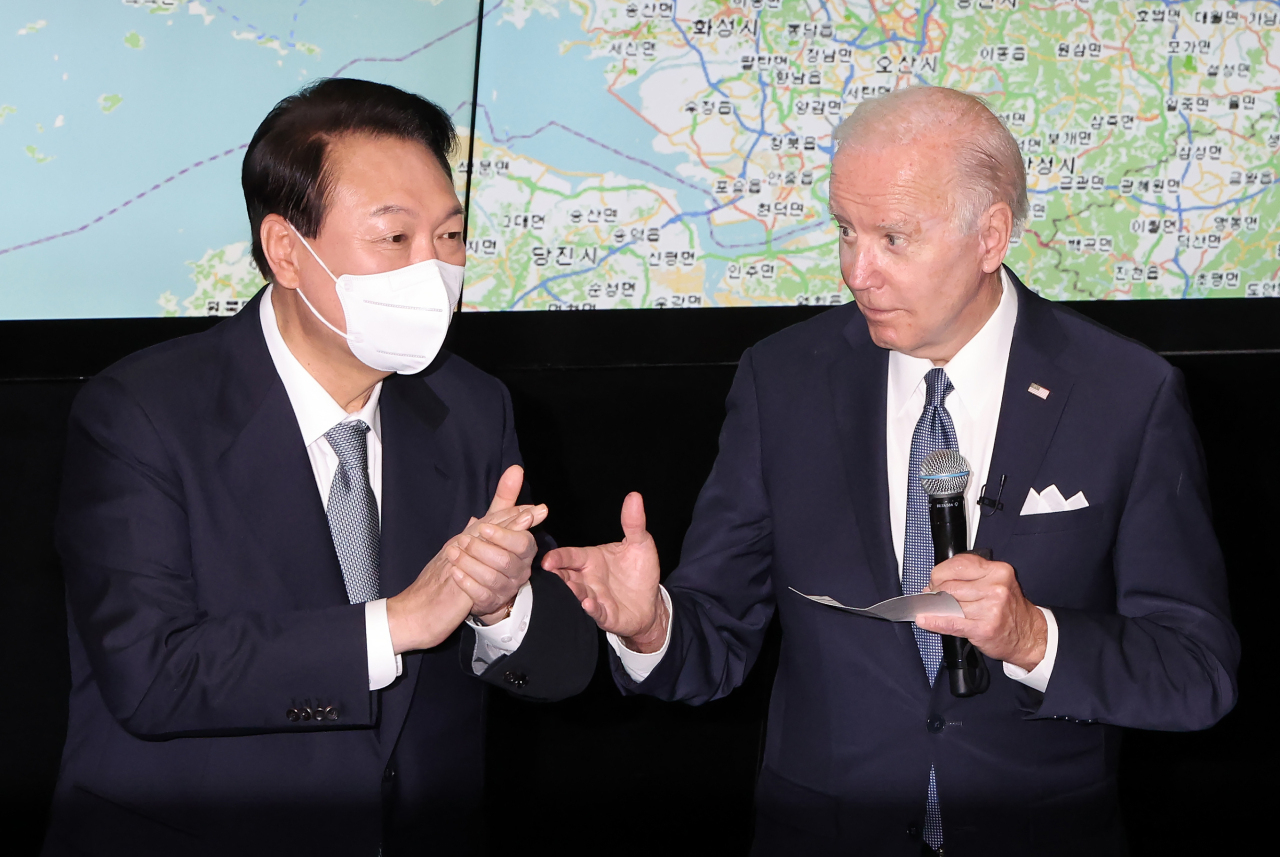 President Yoon Suk-yeol (left) and President Joe Biden at the Korean Air and Space Operations Center at the US Air Force Base in Osan on May 22. (Yonhap)

The US House Armed Services Committee has endorsed an annual defense policy bill for the fiscal year 2023 maintaining the current level of around 28,500 American troops in South Korea, according to media reports Friday.

The proposed National Defense Authorization Act (NDAA) for the fiscal year starting Oct. 1 also directs the defense secretary to brief the committee no later than March 1 next year on how the Pentagon will continue to strengthen its long-term security commitment to South Korea.

The NDAA bill, which is now heading to a floor vote, comes as the South and the United States are striving to sharpen deterrence against North Korea's military threats amid concerns of the regime conducting a nuclear test.

Posted on the committee website, the bill stated it is the "sense of the Congress" that the US troop presence in the South serves as a "strong deterrent" against North Korean aggression and a "critical" support platform for national security engagements in the Indo-Pacific region.

The bill also mentioned that the presence of the approximately 28,500 members of the US Forces Korea serves "not only as a stabilizing force to the Korean Peninsula but also as a reassurance to all our allies in the region."

"The United States should continue to ... maintain its existing robust military presence in South Korea to deter aggression against the United States and its allies and partners," the bill's text reads.

A new addition to the annual bill is the call for the Pentagon chief to provide a briefing on Washington's efforts to reinforce its security commitment to South Korea.

The briefing should include the scope and scale of combined military exercises and training on and around the peninsula, as well as efforts to enhance security measures and identify new steps to reinforce deterrence against the North's "destabilizing" activities, according to the text.

In addition, the briefing should include efforts to counter threats to South Korea's security by Russia and China.

The Senate Arms Services Committee has also advanced a similar defense policy measure for the fiscal year 2023, according to reports. (Yonhap)