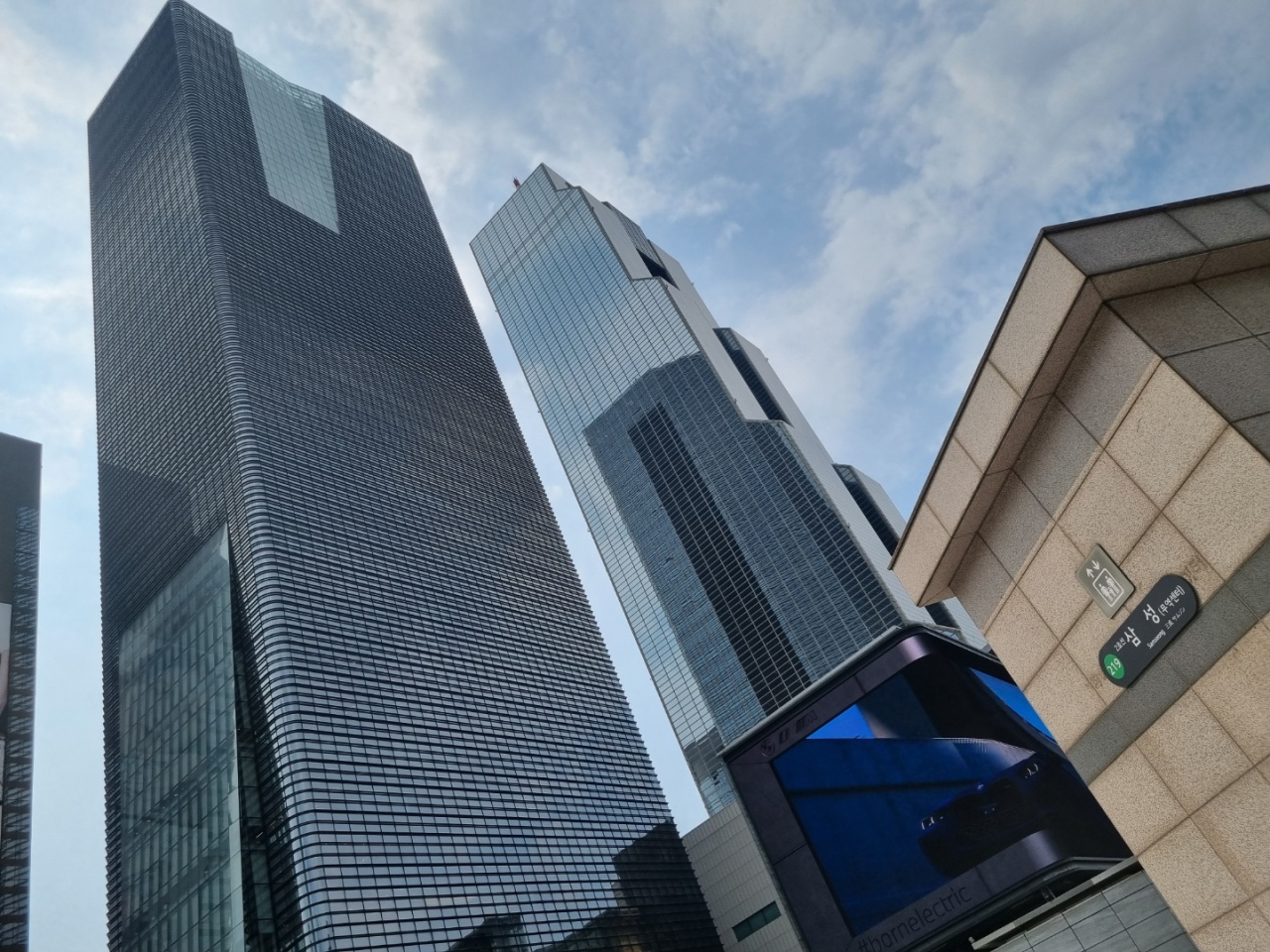 A view of Coex Artium (Park Han-na / The Korea Herald)
In Korean, Samseong Station on Line No. 2 is written and pronounced exactly the same as Samsung, the country’s No. 1 conglomerate by any measure. Even some locals presume the two to be related, given the firm’s nearly ubiquitous presence in South Korea.

Rather, it is the another Korean corporate behemoth -- Hyundai Motor Group -- that is linked to it.

In 2014, the auto group bid a jaw-dropping 10.5 trillion won ($8.04 billion) to buy a plot of land near the station to build its headquarters there. That was more than double what Samsung, which also participated in the auction, had offered.

Standing at the intersection of the 14-lane wide Yeongdong-daero and Teheran-ro, Samseong Station serves as a hub of international business, IT, shopping, conventions, exhibitions or anything and everything glitzy and glamorous. 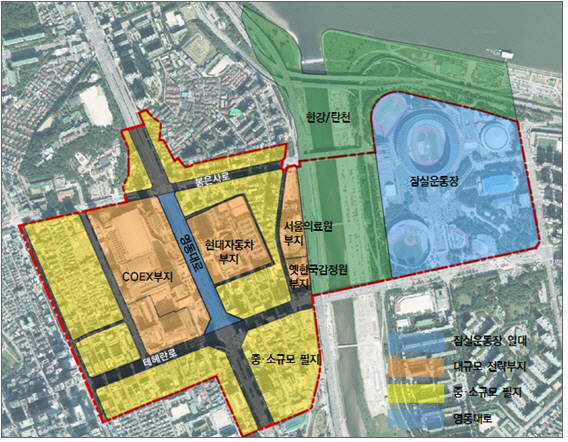 A view of Yeongdongdaero, located between Coex Artium (left) and Shilla Stay Samsung, in Samseong-dong of Gangnam, Seoul (Gangnam-gu Office)
“The yolk of Seoul” is how locals describe the area, in reference to its ultrahigh land prices and its ample future potential.

Let’s begin with the origin of the name, Samseong.

In 1914, during the Japanese colonial period, three villages were consolidated into one administrative district and named Samseong, which literally means the merging of three.

One of the districts was of Bongeunsa, a Buddhist temple that stands just a 10-minute walk from Samseong Station.

Some people find it strange that a temple sits in such an expensive neighborhood, but Bongeunsa was built in a secluded place, like other temples hidden deep in the mountains of Korea. It’s just that the surrounding landscape has changed dramatically.

Up until the early 1970s, even as the miracle of Han River began to unfold, where Samseong Station now stands remained muddy land, with thatched houses sparsely scattered across vast fields.

Soon, a wave of urbanization was set off by the authoritarian regime led by strongman Park Chung-hee in his drive to develop the area south of the Han River. Bridges were built, roads paved and apartment buildings erected at a dizzying pace, under a plan to develop 12 million square meters of land into an urban residential and business district. 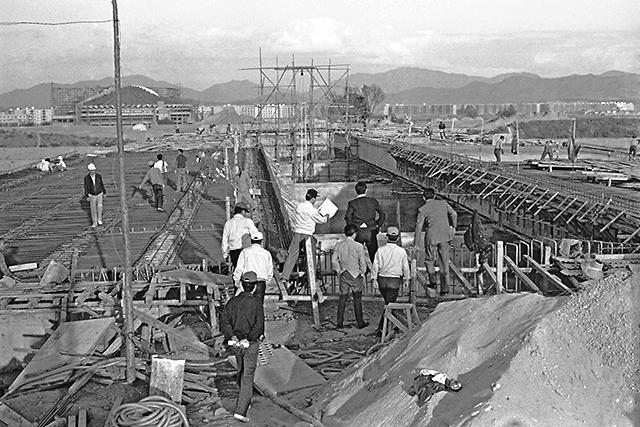 People look at the construction site of the Samseonggyo, a 260-meter bridge completed in 1975, connecting Samseong-dong in Gangnam and Jamsil-dong in Songpa-gu. (Gangnam-gu Office)
Originally the Park government planned to relocate the Ministry of Commerce and Industry and all of its affiliated agencies there, but settled with moving the headquarters of the Korea International Trade Association and Korea Electric Power Corp.

Samseong set for another leap

Today, Samseong Station is best known for Coex, the international convention and exhibition center and its massive underground shopping mall. The two are both directly connected to the station and affiliated with the aforementioned trade association.

According to Seoul’s official tourism site visitseoul.net, Starfield Coex ranked as the second most searched destination in Seoul on the site, based on search results in 2020. The mall, the largest underground shopping mall in Asia, was rebranded as Starfield Coex after local retail group Shinsegae became its sole operator in 2016.

Starfield Library, a two-story library with more than 50,000 books at the center of the mall, was No. 3 on the list. 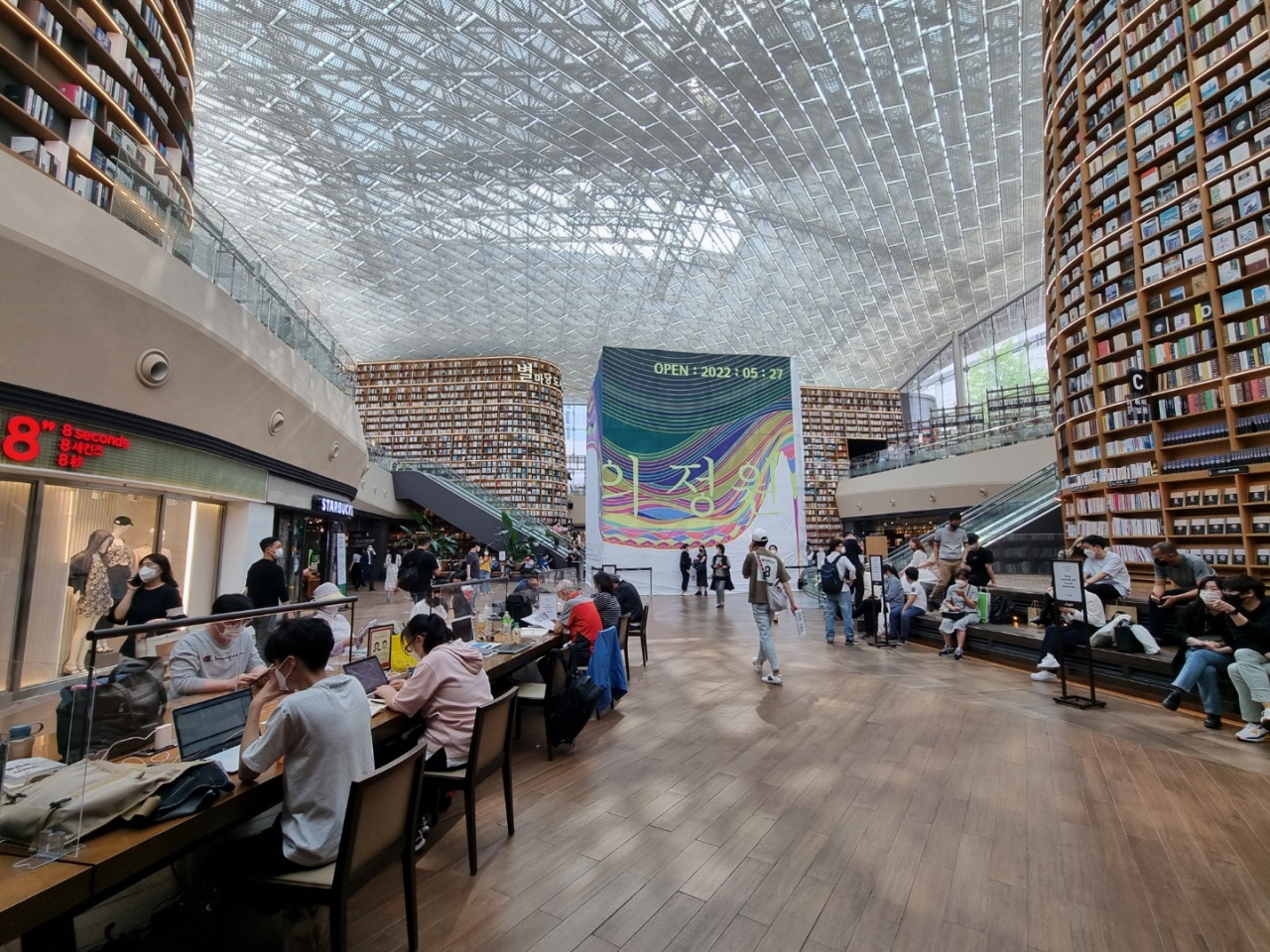 A view of Starfield Library, located in the center of Coex Mall (Park Han-na / The Korea Herald)
“It reminds me of a big shopping mall in California. I found Starfield Library via Instagram and thought it would be fun to visit this place,” said Jackie Rodriguez, 23, from Texas, adding that she has long been interested in Korean culture.

Stepping out of the station, what first catches the eyes is the massive digital billboard atop the Coex Artium building. In 2020, local firm D’strict’s public art project Wave grabbed global attention when it was revealed on the gigantic curved screen there as the world’s largest anamorphic illusion.

Walking along, one notices that the area is visually divided into two axes: One side is lined up with towers and shopping malls, while the other features an empty gigantic plot with ongoing construction.

This is where Hyundai Motor Group comes in.

In the plot of 79,432 square meters, the conglomerate is building its headquarters and an automotive theme park like Volkswagen’s Autostadt in Germany.

The 2014 land deal’s hefty price surprised many and angered some investors. But Hyundai Motor Group Chairman Chung Euisun claimed it was a worthy investment, given “the future value” of the area.

The plot was originally part of Bongeunsa’s property. Amidst the whirlwind of changes and developments, its ownership was transferred to the state and it came to be the home of the state-run Korea Electric Power Corp.

The completion of the Hyundai complex, slated for December 2026, which will house 15 Hyundai affiliates and 10,000 employees, is widely expected to change the landscape of the neighborhood. The original plan was to build a 105-story skyscraper, which would be the country’s tallest, but it appears the group has been making major modifications. It is said the conglomerate will build two or three buildings of some 50 floors above ground.

Aside from the Hyundai Motor headquarters, the Seoul Metropolitan Government has its own plan to build an international exchange complex in the area that will encompass exhibitions and conventions, sports and culture and entertainment facilities.

The complex will cover 1.9 million square meters between Coex and the Jamsil Sports Complex, including areas vacated by Kepco and other public organizations.