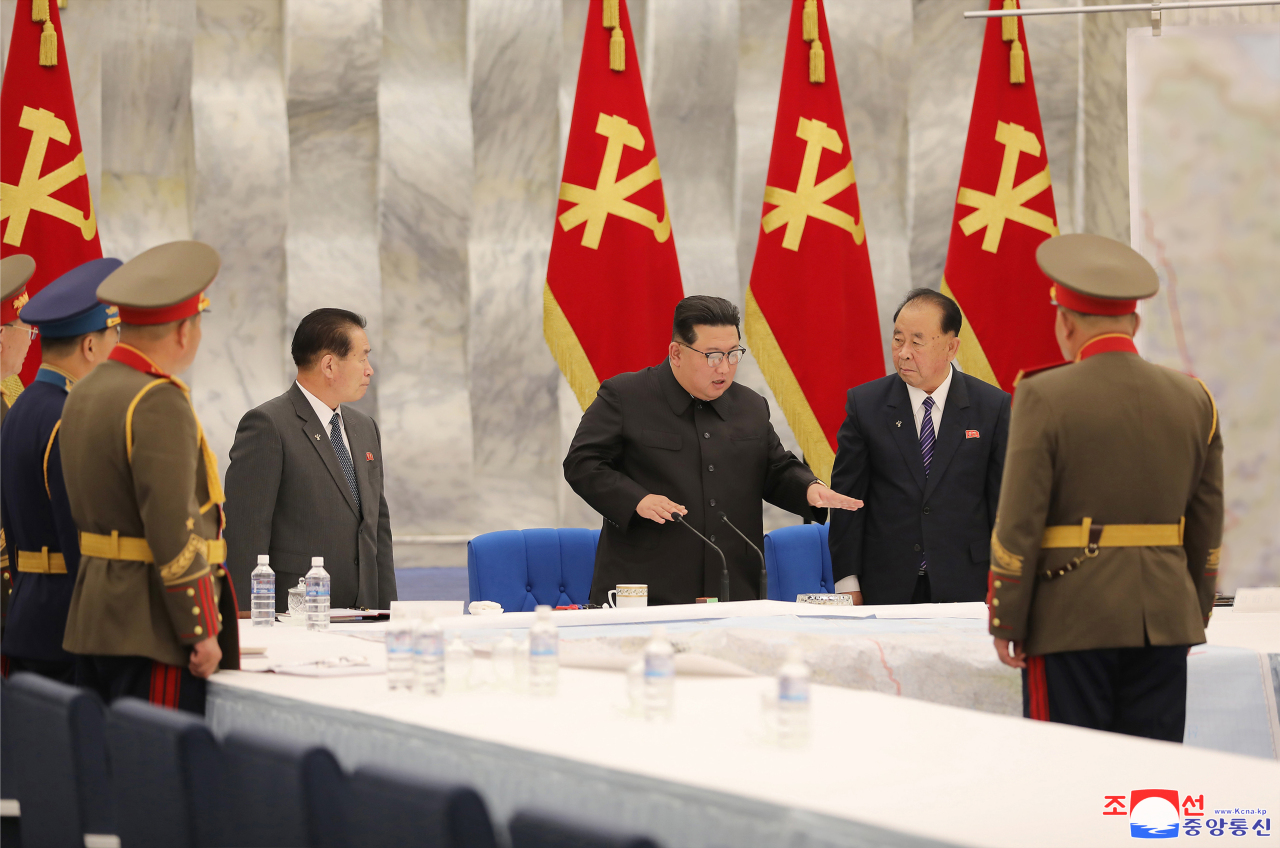 North Korean leader Kim Jong-un (center) speaks during a meeting of the central military commission of the Workers` Party in Pyongyang on its second day on Wednesday in this photo provided by the state-run Korean Central News Agency. (Yonhap)
The North Korean military on Wednesday discussed how to revise an operational plan and missions of front-line units at a key meeting, which experts view as preparations that would allow tactical nuclear weapons to be deployed along the inter-Korean border.

“At the meeting, the additional operational missions of front-line units of the Korean People’s Army were confirmed and the issue of revising an operational plan was discussed in accordance with the party’s military and strategic plans,” the KCNA said in a Korean-language report.

The restructuring of key military organizations was also discussed during the third enlarged meeting of the eighth Central Military Commission, which was held for the first time in about a year. The first and second meetings were held respectively in February and June 2021.

“Dear respected comrade, Kim Jong-un emphasized the importance of this work and clarified all the principles, tasks and ways to implement it while expressing the strategic view and determination of the Party Central Committee which has taken crucial military measures to enhance the operational capabilities of the front-line units,” KCNA said.

Move to operate newly developed weapons
Yang Uk, an associate research fellow at the Asan Institute for Policy Studies think tank, pointed out that the North Korean military would see the need to revise an operational plan and restructure military organizations in light of the development and deployment of tactical nuclear delivery vehicles, including KN-23, KN-24, KN-25 short-range ballistic missiles and “new-type tactical guided weapons.”

The set of three dual-capable missiles that North Korea first flight-tested in 2019 and launcher platforms have been presumed to be in the hands of the KPA Strategic Force, Yang said. But North Korea does not currently possess tactical nuclear warheads which require the country to conduct additional nuclear tests.

“Should North Korea begin to operate tactical nuclear delivery vehicles which have been either developed or deployed, it would end up changing the mission of front-line units, an operational plan and military organizations,” Yang told The Korea Herald. “So, North Korea appears to be gearing up for the upcoming changes.”

North Korea expressed its intent to deploy tactical nuclear weapons along the inter-Korean border in April, when Kim Jong-un observed the test-firing of a new-type tactical guided weapon system.

At that time, the North Korean state media said the tactical guided weapon system was of “great significance in drastically improving the firepower of the front-line long-range artillery units and enhancing the efficiency in the operation of tactical nukes of the DPRK and diversification of their firepower missions.”

“In light of this, North Korea’s move aims to reflect the changes in the operational missions of front-line units that would stem from the deployment of short-range delivery vehicles capable of carrying tactical nuclear weapons to front-line areas,” Hong told The Korea Herald.

“The main responsibility of front-line units was to operate conventional weapons such as artillery, but their mission could be expanded into handling tactical nuclear weapons. And the changes would be integrated into the military reorganization.”

But Yang has reservations about whether the tactical nuclear delivery vehicles — which belong to the KPA Strategic Force — will be handed over to front-line infantry.

“Notwithstanding, corps employing tactical nuclear weapons under the Strategic Force should carry out military operations in coordination with front-line units. In this sense, there is a fair chance that the corps will be deployed within the front-line units’ area of responsibility.” 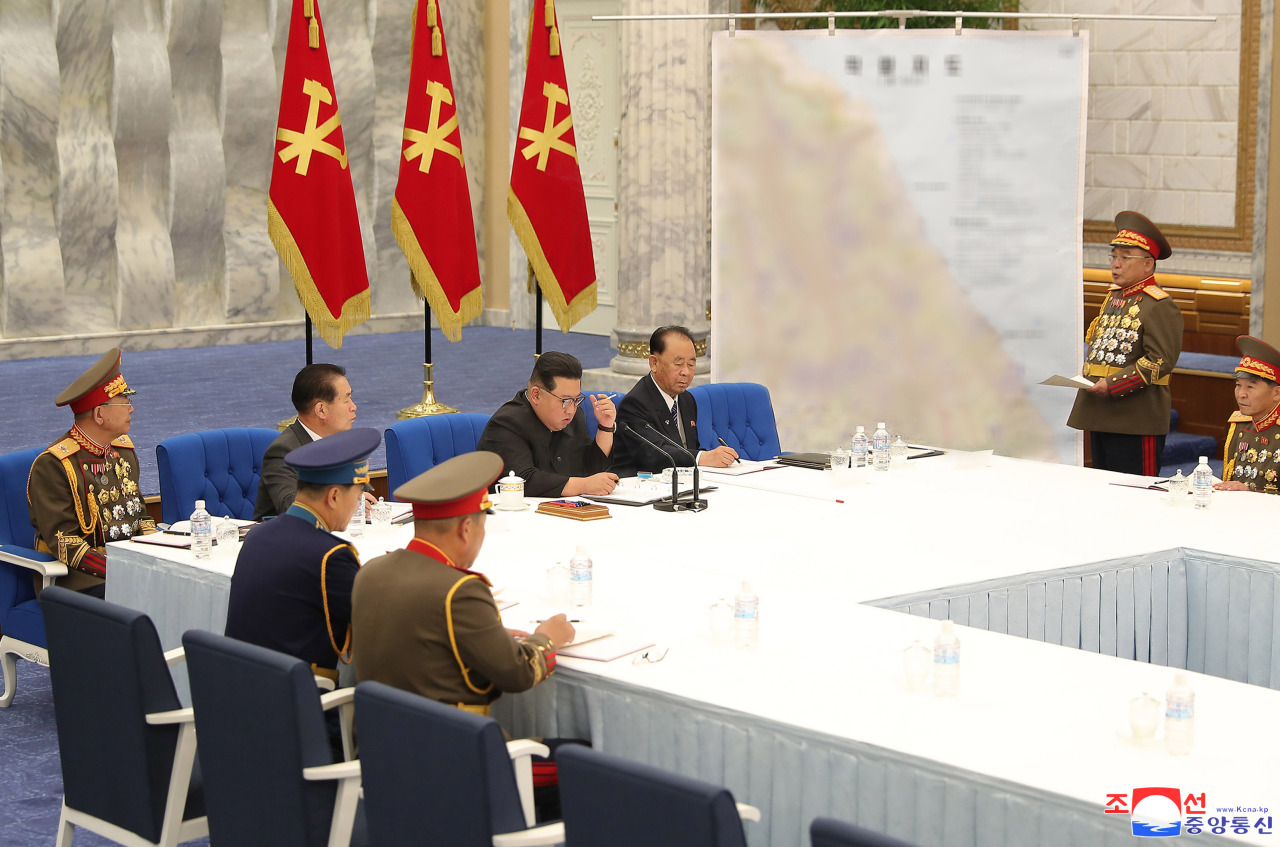 Chief of the General Staff of the Korean People`s Army, Ri Thae-sop, gives a briefing to the North Korean leader standing in front of a map of the eastern coast of South Korea. The blurred map shows the area from North Korea’s Wonsan to South Korea’s Pohang in this photo provided by the state-run Korean Central News Agency. (Yonhap)
Message to S. Korea, US
Hong took note that North Korea sought to “intentionally disclose” the revision of an operational plan and military reorganization in an attempt to send an external message mainly to South Korea and the United States.

“This seems to be the counteraction to the recent moves by South Korea and the United States to reinforce the US extended deterrence and step up combined military exercise,” Hong said.

“North Korea seeks to show that it has capabilities and military forces to respond to the moves and suppress (the two countries) by disclosing its plans to deploy tactical nuclear weapons to front-line areas.”

South Korea’s Ministry of Unification said Thursday that “there are high chances that North Korea will ratchet up the military threat to South Korea” in light of the state media report.

The North Korean state media also released a photo of the chief of the KPA General Staff Ri Thae-sop giving a briefing to the North Korean leader standing in front of a map of the eastern coast of South Korea. The blurred map shows the area from North Korea’s Wonsan to South Korea’s Pohang.

Hong said the photo suggests that North Korea has plans to deploy tactical nuclear weapon delivery vehicles to strike South Korean and US military bases and their key facilities in the region.

North Korea also appears to seek to increase its Access/Access Denial (A2/AD) capabilities in the eastern coast where US strategic assets such as nuclear-powered aircraft carriers are generally deployed.

Decision on nuclear test?
A total of 17 meetings of the Central Military Commission -- 16 enlarged meetings and one preliminary meeting -- have taken place since Kim took power in December 2011.

But it is the first time North Korea holds a multiday defense meeting at a critical juncture when South Korea and the United States have said North Korea could conduct a nuclear test at any time at the Punggye-ri nuclear testing site.

Yang Moo-jin, a professor at the University of North Korean Studies, said North Korea could decide on a nuclear test during the multiday meeting that Kim is expected to continue to attend.

“If North Korea has determined to conduct a nuclear test, it will carry it out immediately after chairman Kim Jong-un issues an order and informs China and Russia of the plan,” Yang told The Korea Herald.

“On the other hand, North Korea will keep it off the record if it decides to put a nuclear test on hold. It is highly likely to opt to postpone a test in view of the monsoon, China’s opposition and a need to focus on improving people’s livelihood.”

Yang said North Korea could also stand to benefit by putting the plan on ice as the country can receive large-scale assistance from China and buy time, without provoking the South Korea-US alliance to reinforce the US extended deterrence and their combined defense posture.