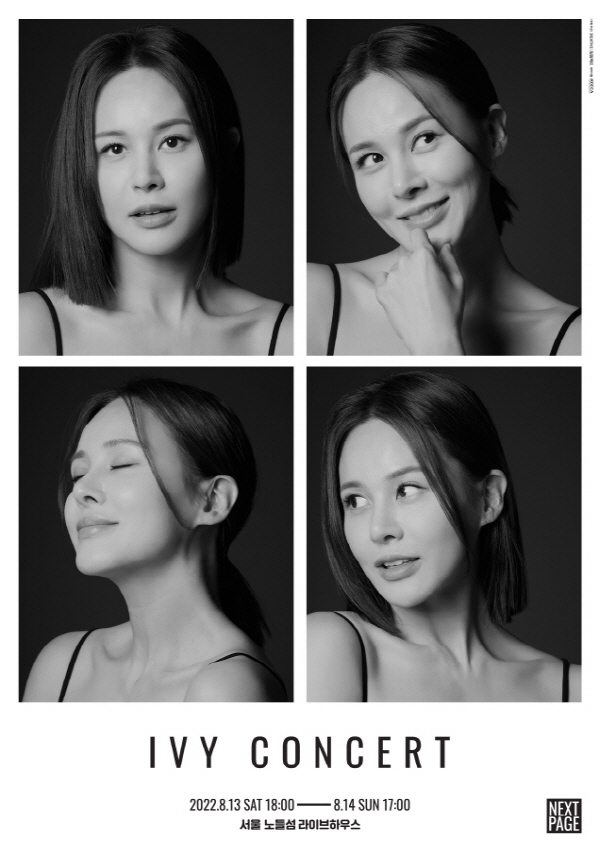 Poster image of Ivy’s concert “Next Page” (Creative i)
Singer-turned-actor Ivy will hold a solo concert for the first time in 15 years in August, her management agency, Creative i, said on Thursday.

The upcoming concert, titled “Next Page,” will take place at Nodeul Live House on Nodeul Island, central Seoul, on Aug. 13-14, the agency said in a statement.

“Ivy will deliver a heartfelt performance on stage with her beloved fans for the first time in a long while,” the statement read. “She is preparing a variety of songs from different genres; from ballad to dance to musical numbers.”

The performer made a wildly successful debut in 2005 with her first album, “My Sweet and Free Day.” Her hit songs include “Sonata of Temptation” and “If You‘re Gonna Be Like This,” featured in her second full-length album, “A Sweet Moment,” released in 2007.

She held her last solo concert, “Ivy Present 01st,” in June 2007. Since making her debut as a musical actor in “Kiss Me, Kate” in 2010, Ivy has been in big-name musicals, including “Chicago,” “Ghost,” “Wicked” and “Jekyll & Hyde.” She is currently starring in the musical “Aida” as Amneris.

Tickets for “Next Page” are available on Interpark and Yes24 from Thursday at 8 p.m.