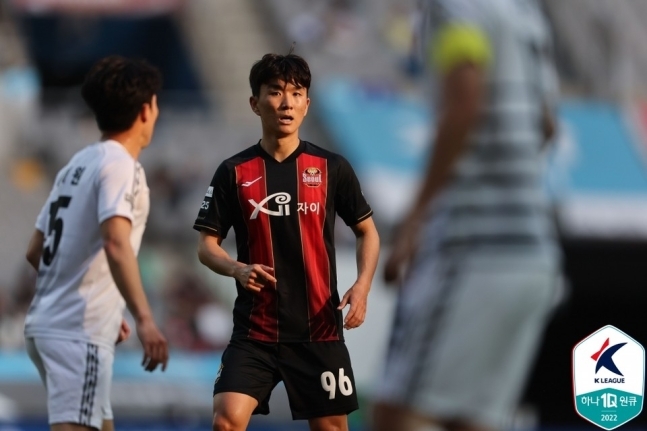 Hwang, a go-to midfielder for the South Korean national team, signed a short-term deal with FC Seoul in the K League 1 in April.

He had been playing for the top-division Russian club Rubin Kazan since 2020, but he faced an uncertain future with the team following Russia‘s invasion of Ukraine in February and subsequent sanctions against Moscow.

FIFA temporarily allowed foreign players based in Russia to unilaterally suspend their contracts and play elsewhere. Hwang then decided to continue his career in his native land.

That initial contract was set to expire on June 30. But on Tuesday, FIFA announced it would extend the employment rules until June 30, 2023. This means Hwang can either stay with FC Seoul for another year or he can find a new home.

Hwang, who made his FC Seoul debut on May 5, had played in seven matches for the team, prior to Wednesday’s game against Ulsan Hyundai FC. He has already made a strong impression on the club, to a point that head coach An Ik-soo quipped Wednesday that he‘d buy toy handcuffs to make sure Hwang wouldn’t go anywhere.

“We absolutely love having him on our team,” An told reporters.

“I hope to have an opportunity to keep writing memorable stories with him. And I understand our supporters feel the same way. He means so much to South Korean football and fans.”

Hwang has reportedly drawn interest from teams in France and Germany. The 25-year-old is a versatile playmaker who combines offensive instincts with defensive chops. He has emerged as a regular midfielder on Paulo Bento’s watch for the senior national team.

At the under-23 level, Hwang was a member of South Korea’s gold medal-winning squad at the 2018 Asian Games.

Hwang made his club debut with Daejeon Hana Citizen in the K League 1 in 2015. He later spent two seasons with Vancouver Whitecaps in Major League Soccer before taking his talent to Russia in August 2020. (Yonhap)