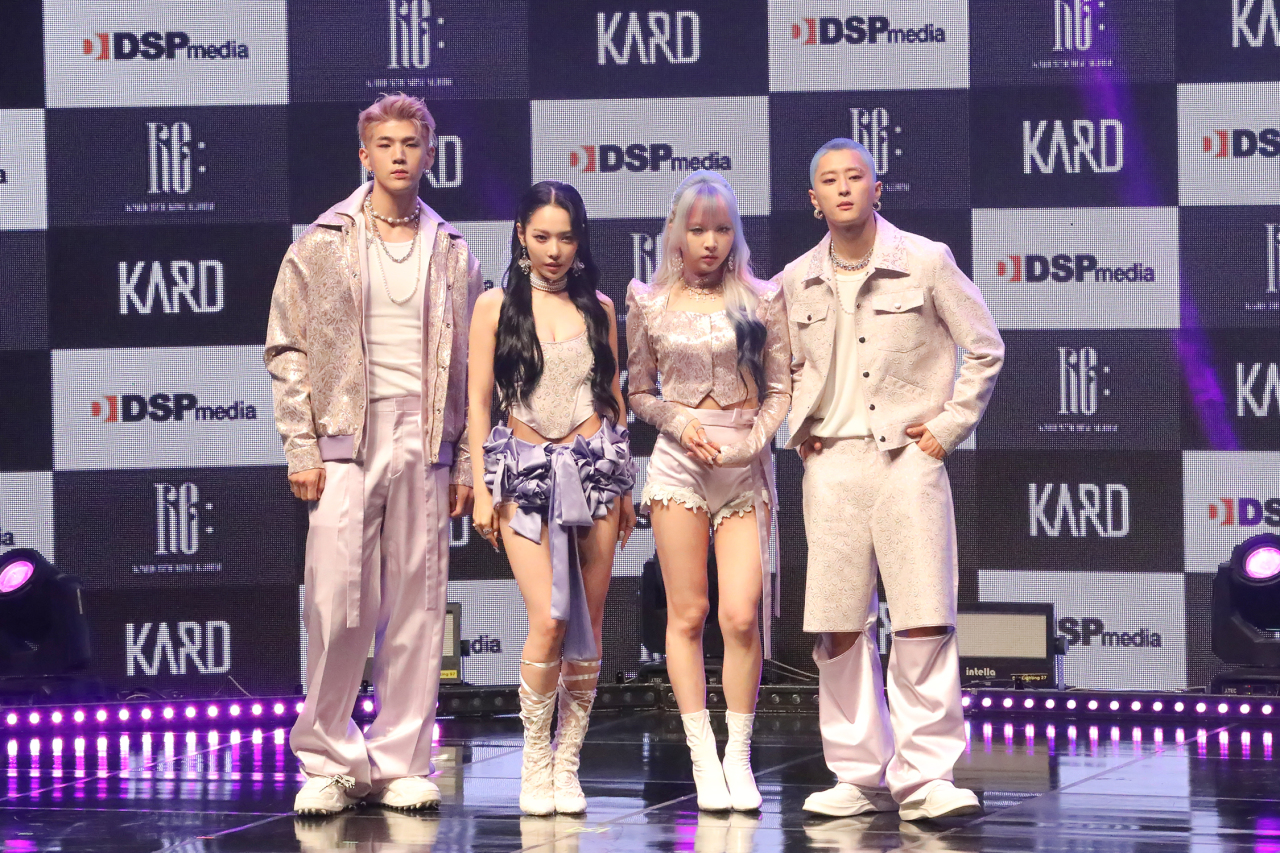 K-pop band Kard holds a press event about its new album, “Re:,” in Seoul on Wednesday. (DSP Media)
Co-ed quartet Kard on Wednesday made its full group comeback after nearly two years with the new album “Re:,” through which the group hopes to embark on a new start of their musical journey.

The four bandmates, consisting of two female members Minseo and Jiwoo alongside male members BM and J. Seph -- said they felt like they were redebuting in preparing the new album, so named the album “Re:.”

“When you add the prefix ‘re-’ in front of a verb, it means to do that action again. As we’re returning after a long while, we’re here with a refreshed mind and passion, which was best described with ‘re-,’” BM said during the act’s comeback press conference in Seoul on Wednesday afternoon.

“We felt like we were starting again and wanted to do really well this time,” Jiwoo said, adding the album signifies a “restart” and “redebut.”

The group is making a complete comeback as a group one year and 10 months since the single album “Way With Words” released in August 2021. This was the longest hiatus the band has been on since its debut in 2017, mainly because of J. Seph’s mandatory military service. J. Seph was discharged from the Army in April, and the four bandmates have been working tirelessly since to prepare the summer comeback.

Rather than drifting afar, the four said they have become even closer during the break. They said they talked with J. Seph over the phone for an hour or two almost every day and even went to watch a musical he starred in while with the military.

“It really feels like I’m back home,” J. Seph said, adding, “I’m really thankful to the members. I know I’m really talkative and they were always empathetic with me. It really helped me to cope with the time.” Minseo chimed in, “We’re really like a family.”

They had rarely talked about their music work during the break, and when they did start to discuss their next project after J. Seph’s return, the bandmates said it hit them how much they had been missing each other.

“I really missed the four of us working together, and somehow this passion shared by us really showed when we prepared for the album. The vibe itself was great and it naturally resulted in an album that we were 100 percent satisfied with,” Minseo said.

J. Seph said the teamwork among the four was also exceptional this time.

“Our zeal and aspiration to make our own (music) was melded into the album. We kept on encouraging and complimenting each other, and although we could have clashed and conflicted, I think we understood and cooperated with each other the best with this album,” he said.

With such refreshed energy, Kard has returned to its early moombahton identity in the album’s lead track “Ring the Alarm.”

“Coming back in a long time, we wanted to showcase the ‘fresh’ Kard and bring back the moombahton music we’d done in our early days. But this time, we had to sound more mature and sexier. That was our goal,” Jiwoo said, referring to “Ring the Alarm.”

Also listed on the four-track album are three side tracks “Break Down,” “Good Love” and “Whip!” “Good Love” is an English-language song.

In dropping the album, Kard will kick off a concert tour in Central and Latin America next month.

“It feels like a dream that we’re going on the tour. It’s been so long. We want to show our performances and share the energy with fans through the concerts,” J. Seph said.

Jumping into the summer comeback rush, Kard said they were ready to show that they were different.

“The four of us all have different strengths, characters and vocal styles. Kard is a really colorful group,” BM noted.

“The compliment I want to hear after people listen to our new album is that ‘Kard did Kard.’ We’re strong in our performance, and the unique harmony we make as a mixed-gender group is what’s unique to us, and we hope the listeners could also feel that and think ‘Kard did Kard,’” J. Seph said.

Looking back, it wasn’t our goal to succeed or make it to the top when Kard was first formed. We just thought that four friends who wanted to do music together for a long time had come together. That first thought really sunk into us this time. It’s an album that shows our passion about music,” Jiwoo said.