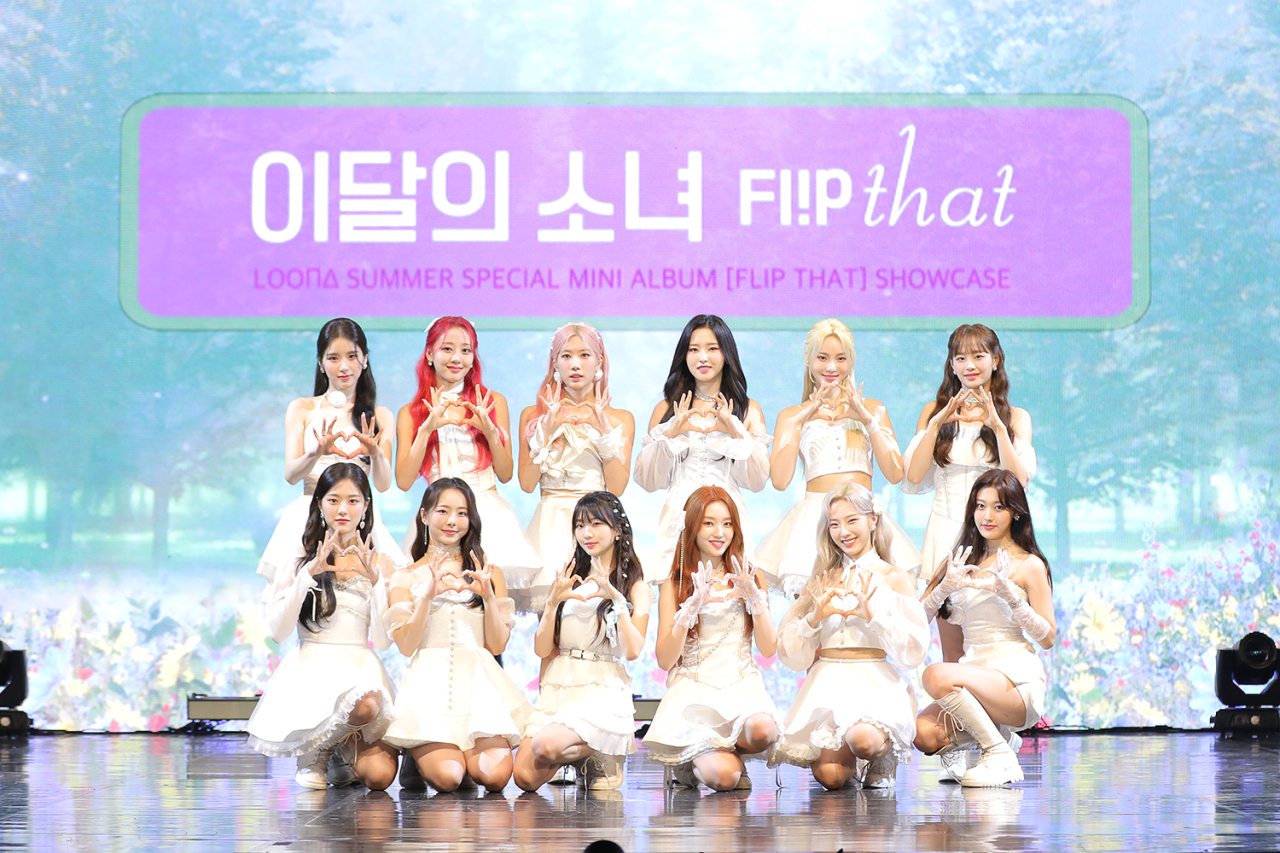 The bandmates of Loona pose for photos during a press showcase for the girl group’s summer special mini album, “Flip That,” at Coex in southern Seoul, Monday. (BlockBerry Creative)
As the summer season approaches and music charts are ready to revel in new anthems, K-pop girl group Loona has eyes set on becoming the new summer queens of the K-pop scene, with a new mini album just in time for summer.

The 12-member act’s new release, “Flip That” marks a return for the full group a year since the release of fourth EP “&” dropped in June last year. It is also the band’s first-ever summer album since the group’s debut in August 2018.

“We have tried to show new charms of ourselves to bring up the image of fresh summer,” Chuu said in a press showcase event held at Coex in southern Seoul on Monday, ahead of the online release of the girl group’s album at 6 p.m.

Yeojin said that the album contains the group’s new journey and sings about the midsummer night’s sweetness. Yves also suggested listeners refresh themselves by listening to the album while the unrelenting hot weather continues.

The six-track EP brings a completely new sound, filled with their individual charms. It starts with the title track, a house-based song featuring catchy melodies and clear synth sounds. It sings about the group’s strong ambition to overturn the world.

“Pose” was introduced to the audience earlier, as the act performed it for the final round of the second season of Mnet’s hit survival show “Queendom,” which aired from March until earlier this month. The track led the group to finish in the runner-up position.

After reacquainting themselves with the public by appearing on “Queendom,” the 12-member act aims to enter the local music charts, according to Heejin. At the same time, the group is eyeing the No. 1 spot on music programs with the summer special mini album, too.

Haseul, Kim Lip and Yves all participated in writing the album’s last track, “Playback.” The song’s lyrics contain the act’s special message to fans. Kim Lip and Haseul said the three put their sincerity into the fan song.

Meanwhile, Loona is set to host its first-ever world tour, aptly called “Loona The World.” Kicking off with two days of concerts in Los Angeles on Aug. 1, the group will visit 13 cities around the US, including San Francisco, Denver, Chicago, Washington and New York, to meet global fans through 14 onstage performances.

Chuu, however, will not join the band’s first international tour due to scheduling conflicts, the band’s agency BlockBerry Creative announced earlier. She revealed her thoughts regarding the absence at the press showcase.

“I feel very sorry and bad about not being able to participate in the upcoming world tour. I tried to join it partially, (but) my absence has been determined. ... Yet I’ll show good sides of me to beloved fans through various performances with ‘Flip That,’ as well as do my best onstage to leave good memories with the promotions.”