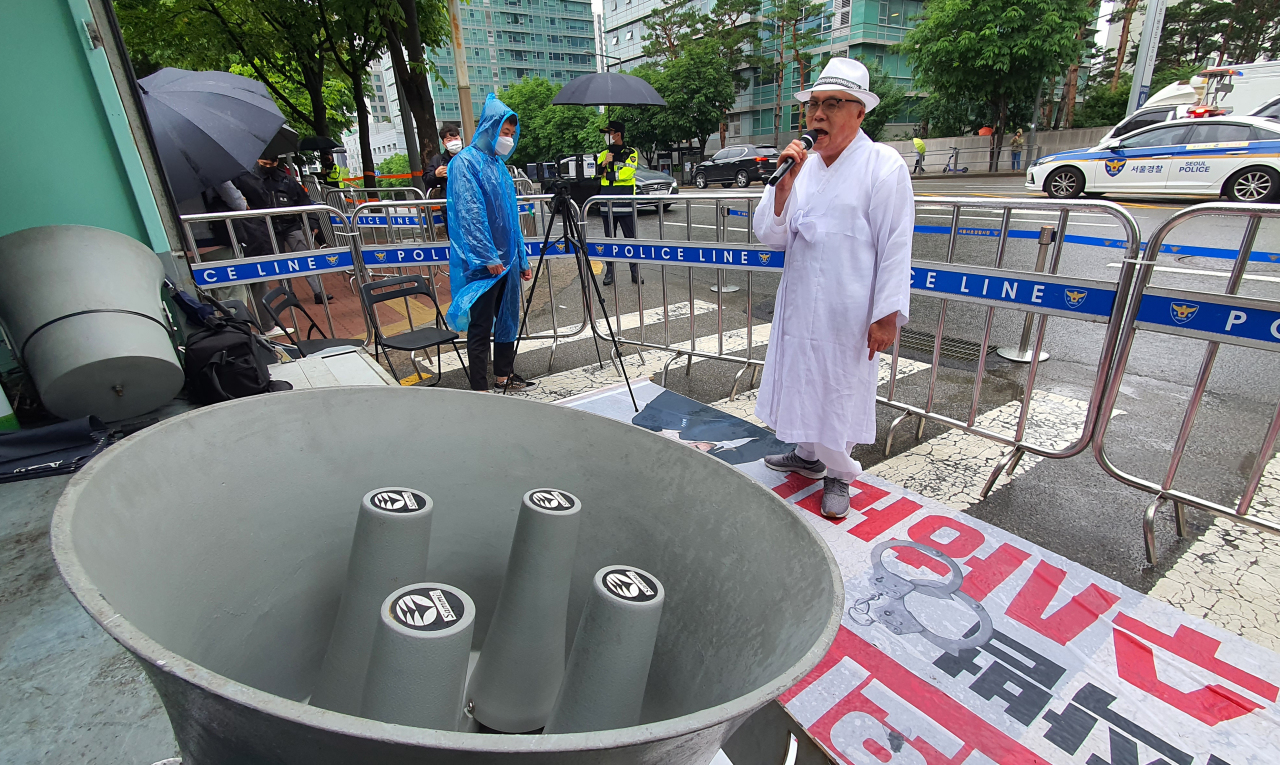 A representative from a local online media outlet speaks during a protest held across from President Yoon Suk-yeol's home in Seocho-gu, Seoul, on Wednesday. (Yonhap)
The rallies near the homes of President Yoon Suk-yeol and his predecessor, Moon Jae-in, are turning into partisan feuds among people with little regard for residents affected by the demonstrations, with both sides proposing a volley of revisions to amend the demonstration law.

Since April this year, a total of seven legislative motions, most of them separately, by the People Power Party and Democratic Party of Korea, have been proposed to revise the demonstration law. But local residents will likely have to continue to put up with the noisy and chaotic demonstrations, as the amendment process drags on in the Assembly.

Police often have difficulties enforcing the law and putting a stop to rallies as South Korea‘s current demonstration law remains open to exploitation by protesters.

The law currently allows police to ban demonstrations based on decibel levels. However, that can be easily avoided as the law allows police only to intervene when protesters violate the decibel rule three times in an hour.

The law also prohibits demonstrations from using chants or signs with insulting words, but there is no rule of thumb by which the police can break up protests.

Demonstrations became increasingly controversial after monthlong protests at former President Moon Jae-in’s home in Yangsan, South Gyeongsang Province. The protests have continued since Moon stepped down as president in May.

At Moon‘s home, far-right groups take turns holding rallies daily, shouting and swearing using loudspeakers. Nearby residents have complained of insomnia and stress from the nuisance. Moon has taken legal action against four of the protestors on charges of defamation, death threats and arson, among many others

As the protests became fierce, lawmakers of the Democratic Party proposed a legislative motion to revise the law so that a former president’s residence could be protected by the law.

From the People Power Party, two groups of lawmakers led by Reps. Ku Ja-keun and Park Dae-chul proposed motions to change the law to prevent demonstrations within 100 meters of the presidential office, citing an increasing number of protests in the area.

Earlier this month, Rep. Park Kwang-on and other Democratic Party members also proposed a legislative motion to ban protesters from inciting hatred against a specific group or an individual during speeches, and from making loud noises.

As of Tuesday, a local online media outlet has been organizing counterprotests near Yoon‘s, demanding the protests at Moon’s home stop.

The counterprotests began in retaliation to Yoon‘s earlier comments in which he refused to condemn the actions of the protestors at Moon’s home. Yoon‘s noncommital response that the protests will be handled by law enforcement angered the online media outlet further.

More recently, Yoon added that he would not comment on the protests outside his own home while referring to the rights of people to assemble and express their views through protest.

Meanwhile, Prime Minister Han Duck-soo stressed that he will take action against the criminal elements of the rallies at both residences, when he was asked after a COVID-19 response meeting on Friday.