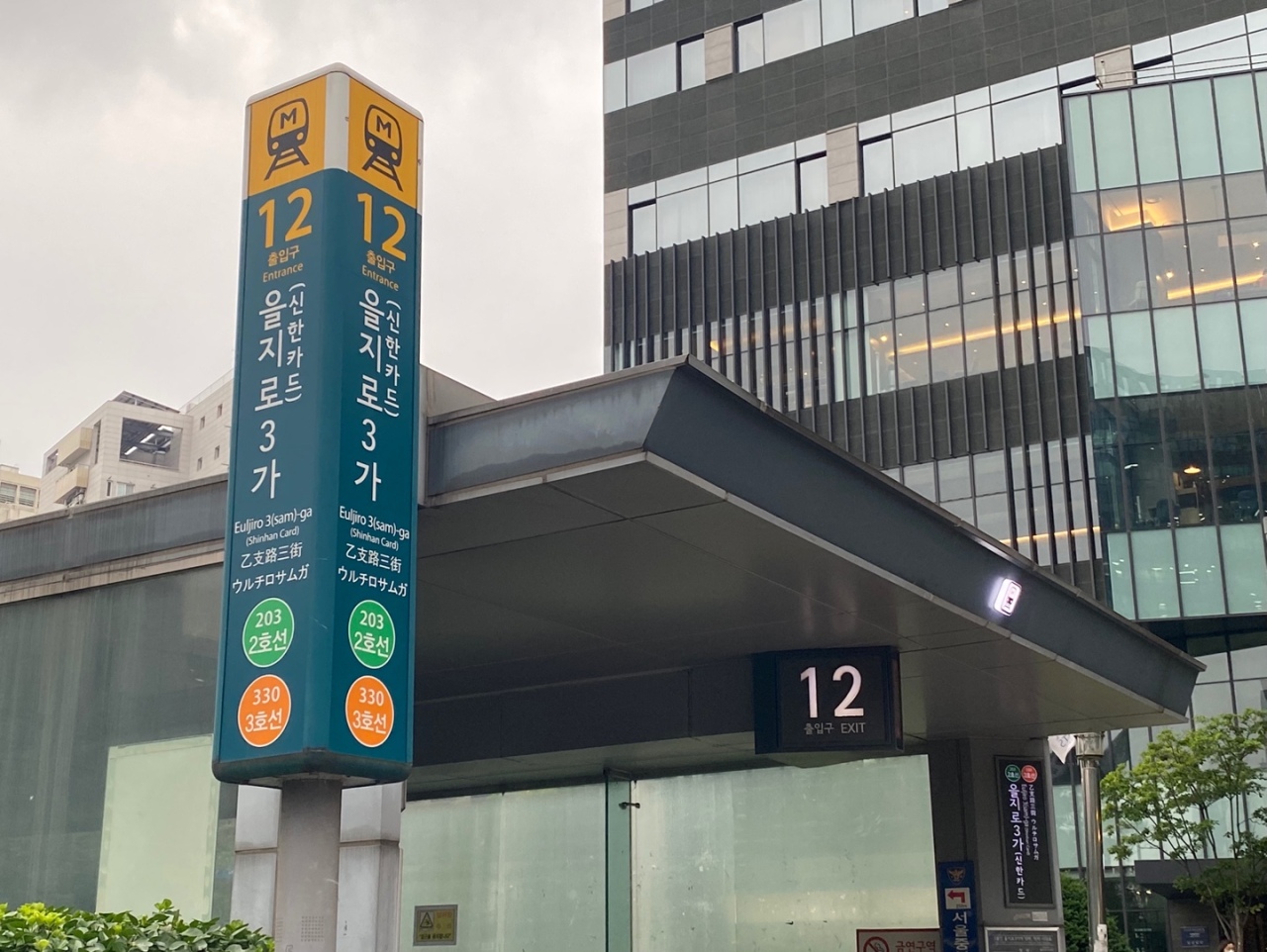 Exit 12 of Euljiro 3-ga Station (Yim Hyun-su/The Korea Herald)
When navigating through Seoul’s subway system, you will see that some stations have two names.

Euljiro 3-ga Station, located in central Seoul with Line 2 and Line 3 running through, is also called “Shinhan Card station” after a credit card company whose headquarters is 10 minutes away on foot.

“I barely pay attention to it, so it doesn’t bother me. If it helps to keep the subway funded and function, then I don’t see the big deal,” Stewart said. 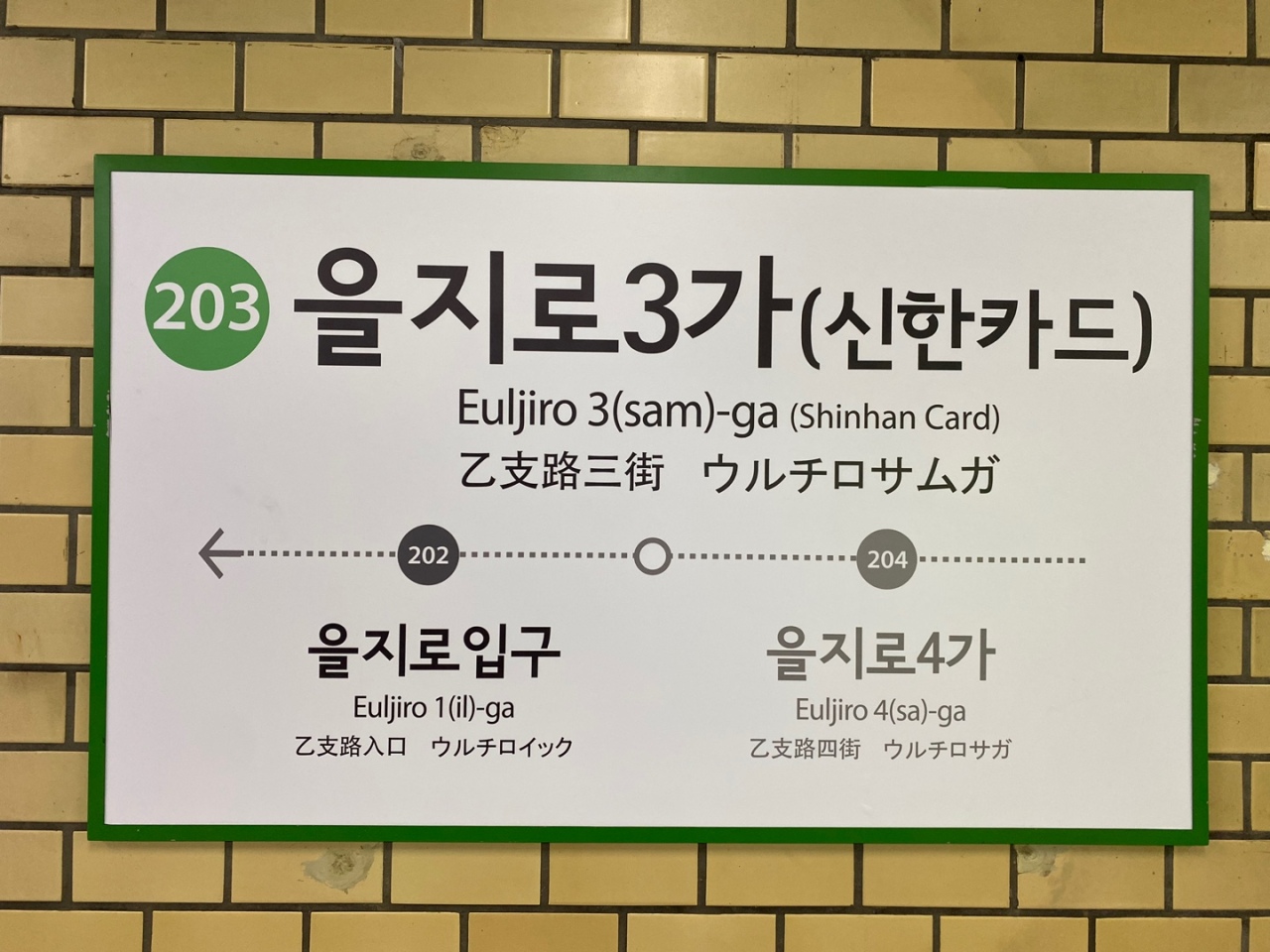 Euljiro 3-ga and Shinhan Card both appear on station signage. (Yim Hyun-su/The Korea Herald)
Last year, Shinhan Card purchased the right to the station’s name to the tune of 900 million won ($697,000). Under the record-breaking deal, the corporation’s name will appear on signs in the station for a duration of three years.

Seoul Metro explained that by owning the right to display its name alongside the station’s original name, clients can use “local symbolism to promote their brand in an effective way.”

There is one rule. Companies or organizations have to be located within 1 kilometer from the station, if it’s within the city, and 2 kilometers if outside Seoul.

Euljiro 3-ga is a business district and naturally, the neighborhood is full of tall office buildings and home to many financial service companies including the headquarters of Mirae Asset Securities and state-owned Industrial Bank of Korea.

With Shinhan Card’s name plastered all over the signs and sounded out in the automated announcements, tens of thousands of passengers getting off the train at the station are reminded of the brand. Some 17,000 passengers traveled from the station on a daily basis between January and May this year, according to official data from Seoul Metro.

A few subway stops away is Seodaemun Station on Line 5 which has also been introduced in train announcements as Kangbuk Samsung Hospital -- a hospital that is part of Samsung Medical Center.

But as the joint-name licensing deal comes to an end, Seodaemun Station is again up for grabs alongside scores of other subway stations across the city and beyond. 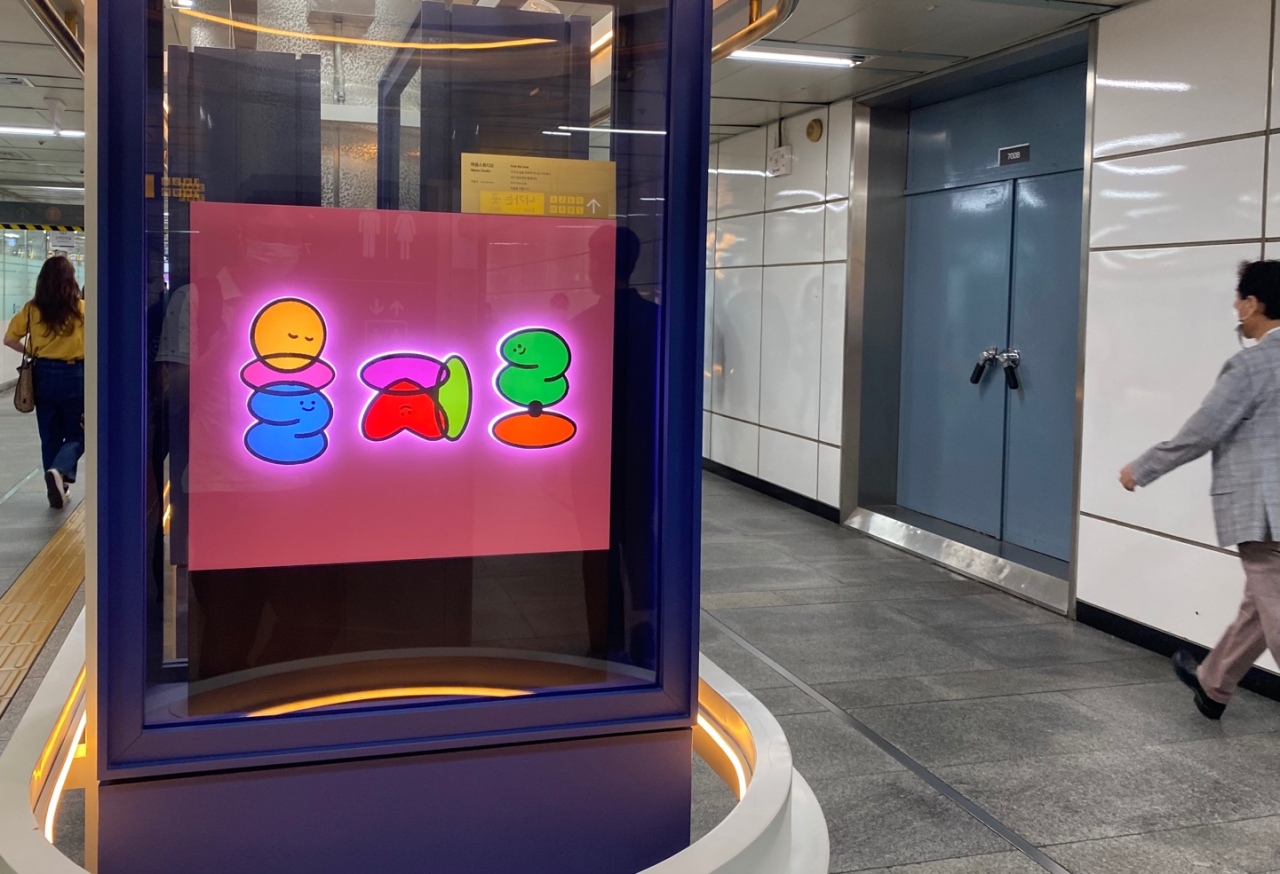 An artwork funded by Shinhan Card, installed at Euljiro 3-ga Station (Yim Hyun-su/The Korea Herald)
In an announcement earlier this month, the operator of the metropolitan subway system revealed that a total of 50 subway stations have been made available for the naming rights deal. Forty-two new stations including Gangnam, Yeouido and Gongdeok stations were included for the first time this year.

Between January and May, Gangnam saw the second-highest number of transfer passengers. And in line with the station’s popularity, the bidding process, which ends Wednesday, began at a record-breaking 876 million won. As the final bid price is often higher, Gangnam is on course to become the priciest subway station name to purchase.

“Various factors are considered when measuring the price tag but it’s mainly how expensive the land and property price in the area and how much passenger traffic each station generates,” one Seoul Metro official explained.

“One company, which has multiple locations around the city, can only purchase one subway station to promote one brand or store.”

Whether the name is appropriate or not is decided through a process convened by a committee consisting of three internal and three external members, the official added. The candidate is chosen through a closed-bid tender. 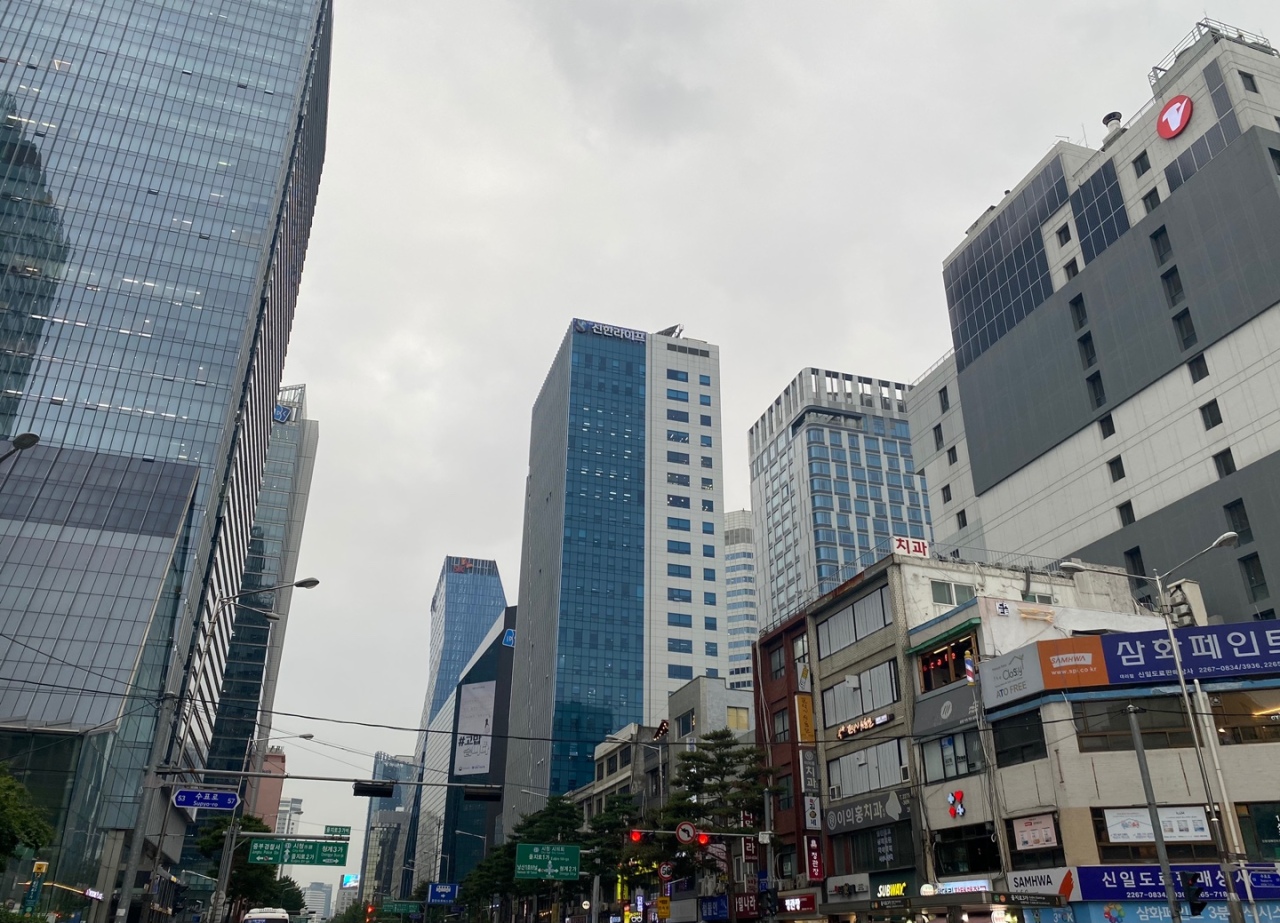 Seoul Metro’s naming rights sales come as it has struggled with yearslong deficits.

The subway system suffered a net loss of 1.1 trillion won in 2020. It was in the red again the following year, losing some 960 billion won.

In a recent report released by Seoul Metropolitan Council, Seoul Metro was urged to secure sustainability by reducing losses and risks.

While the COVID-19 pandemic saw a decline in public transport traffic, in-depth discussions are necessary on reviewing the viability of offering free rides and subway fares that have been frozen since 2015, the report warned.

Citing Seoul Metro’s internal data, the report also said the city’s subway system makes less per passenger than its counterparts in London, New York and Beijing, earning $0.88 per passenger. When broken down by mileage, Seoul fared worse than Hong Kong and Singapore, making $0.07 per kilometer.

Against this backdrop, free subway rides for passengers aged over 65 have faced calls to be revised. But experts argue that providing free rides for senior citizens help alleviate financial burdens on the public. A study by the Korea Transport Institute found that the policy was linked to a drop in depression, suicides and traffic accidents.

In February, Seoul Mayor Oh Se-hoon said there were no plans to raise fares for the city’s subway, citing inflation and a growing financial burden on members of the public.