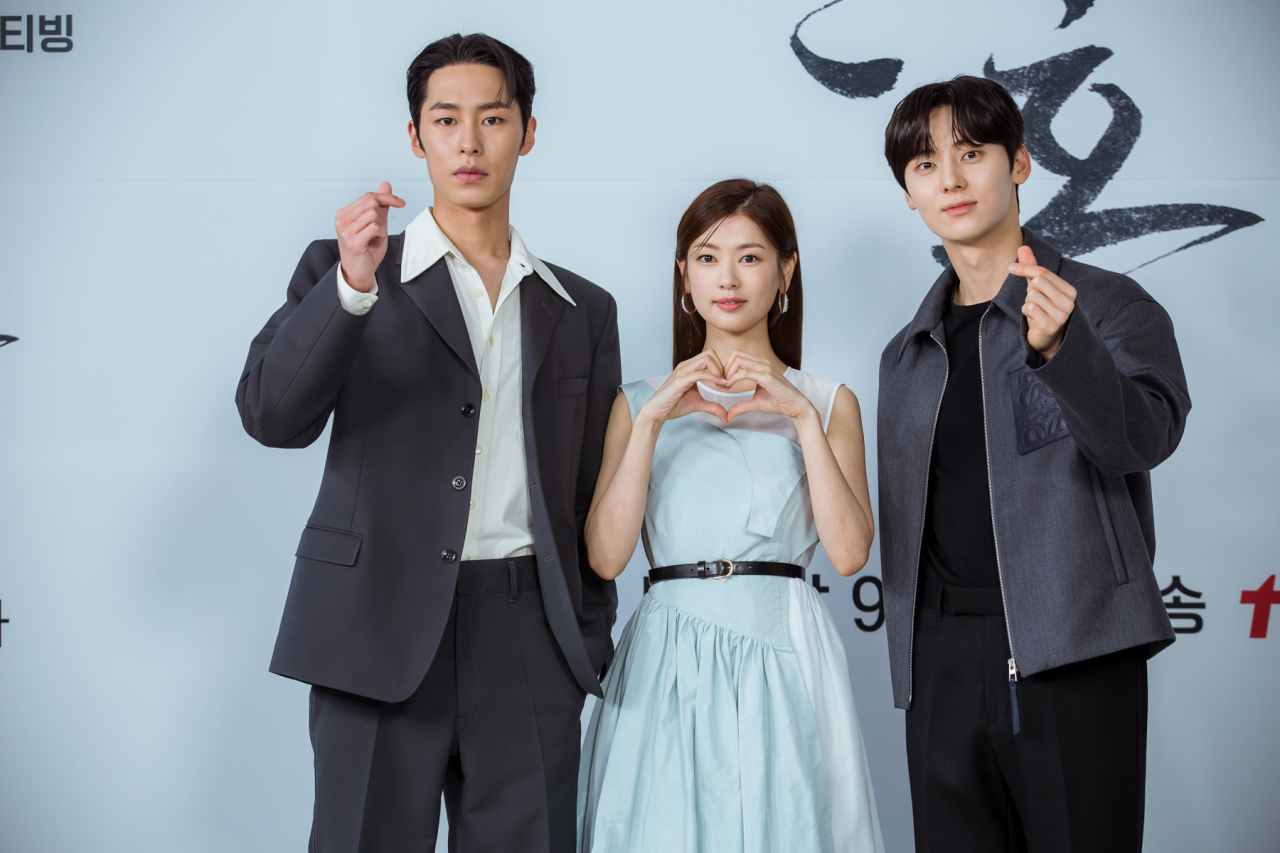 From left: Actors Lee Jae-wook, Jung So-min and Hwang Min-hyun pose for photos before an online press conference Tuesday. (tvN)
The cast and staff of tvN‘s upcoming historical fantasy romance “Alchemy of Souls” are confident that their work has everything viewers look for in a drama.

Jung So-min, 33, who plays the lead role in “Alchemy of Souls,” also showed confidence in the series. 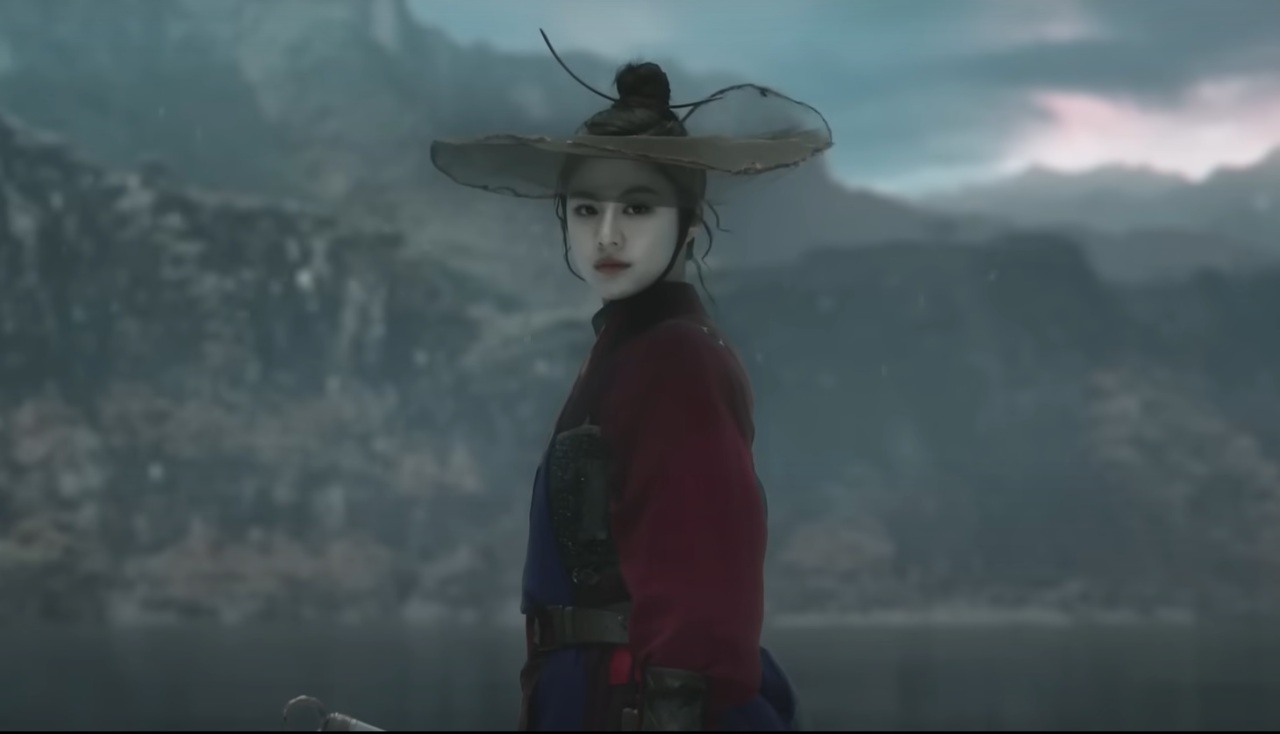 A screenshot from the teaser for “Alchemy of Souls” shows an elite warrior named Naksu, played by Jung So-min. (tvN)
“The complex relationships between characters change in each episode. Our show doesn’t exclusively focus on the romance of the lead couple. From smile-inducing fantasies to hard-hitting action, ‘Alchemy of Souls’ is more like a huge gift box,” Jung said.

The series revolves around an elite warrior named Naksu (played by Jung) from a fictional world called Daeho. Naksu‘s soul becomes trapped in the body of Mu-deok, a servant in a noble family. The story develops as Mu-deok meets a diverse cast of characters, including her master Jang Wook. 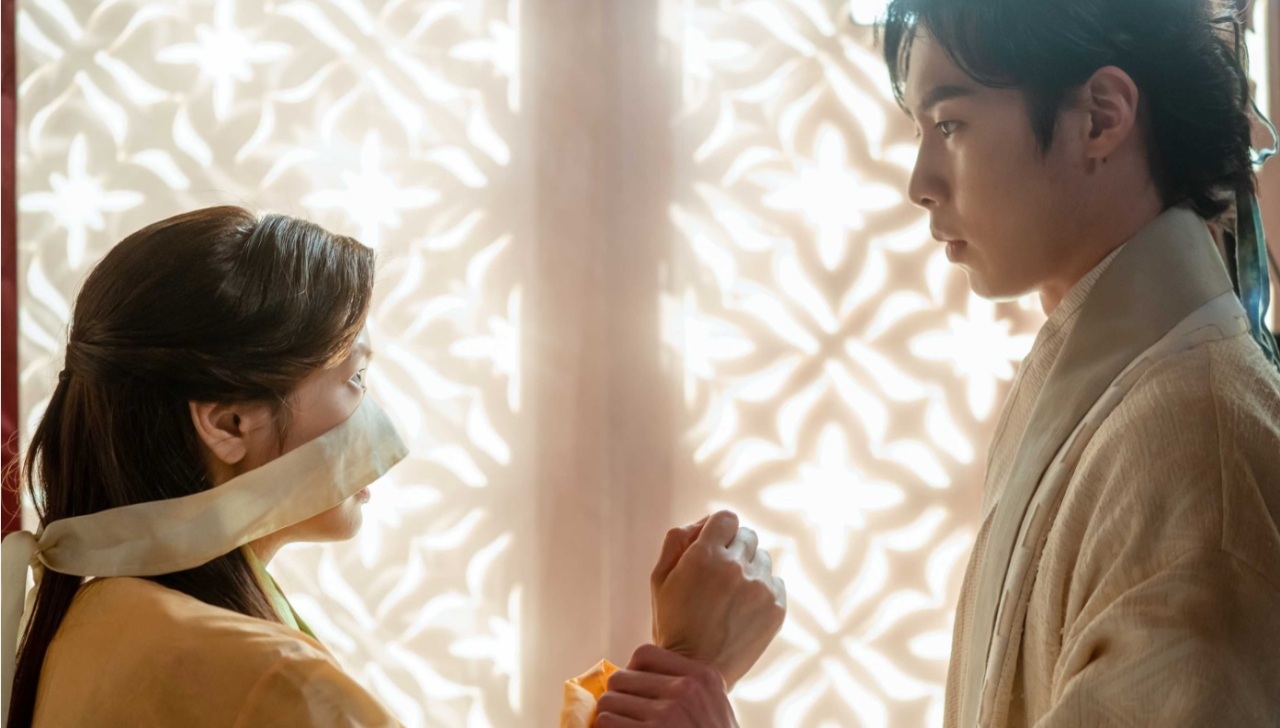 “Alchemy of Souls” (tvN)
“Alchemy of Souls” is one of the most highly anticipated series of the year thanks to the writing team of Hong Jung-eun and Hong Mi-ran -- commonly known as The Hong Sisters -- who were behind the hit fantasy romance “The Master’s Sun” (2013) and “Hotel Del Luna” (2019).

Singer-turned-actor Hwang Min-hyun (formerly of K-pop boy band NU‘EST) feels that the dynamic action scenes will excite viewers, but also agrees that the engaging storylines will draw people, too.

Veteran actor Yu Jun-sang, who returns to the small screen for the first time in 18 months, said his break period was for “Alchemy of Souls.”

“I was not able to do other work. I spent much time studying action sequences and shooting those scenes with my fullest effort. Working with young stars gave me a good deal of energy as well,” Yu said, talking about the chemistry he felt while working with young actors, such as Lee Jae-wook, Yoo In-soo of Netflix’s “All of Us Are Dead” and Arin from girl group Oh My Girl.

Yu highlighted the beautiful locations the show was shot in, saying that he believes that viewers will become interested in those places.

Director Park pointed out that his upcoming series will feature the first part of the story, with a second part in the works already.

“When Hong sisters were writing the script, we discussed so many interesting stories about different families, characters and their development. Unfortunately, I thought 20 episodes would not be enough to really show the strengths of the scriptwriters who create very entertaining and comical stories,” the director said.

“The scriptwriters are currently working on part two as well. Hopefully, we will have more time to explore each individual character in detail,” Park added.

“Alchemy of Souls” will also be available via streaming platforms Tving and Netflix.