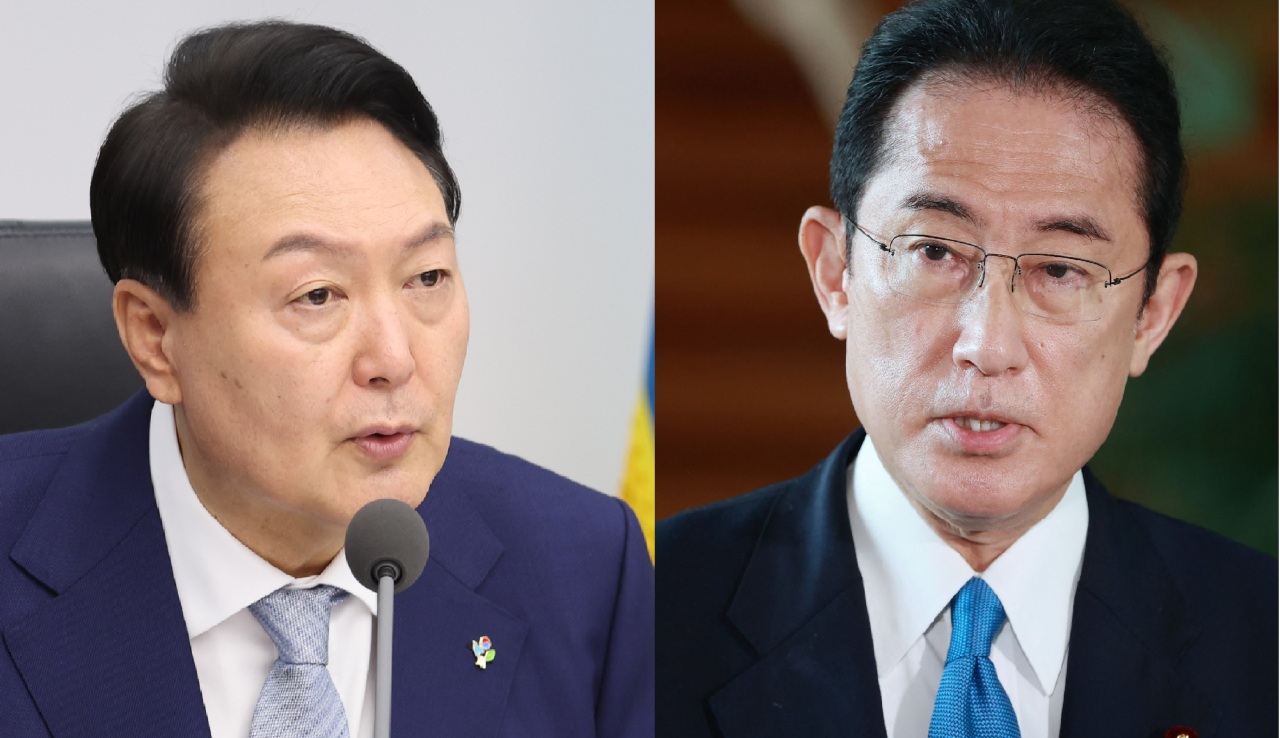 South Korean President Yoon Suk-yeol (left) and Japanese Prime Minister Fumio Kishida (Photos from Yonhap)
As South Korea’s new administration is ratcheting up efforts to bolster trilateral relations with the United States and Japan amid increasing threats from the North, Seoul’s foreign minister raised expectations for the normal operation of an intelligence-sharing pact with Tokyo.

But with the South Korea-Japan relationship standing at its lowest point due to the two countries’ differences on Japanese atrocities stretching back to its colonial occupation of Korea, diplomatic reconciliation should precede the revival of the General Security of Military Information Agreement, experts here say.

In his first bilateral meeting with US Secretary of State Antony Blinken in Washington, South Korean Foreign Minister Park Jin said, “With regard to GSOMIA, we want GSOMIA to be normalized as soon as possible together with the improvement of the Korea-Japan relationship.”

Park added during a press conference held after his bilateral meeting with Blinken on Monday: “In order to deal with the threat from North Korea, we need to have policy coordination and a sharing of information between Korea, Japan and the United States.”

The neighboring countries first forged the intelligence-sharing agreement in 2016, opening a channel for the direct exchange of military information for the first time. Before, they would each share essential security-related information through US authorities, their common ally.

Under the agreement, the two countries had exchanged dozens of pieces of information up to 2019. But after that point, their relationship hit rock bottom following Japan’s introduction of trade-curbing measures in an apparent retaliation against South Korea’s top court ordering a Japanese company to sell off its assets to provide compensation to Korean victims of wartime forced labor during the Japanese colonization period.

As a countermeasure to Tokyo’s trade sanctions, Seoul mulled the option of terminating GSOMIA, although it ultimately renewed the pact. Still, the dispute has affected information exchange between the two countries since.

Over Park’s remarks, South Korea’s Foreign Ministry said the minister was referring to a general principle, and that it will continue communicating with the Japanese authorities. 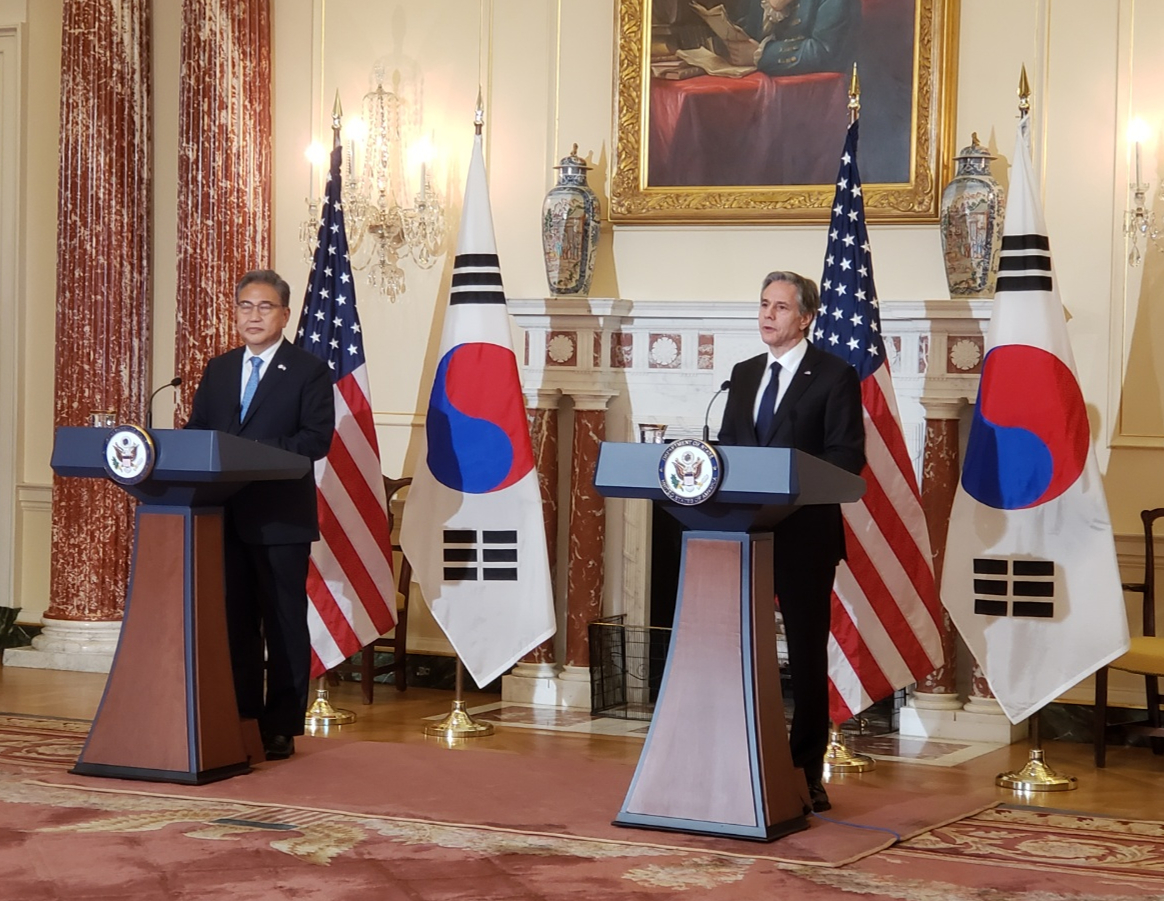 South Korean Foreign Minister Park Jin (left) and US Secretary of State Antony Blinken speaks at a press conference following their bilateral meeting in Washington on Monday. (Yonhap)
Experts here say smooth operation of GSOMIA can be the barometer of Korea and Japan’s relationship, and that diplomatic efforts should precede the intelligence-sharing agreement’s normalization.

“GSOMIA can be seen as the foundation of a stronger trilateral cooperation between South Korea, the US and Japan. Normalizing GSOMIA would also support the bilateral cooperation of Seoul and Tokyo, benefitting them both in handling North Korea,” Jin Chang-soo, a Japan expert at the think tank Sejong Institute, told The Korea Herald.

An official at Seoul’s Joint Chiefs of Staff also highlighted the importance of GSOMIA in the two countries’ relationship. He stressed that diplomatic relations should first be resolved for the intelligence-sharing pact to work out.

“GSOMIA is a symbol showing the determination of South Korea, the US and Japan to work together to counter North Korea’s nuclear tests and missile provocations,” the official told The Korea Herald under the condition of anonymity.

“If diplomatic talks run smoothly, the operation of GSOMIA would naturally be normalized -- they go in tandem,” the official said, adding there are still a list of unresolved issues where the two countries stand at odds, including Japan’s coercion of Koreans into labor and sexual slavery during the colonization period.

Speculations have been running high over whether the two leaders would hold an official bilateral summit on the sidelines of the international session, but Seoul and Tokyo appear to have not yet drawn an agreement on the matter.

On Wednesday, President Yoon said “nothing has been decided” on the possibility of the bilateral summit with Prime Minister Kishida.

A Japanese daily, on the other hand, reported that its government is reviewing the option to not hold the speculated summit. Citing several government officials, the Sankei Shimbun said the Japanese government is coordinating with Seoul “to not hold a bilateral summit.”

The news outlet blamed South Korea, saying that it “has not provided a solution on the so-called recruitment lawsuits,” referring to Korea’s top court ruling in favor of the forced labor victims. It also claimed Seoul had conducted “unauthorized marine surveys” around the Dokdo islets, over which Japan claims sovereignty.

If the summit were to be held, it would be the first in about two and a half years since December 2019.

While Yoon and Kishida may not be seeing each other at a bilateral summit, they are likely to hold a trilateral summit including US President Joe Biden, according to sources cited by news reports here.