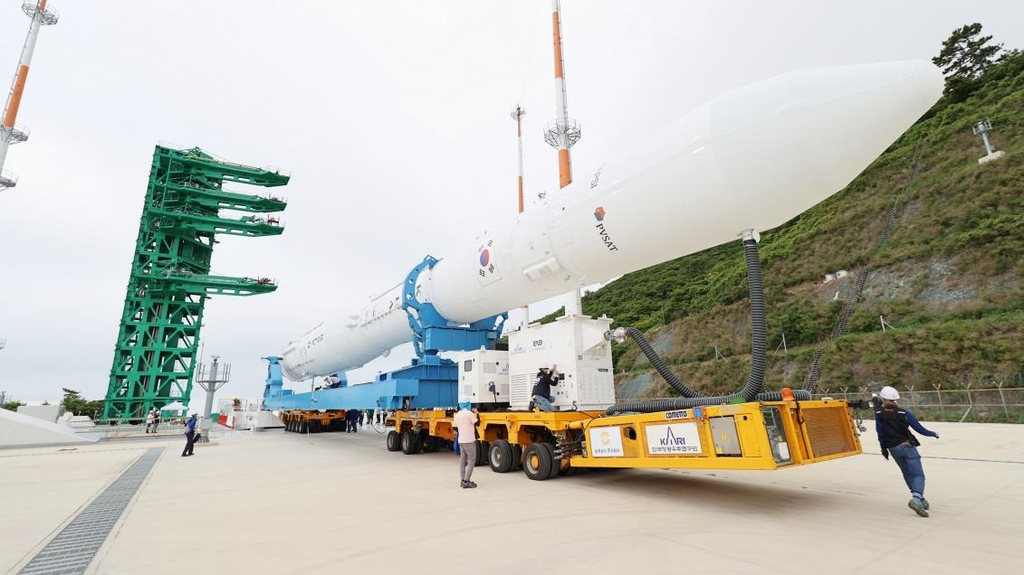 This photo provided by the Korea Aerospace Research Institute on Wednesday shows South Korean space rocket Nuri being transported to the launch pad at Naro Space Center in Goheung, some 470 kilometers south of Seoul. (Yonhap)

South Korea's first homegrown space rocket Nuri was being positioned at the launch pad at Naro Space Center on Wednesday, a day ahead its second attempt to send multiple satellites into orbit.

The Ministry of Science and ICT said Nuri, also known as KSLV-II, was rolled out from the assembly building to the launch pad at the state-run space center operated by the Korea Aerospace Research Institute in Goheung, a southern coastal village some 470 kilometers south of Seoul.

The three-stage rocket is expected to be erected before noon and will then undergo check-ups in the afternoon ahead of Thursday's scheduled launch.

South Korea had planned to launch Nuri on Wednesday, but strong winds forced the country to delay the launch by a day.

In its first attempt in October, Nuri successfully flew to a target altitude of 700 kilometers but failed to put a dummy satellite into orbit as its third-stage engine burned out earlier than expected.

Unlike the first launch, Nuri this time will be loaded with a 180-kilogram performance verification satellite to test the rocket's capabilities and four cube satellites developed by four universities for academic research purposes.

South Korea has invested nearly 2 trillion won ($1.8 billion) in building Nuri since 2010. The project was carried out with domestically made technology on its own soil, including design, production, testing and launch operation.