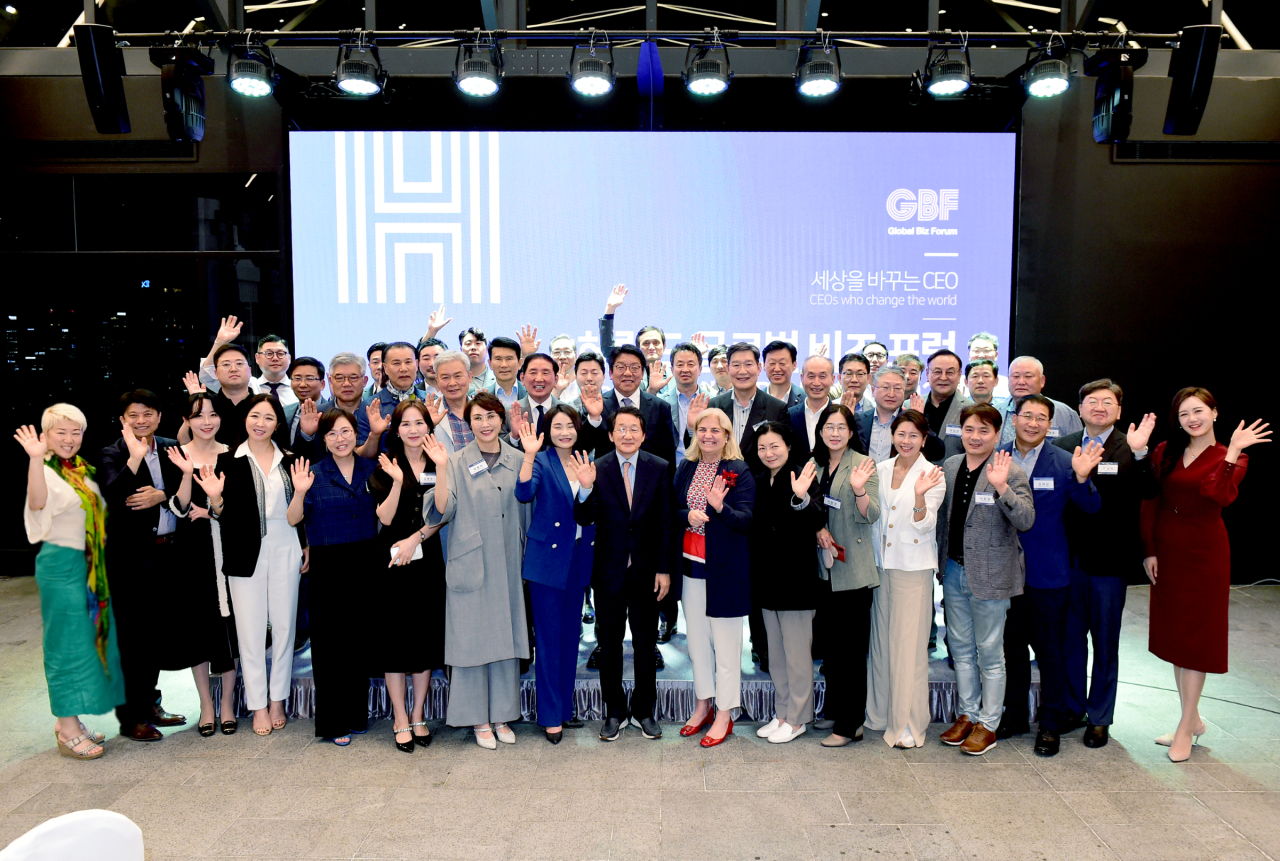 CEOs and guests pose for a group photo at the second session of The Korea Herald’s Global Business Forum at the Ambassador Hotel, Seoul, on June 8. (Jenny Sung)
The European Union and Korea stand united in the face of threats amid the Russia-Ukraine war, EU Ambassador Maria Castillo Fernandez said at The Korea Herald’s Global Business Forum on June 8 in Seoul.

Castillo Fernandez called the war a “blatant” violation of international law by Russia and a challenge to the international rules-based order, sovereignty and territorial integrity.

“EU and Korea are firmly on the same page addressing Russia’s aggression and the imposition of sanctions against Russia,” Castillo Fernandez said.

“The Russian invasion has created a negative impact in global economy and exacerbate already existing trends, affecting consumers all over the world and increasing poverty and hunger,” she said.

She warned that a rapid fall in share prices and cryptocurrency valuations could trigger a new financial crisis. 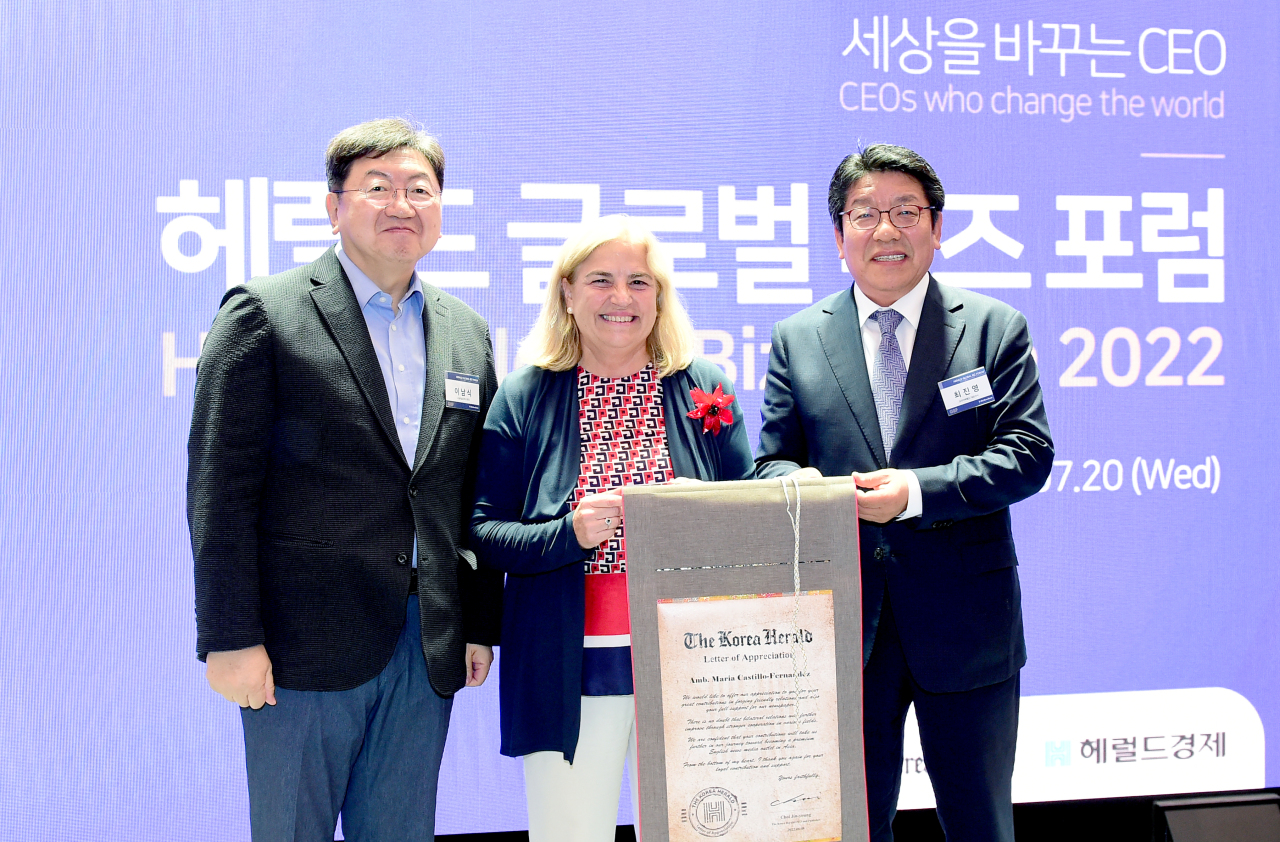 Seoul Institute of the Arts President Lee Nam-sik (first from left) and The Korea Herald CEO Choi Jin-young (third from left) presents a letter of appreciation to EU Ambassador to Korea Maria Castillo Fernandez at the second session of The Korea Herald’s Global Business Forum at the Ambassador Hotel, Seoul, on June 8. (Jenny Sung)
Saying that the impact is already visible, Castillo Fernandez said a sharp rise of the US dollar exchange rate in turn could decelerate growth in the years to come for countries whose currencies are depreciating.

“For 2022, GDP growth forecasts have been reduced to around 2.5 percent both in the EU and Korea,” she said stressing economic security, resilience of supply chains through diversification and “friend-shoring” as clear emerging concerns for like-minded countries such as the EU, US and Korea.

“All of these enormous challenges have contributed to accelerating a green and digital transition in every aspect of life.”

The twin transition to both green and digital economies has been a key pillar of the post-pandemic recovery, but also a response to Russia’s war in Ukraine, she said. 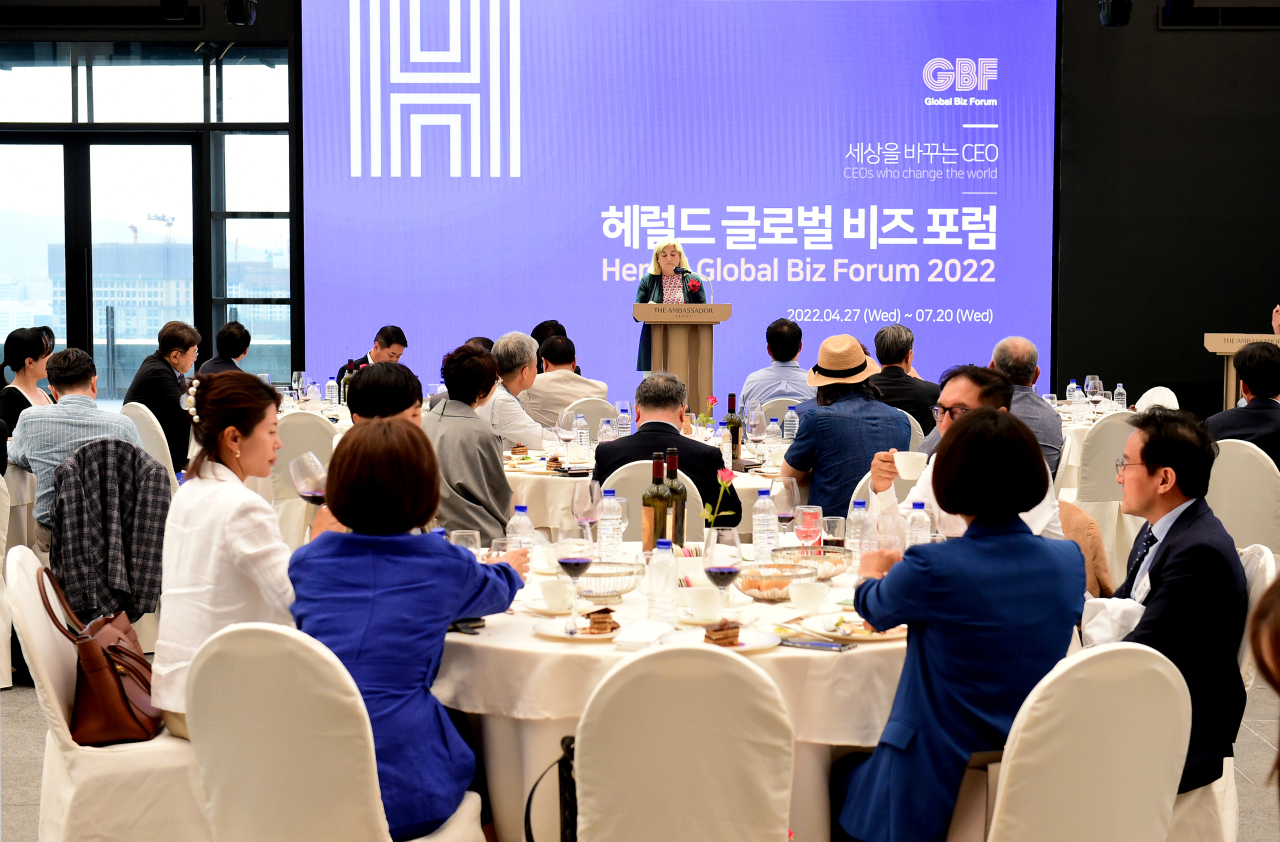 EU Ambassador to Korea Maria Castillo Fernandez addresses CEOs at The Korea Herald’s Global Business Forum at the Ambassador Hotel, Seoul, on June 8. (Jenny Sung)
“These issues are the common denominators to the new cooperation platforms such as the EU Indo-Pacific Strategy -- our political reengagement with this region, to build closer partnerships, in particular, in green, digital, security,” she said.

The EU-Korea economic relationship continues to be on path of steady growth, after the free trade agreement came into force in 2011, and remains a solid bedrock, according to Castillo Fernandez.

The 11-year implementation of the FTA comes with a more than 70 percent growth in bilateral goods trade, reaching 110 billion euros ($115 billion) in 2021, she said.

“This represents 10 percent of Korea’s total trade with the world,” she underlined. The EU is Korea’s third-largest trade partner, and Korea is the EU’s ninth-largest partner.

Trade in the service sector hit a significant growth of more than 70 percent in 2020 compared to 2011, reaching about 20 billion euros. 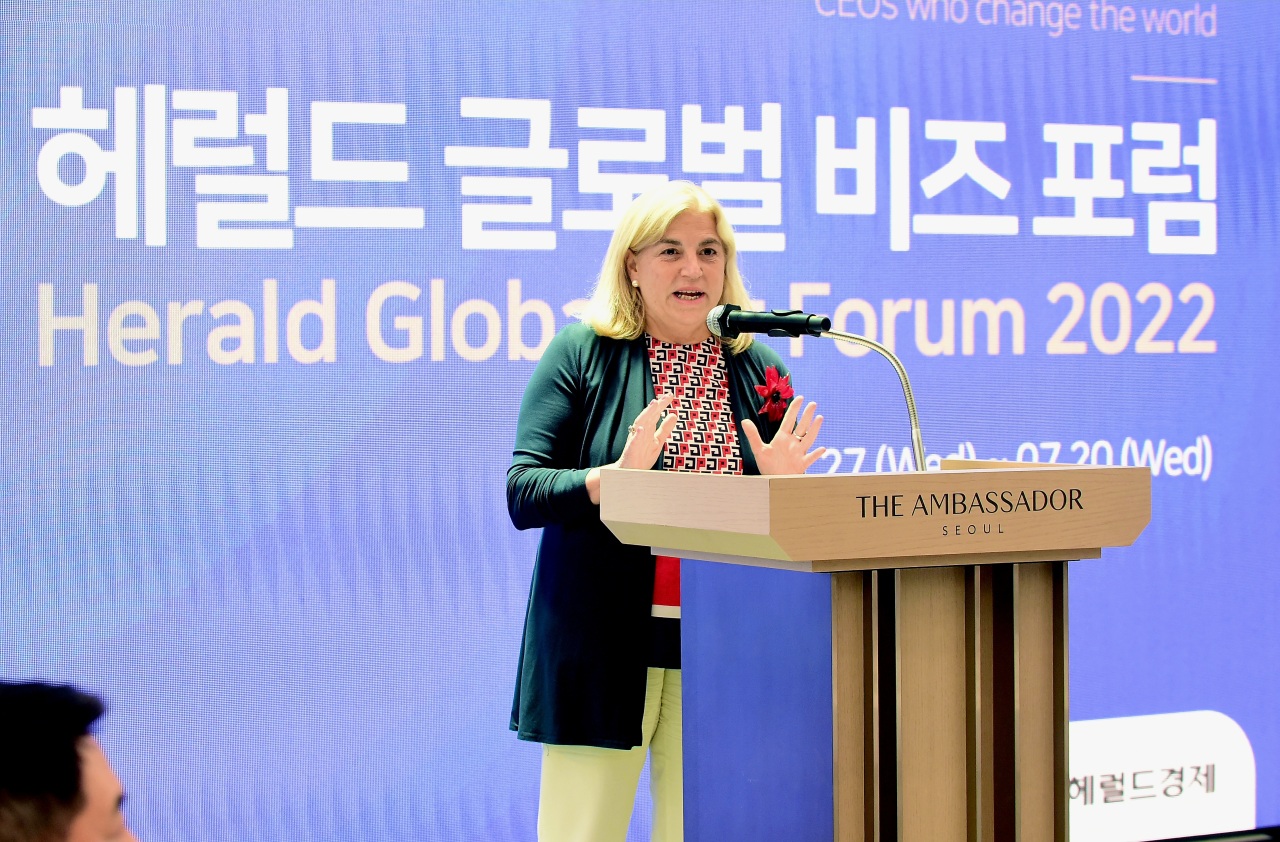 EU Ambassador to Korea Maria Castillo Fernandez delivers remarks at the second session of The Korea Herald’s Global Business Forum at the Ambassador Hotel, Seoul, on June 8. (Jenny Sung)
“EU remains the largest source of FDI stock in Korea,” she said, adding it was also well ahead of Japan and the US in this regard.

EU companies were able to create jobs in Korea through win-win partnership with Korean firms, most notably in the semiconductor sector.

She gave the example of Netherlands-based Advanced Semiconductor Materials Lithography. ASML is the world’s only supplier of the semiconductor industry’s most-advanced extreme ultraviolet lithography machines -- which are considered key in the world’s race for chips under a 5 nanometer manufacturing process.
“ASML is also the single-largest European exporting company to Korea,” she highlighted.

She underlined President Yoon Suk-yeol’s ambition to grow Korea’s dominance in semiconductors as an important area for cooperation with the EU.

Castillo Fernandez also pointed to the EU’s expertise in offshore wind plants, green technology and renewables, and that there are ongoing projects in Ulsan.

Using the Korean word “wigi,” meaning “crisis,” the EU ambassador explained that it is composed of two Chinese characters, meaning “danger” and “opportunity,” and likened to how a crisis can also present new opportunities and new choices for business growth.