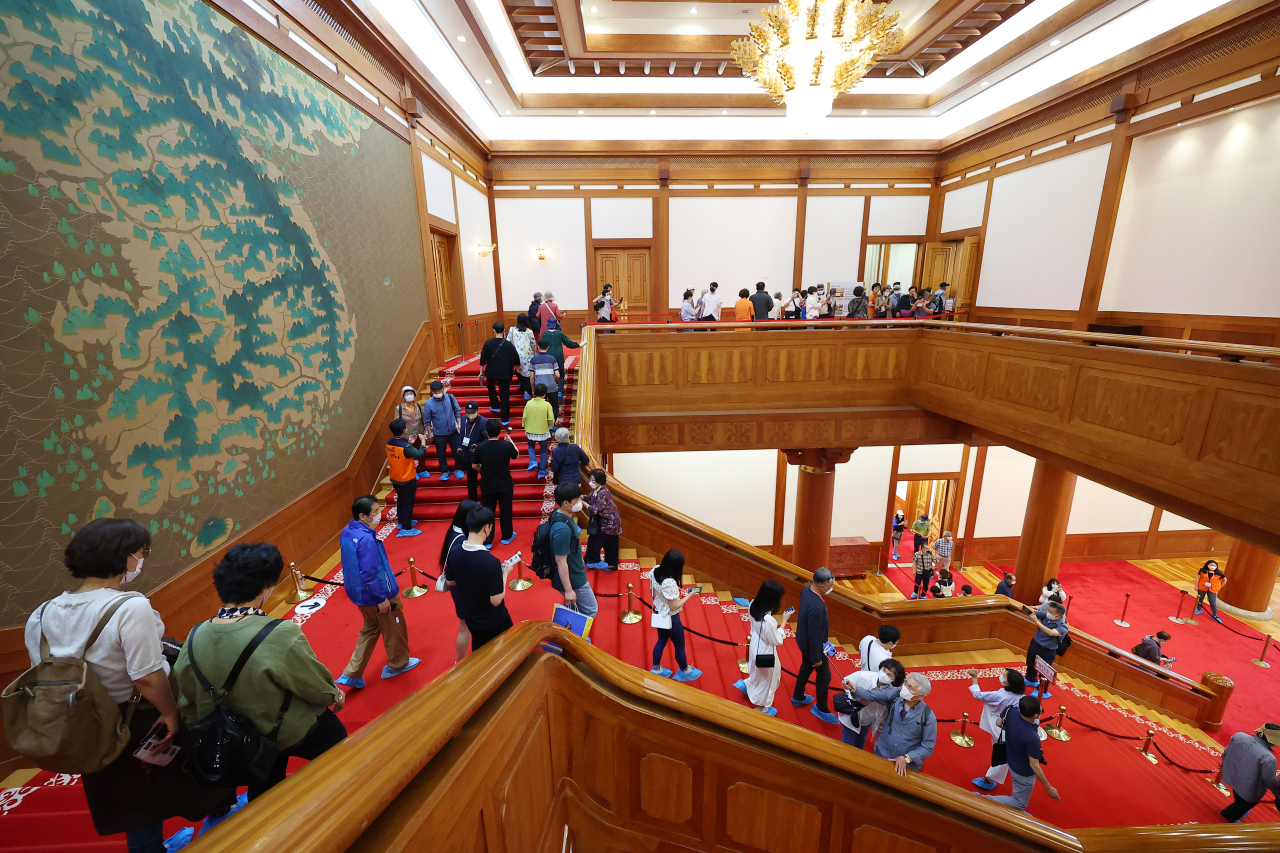 Visitors look around the main building of Cheong Wa Dae on May 26. A painting of the Korean Peninsula is hung on the wall. (Yonhap)
The government is going through the works of art stored and displayed at Cheong Wa Dae, aiming to publish an art catalog and introduce works that have been collected since the Republic of Korea was established in 1948.

“We are sorting through the artwork collected at Cheong Wa Dae. The results will be published as an art catalog, which is expected to come out this year,” an official from the Ministry of Culture, Sports and Tourism told The Korea Herald.

Whether an exhibition of the art held by the presidential office will be arranged is under discussion, according to the ministry.

Since Cheong Wa Dae, also known as the Blue House, was opened to the public upon the inauguration of the Yoon Suk-yeol government, the art collection inside the buildings of Cheong Wa Dae has attracted interest. It is estimated that the collection consists of some 600 pieces. 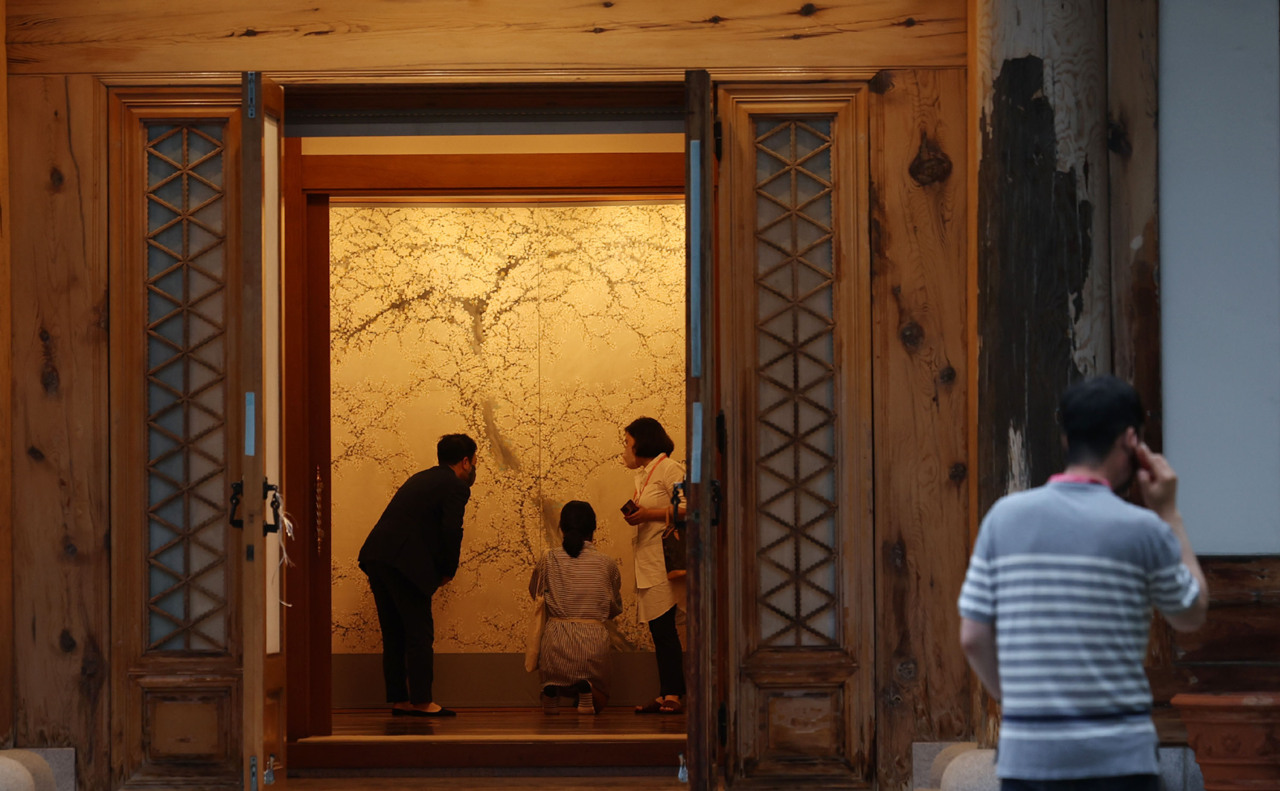 Reporters look at “White Plum Blossom” by Huh Dal-jae on May 25 at Cheong Wa Dae. (Yonhap)
A rumor surfaced in April that new first lady Kim Keon-hee, who has a career in art curation, would lead such an exhibition. However, the presidential transition team denied the rumor, saying “it is something to be dealt with only after the inauguration.”

Kim has curated several exhibitions as the head of Covana Contents, an art exhibition company, including for Mark Rothko, Le Corbusier and Alberto Giacometti exhibitions.

Little is known about the art at Cheong Wa Dae, except that masterpieces by renowned artists such as Paik Nam-june and Lim Ok-sang are among the collection. One piece that is relatively well-known to the public is “Port of Tongyeong,” a large painting in vivid colors by Jeon Hyuk-lim. The work, which the late President Roh Moo-hyun commissioned in 2006, was moved into storage after Roh’s successor, President Lee Myung-bak, came into office. In 2018, during the Moon Jae-in administration, the painting was taken out of storage to be hung once again at the Blue House. 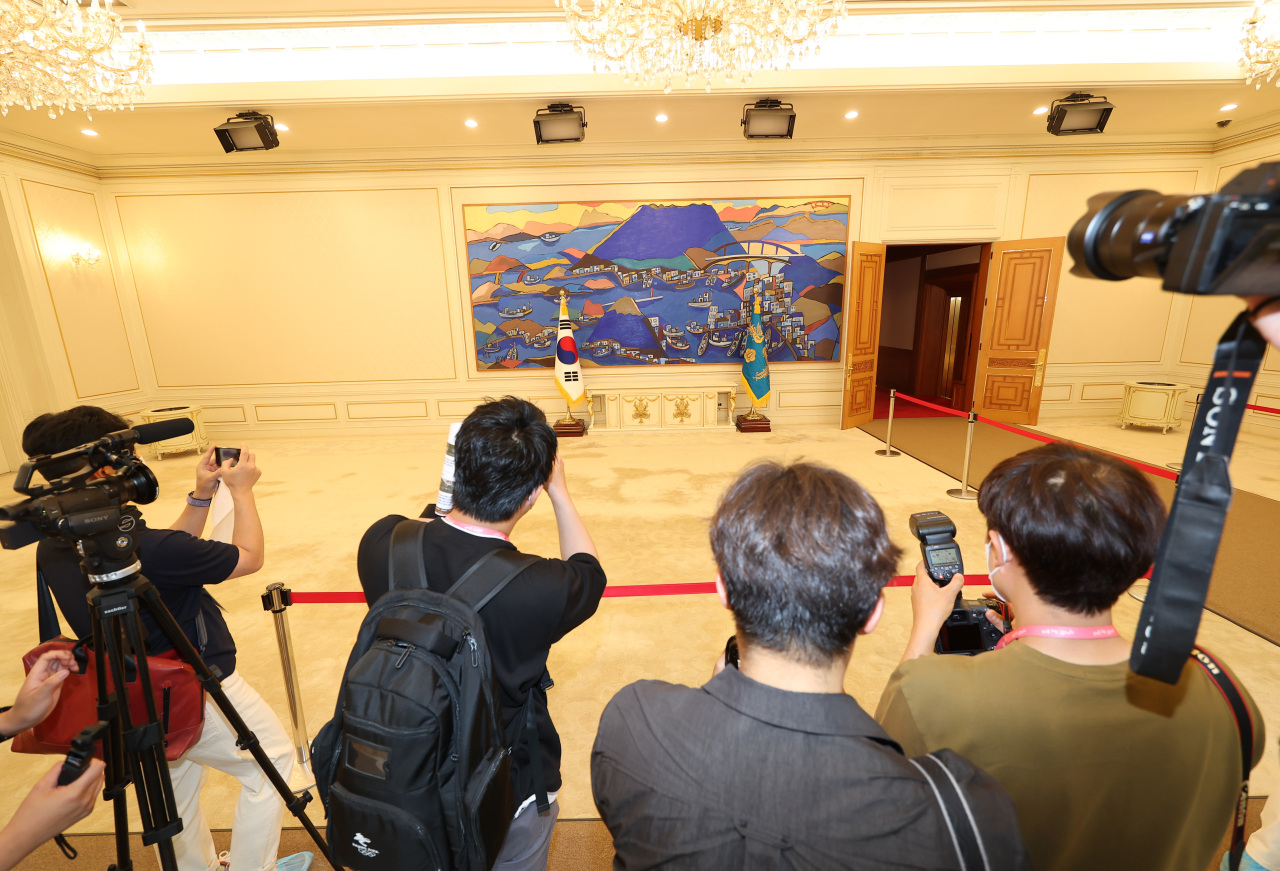 Reporters visit a room in Cheong Wa Dae on May 25 where Jeon Hyuk-lim’s “Port of Tongyeong” is on display. (Yonhap)
The government used to purchase works that were shown for “The National Art Exhibition of Korea,” a prestigious art contest held from 1949 to 1981. Presidents attended the opening ceremony of the art competition and the Blue House and other government organizations purchased works at the competition.

The Moon administration held an exhibition of art at the presidential office titled “Together: The Cheong Wa Dae Art Collection Open to the People” from May 9 to July 29, 2018. The exhibition encompassed works collected from 1966 to 2006 and was held at Cheong Wa Dae Sarangchae, a multipurpose exhibition hall that displays materials to promote the history of Korean government.