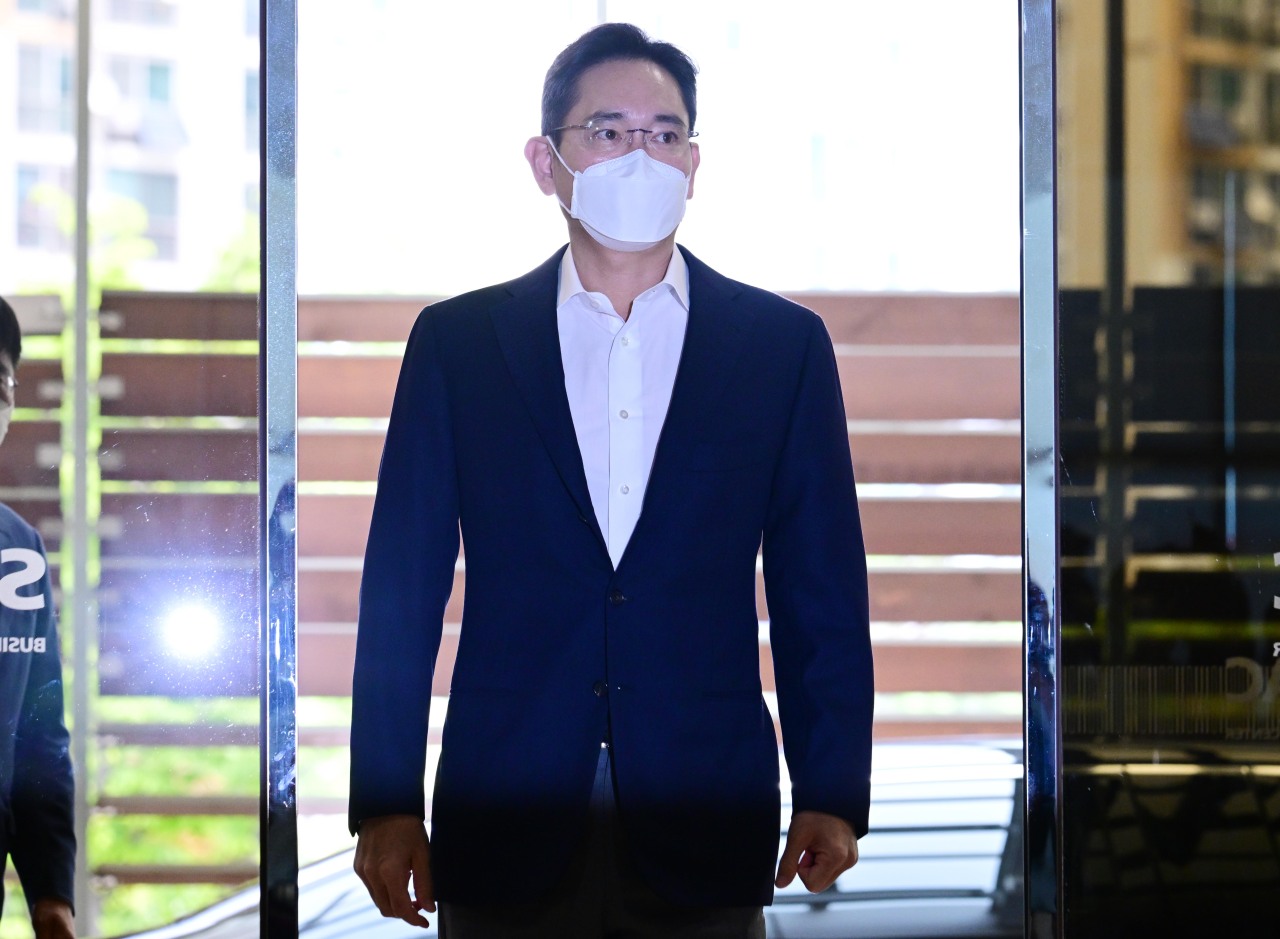 According to news reports Monday, the Samsung chief’s first stop of his two-week Europe trip that began last Tuesday was Germany. And he held a meeting with the BMW chief at the carmaker’s Munich headquarters.

The high-profile meeting comes, however, amid skepticism about the friendly partnership following BMW’s recent decision to add China’s CATL -- Samsung’s archrival -- to a list of its battery suppliers.

“BMW has continued diversifying battery suppliers. Its addition of CATL is nothing new for Samsung SDI,” said Lee Chang-min, an analyst at KB Securities.

But he declined to put too much emphasis on the meeting itself, calling it a usual business client meeting.

“The leaders are believed to have discussed future partnership, especially on the carmaker’s upcoming EV platform,” he added.

Samsung SDI is a battery partner for BMW’s new EV platform, called Nueve Klasse, which is scheduled to debut in 2025. BMW is also adopting autonomous driving features to the platform in partnership with US chip giant Qualcomm, raising the possibility that Samsung will join as the foundry chip maker.

Because Samsung SDI had already maintained a low profile in terms of huge investments compared to its global rivals, speculation was growing that Lee, Samsung’s de facto leader, may have lost his appetite for the battery business.

“Expectations were high when Lee appointed his right-hand man to lead Samsung SDI late last year,” said an industry official on condition of anonymity. “But months later, now there seems no clear sign of change in its strategy focusing on profitability rather than growth.” 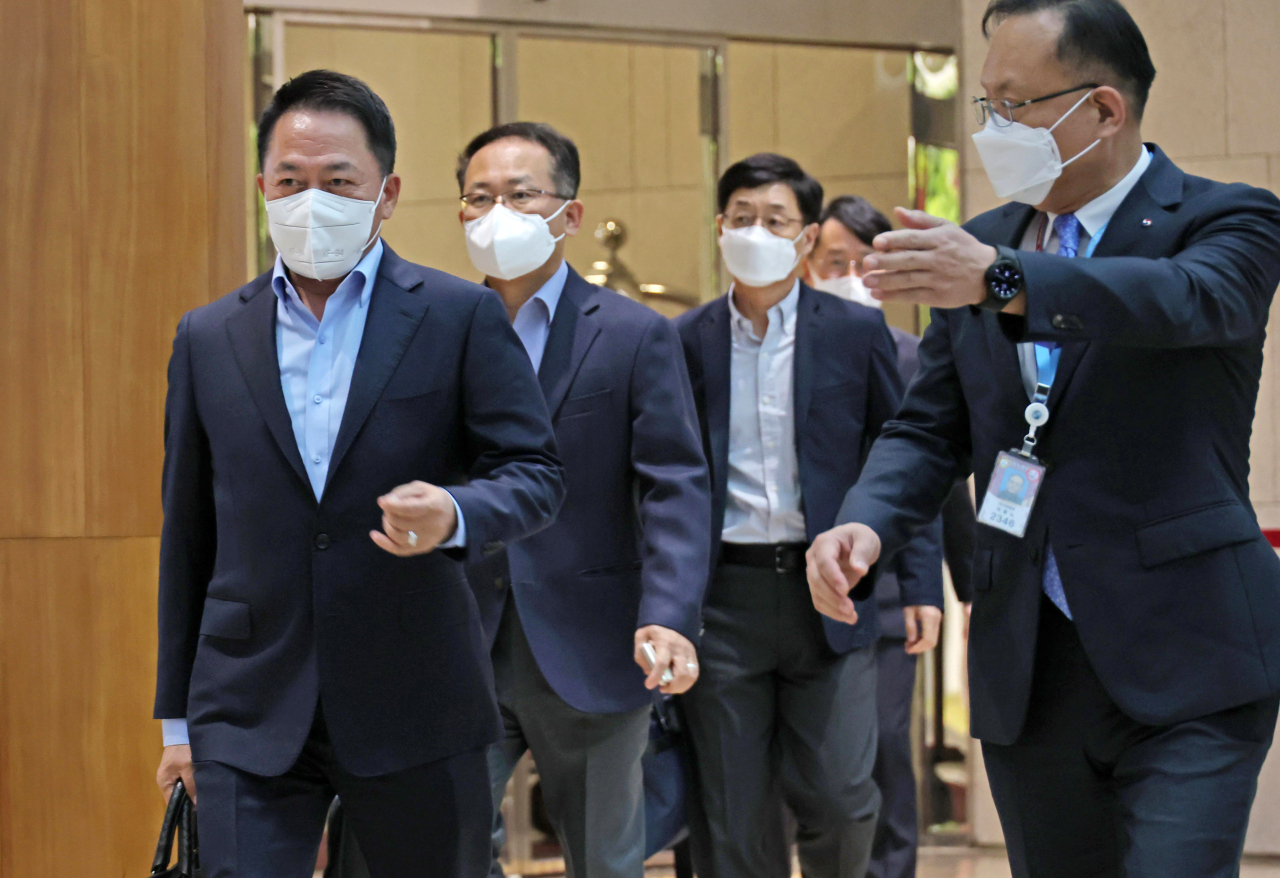 Samsung SDI CEO Choi Yoon-ho (left) arrives at Seoul`s Gimpo Airport to depart for a business trip to Europe on June 7. (Park Hae-mook/The Korea Herald)
When it comes to the all-important US market, Samsung’s crosstown rivals LG Energy Solution and SK On are spending big to elevate their annual manufacturing capacity to some 180-gigawatt hours by 2025, respectively, while Samsung SDI just recently announced plans to increase its capacity to 23 GWh in a joint venture with Stellantis.

“Samsung has always stressed its ‘Super Gap’ strategy to become a dominant player in key sectors. Skepticism may be growing about its battery business outpacing rivals amid fierce competition,” said another industry official who wished to be unnamed.

Adding skepticism to the market sentiment was a recent Citi Group report that downgraded Samsung SDI from “buy” to “sell.”

In the report, Peter Lee, the analyst, cited three downside risks: the prismatic-type battery’s deteriorating competitiveness, which is Samsung SDI’s core battery type, its declining market share and an escalating rivalry in the EV battery market.

Still, Samsung SDI is one of the top picks by local securities firms due to its higher profitability and the EV market’s overall growth potential.

Among the battery trio here, Samsung SDI was also the biggest spender in terms of research and development. According to their regulatory filings, Samsung SDI spent more than 7 percent of its sales on R&D last year, while the figures for LG Energy Solution and SK Innovation, the parent company of SK On, remained at 3.4 percent and 0.64 percent, respectively.

Amid the mixed outlook for the company’s growth potential, all eyes turned to Samsung SDI CEO Choi Yoon-ho when he appeared last week to take the same flight with Lee on his Europe trip.

Media reports say Choi and other Samsung SDI executives visited the company’s Hungary plant before joining Lee’s meeting with the BMW chief. While Lee is scheduled to travel other European countries, including the Netherlands and the UK, throughout this week, the Samsung SDI executives returned home on Saturday.

Despite its new US push, Europe remains the largest market for Samsung SDI, making up 4.88 trillion won in sales, about 36 percent of the total last year.