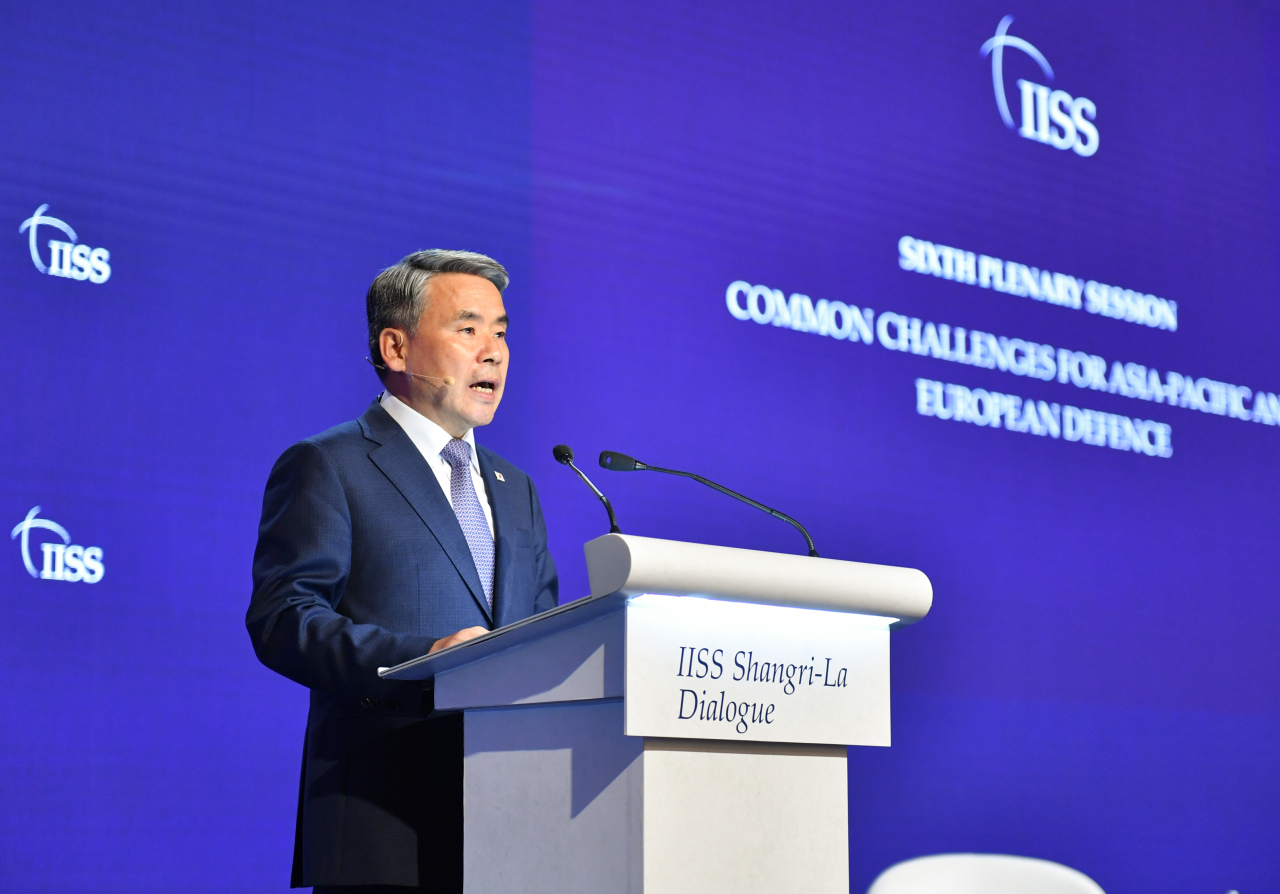 Lee set the direction and gist of the newly inaugurated Yoon Suk-yeol government’s approach to North Korea in his speech delivered at the International Institute for Strategic Studies’ 19th Asia Security Summit that ran from Friday to Sunday in Singapore.

In essence, the Yoon government will pursue a three-pronged approach to coping with North Korea’s missile and nuclear programs “from a position of strength.”

Yoon’s initiative to mend security ties with Japan
Lee said that South Korea will simultaneously seek to enhance the viability of the US extended deterrence and “drastically reinforce the response capabilities of the South Korean military to deter North Korea’s nuclear and missile threats.”

The Yoon government will also “strengthen trilateral security cooperation among South Korea, US and Japan to respond to North Korea’s nuclear and missile threats.”

Lee firmly stated that South Korea is willing to have an earnest discussion with Japan to restore security cooperation that has been halted due to historical, military and territorial disputes as well as other issues between the two countries.

“Although several bilateral issues remain unsolved between South Korea and Japan, we intend to have the two sides put their wisdom together to reach reasonable solutions in a way that reflects the shared interests of the two countries,” Lee said in his speech.

When asked about the range of the bilateral security cooperation, Lee clarified that it is within the scope of dealing with North Korean nuclear and missile threats.

Trilateral security coordination
The Yoon government’s initiative to mend bilateral ties with Japan was proposed a day after the South Korean, US and Japanese defense chiefs discussed ways to address North Korea’s escalating missile and nuclear threats in a coordinated and effective manner.

During this rare in-person meeting, the first since November 2019, the three defense chiefs noted the importance of reinforcing trilateral security coordination, it was announced in a joint press statement.

The three countries underscored the importance of resolving North Korean issues through trilateral channels, especially at a time when the UN Security Council has failed to take concerted actions because of opposition from China and Russia.

The three countries have staged the Pacific Dragon ballistic missile defense drills in Hawaii on the occasion of the US Navy-led Rim of the Pacific (RIMPAC) exercise as well as simulation-based missile warning exercises every three months.

But under the Moon Jae-in government, the trilateral exercises had been conducted low-key and irregularly, South Korean officials at the Defense Ministry said during a closed-door discussion following the meeting.

The decision mainly aims to “send an external signal” to North Korea which has heightened tensions on the Korean Peninsula, one of the officials said. 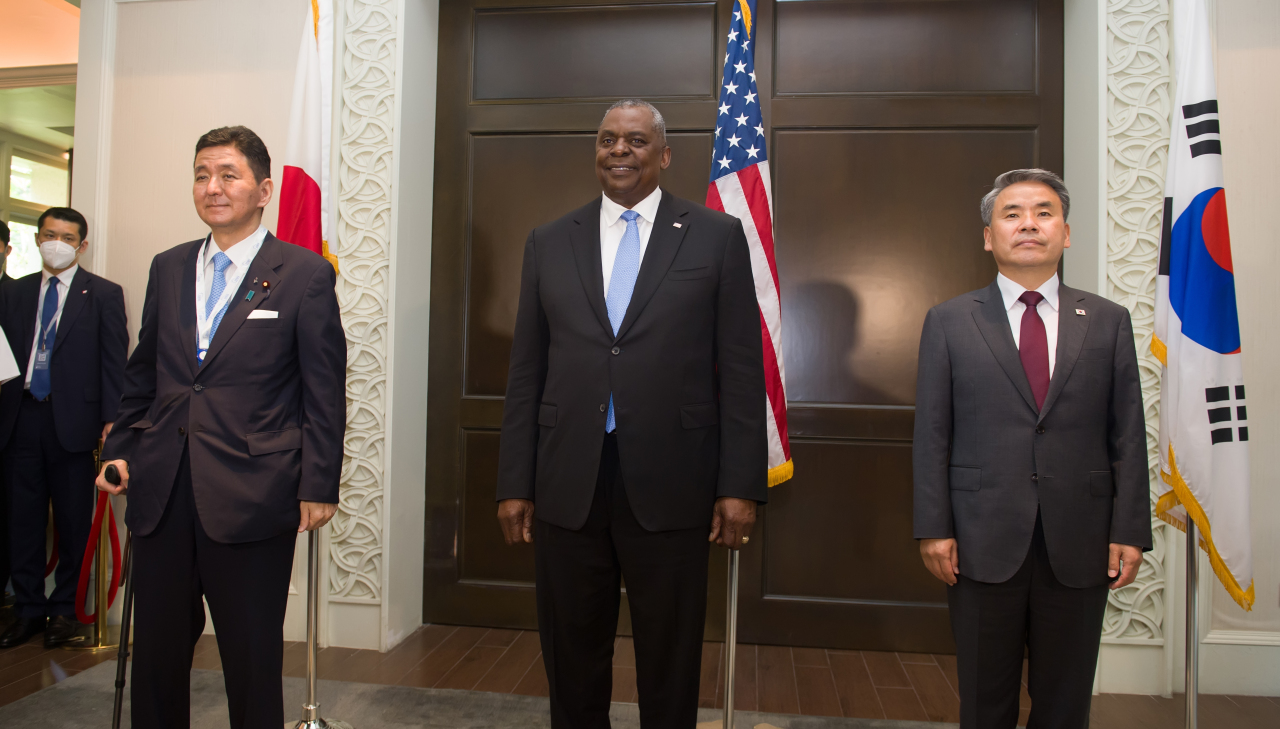 The options include trilateral exercises such as counter-terrorism exercises, Search and Rescue Exercises (SAREX) and anti-submarine warfare exercises that have been suspended in the wake of the military dispute between Seoul and Tokyo since 2018, according to the South Korean source. At the time, Japan accused a South Korean navy destroyer of directing its fire-control radar at a Japanese military surveillance aircraft.

But Seoul’s reluctance to conduct trilateral military exercises would limit the scope of a joint response to North Korean missiles and potential nuclear tests.

The absence of an attempt by South Korea and Japan to set up a bilateral defense minister meeting also clearly demonstrates this stark reality.

President Yoon Suk-yeol announced plans to formulate South Korea’s own Indo-Pacific strategy framework, which differs from the Moon Jae-in government’s New Southern Policy, at the South Korea-US summit on May 21.

In his speech, the South Korean defense minister said the Yoon government will expand cooperation with quadrilateral dialogue, better known as Quad, and other security consultative bodies in the Indo-Pacific region.

Lee explained that the security consultative bodies operate based on the principles of openness, transparency and inclusiveness, and the ultimate goal is to “faithfully implement rules-based international order in the Indo-Pacific region.”

The South Korean government will also actively expand security cooperation with the Association of Southeast Asian Nations (ASEAN) in various fields including non-traditional threats such as cyberattacks, terrorism and the arms industry.

In addition, South Korea will seek to forge a partnership with countries outside of the Indo-Pacific region, including European countries, both in traditional and non-traditional areas of security cooperation.

“Rather than ruling out a certain country, the Republic of Korea will seek to play a constructive role as a ‘global pivotal state’ so that we can unlock the greatest amount of security benefits for the greatest number of countries.”

The main foreign policy goal of the Yoon government is to make South Korea a “global pivotal state” that envisions the country’s heightened role in advancing freedom, peace, and prosperity across the Indo-Pacific region and beyond.

S.Korean position amid growing rivalry
Lee’s speech on the envisioned Indo-Pacific strategy came after he had separate meetings with his US and Chinese counterparts held on the margins of the Shangri-La Dialogue. But the bilateral talks show that South Korea is sitting in the crosshairs amid the growing strategic competition between the two countries.

China’s Minister of National Defense Wei Fenghe expressed its concerns about the Biden administration’s Indo-Pacific strategy and sought to contain the US during his meeting with Lee, the South Korean official with knowledge of the matter said during a closed-door briefing.

In similar remarks, Austin expressed his concerns that China’s efforts to change the status quo in the Indo-Pacific region have been intensifying and called for reinforcing the South Korea-US coordination to make China comply with the rules-based international order.

For the Yoon government, it is essential to enhance the viability of the US extended deterrence and the South Korea-US combined defense posture in coping with North Korean threats.

Against that backdrop, Austin and Lee on Saturday agreed to flesh out plans to expand the scope and scale of combined military exercises and training as the follow-up measures to the commitment made at the May 21 summit.

At the same time, the amicable relationship with China would be a strategic asset for South Korea in light of the US’ expectations to cooperate with China on the issue of North Korea.

Wei gave an affirmative response to Lee’s request to play a constructive role in resolving the North Korean nuclear issue during their bilateral talks on Friday, according to South Korea’s Defense Ministry.

Both sides confirmed that they share the goal of achieving complete denuclearization on the Korean Peninsula, but did not get to discuss concrete ways to address North Korean challenges.

The Shangri-La Dialogue crystallized the intricate regional dynamic compounded by the escalating conflict between the US and China and illustrated the need for the Yoon government to craft a calibrated Indo-Pacific strategy.

Austin on Saturday pledged to maintain the status quo in the Indo-Pacific region which he described as the “heart of American grand strategy,” while openly denouncing China’s “more coercive and aggressive approach to its territorial claims” in his keynote speech.

In return, Wei on Sunday hit back at Austin’s speech. The defense chief said China firmly rejects the “US smearing, accusations and even threats against China” in his remarks at Asia’s largest security summit.