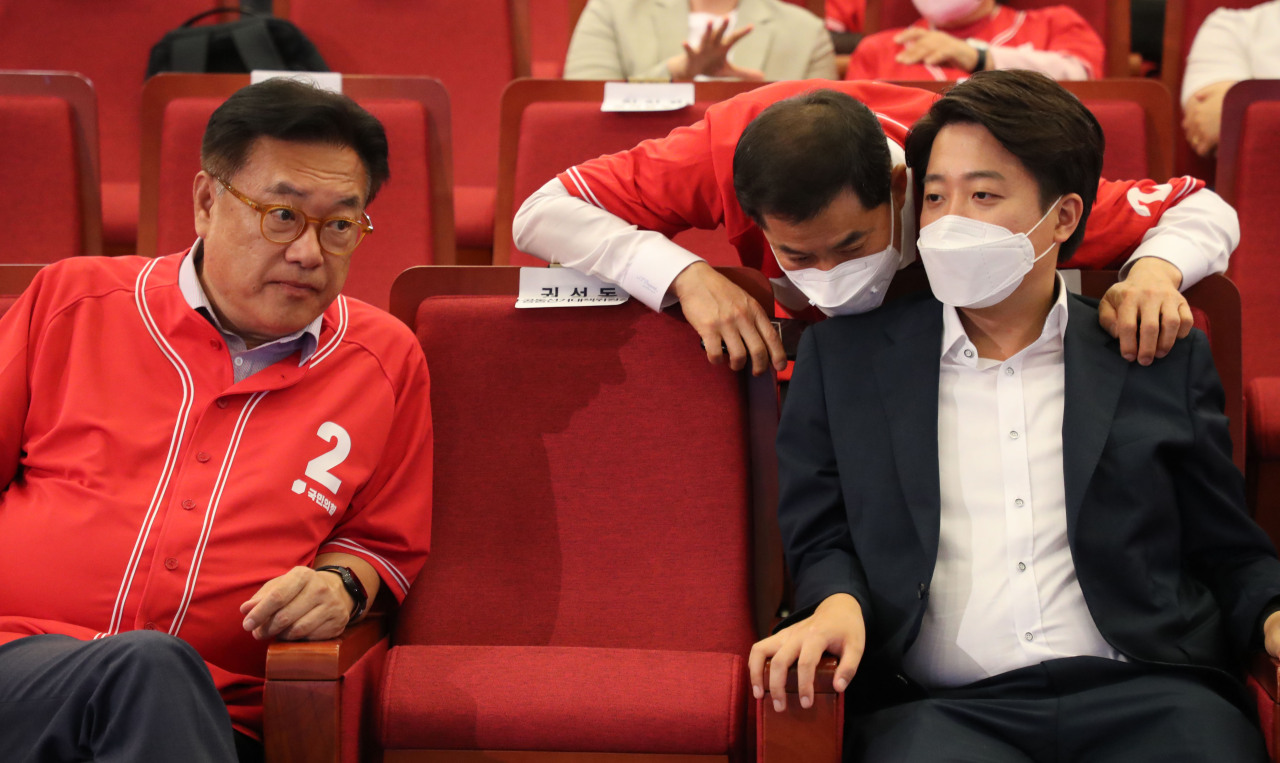 Rep. Chung Jin-suk (left) and People Power Party Chairman Lee Jun-seok (right) talk at the party`s situation room inside the National Assembly Library on June 1. (Joint Press Corps)
A feud is deepening within the ruling People Power Party over plans to overhaul the candidate nomination process ahead of the legislative elections in 2024.

Rep. Chung Jin-suk has been publicly resisting party chairman Lee Jun-seok’s move to install a special committee to reform the party’s nomination guidelines, and include figures close to him. Chung argues that Lee is trying to tilt nominations in his favor at the cost of the party’s long-term interests.

Highlighting that Lee is under review by the party’s ethics panel concerning sexual bribery allegations, Chung criticized Lee for traveling to Ukraine and creating internal conflict while serving as the chairman.

“There are many who question whether it is fair to talk of reforming nomination processes while allowing people to shop for nominations for elections,” Chung wrote in a Facebook post Monday.

“If Chairman Lee’s visit to Ukraine is nothing more or less than a move for his own political gains, this is not a problem that should be taken lightly.”

Lee rejected the accusations, saying he has abided by his principle of nominating only those who have passed the aptitude test he developed. The chairman added he also gave up the power of nomination to Chung for the local elections by letting him head the nomination committee.

The dispute has grown in recent days. Some have accused Chung of trying to undermine Lee, or even pressure him to step down before his term ends next year.

Chung, who has been touted as a likely candidate for chairman as he is close to President Yoon Suk-yeol, has rejected the speculation, and other leaders in the party have said Lee will complete his term.

The lawmaker was viewed early in the dispute as representing the collective opinion of Yoon’s close aides, but Rep. Kweon Seong-dong, the floor leader of the ruling party who also has close ties with Yoon, said Chung was only speaking for himself.

“Interpreting the criticism from party members as a power struggle is excessive,” Kweon said in a radio interview Thursday. “The party leadership is always at a position to be criticized as needed, and criticism from an individual should be seen and assessed comprehensively.”

Kweon said Chung’s criticism was “a comment coming from just one senior legislator in the party,” adding whether Lee was penalized by the ethics panel is unrelated to whether Lee would continue serving as the chairman.

The fight between Lee and Chung was expected to continue upon Lee’s return from Ukraine on Thursday afternoon, but many in the party have backed Lee in the dispute, even though some of them expressed the need to hear more opinions from party members before starting nomination reform.