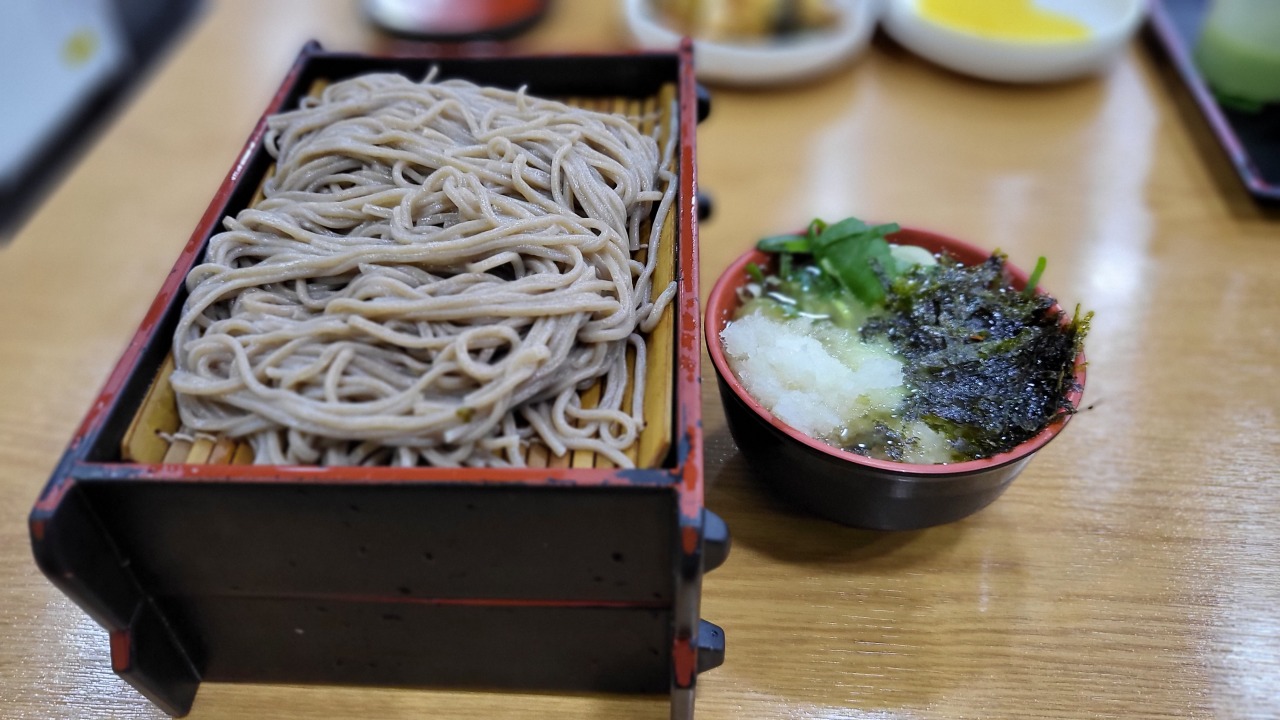 Memil guksu served at Mijin restaurant (Kim Hae-yeon/ The Korea Herald)
One of the summertime dining staples in Korea is buckwheat noodles.

Even when the scorching weather makes one easily lose their appetite, it is hard to resist the slurpable noodles that can be served either hot or cold.

Known for their unique grainy texture, buckwheat noodle lovers seek those that are made entirely out of buckwheat.

In Korea, such buckwheat noodles are recorded in the 17th-century cookbook “Eumsik dimibang.” The book defines buckwheat noodles as food shared by the hosts and guests after important rituals. It is also said that the noodles were regarded as a nutritious meal that drives away body heat, and therefore often served for lunch at the royal court.

The naturally gluten-free buckwheat contains abundant lysine, an essential amino acid which is missing in most plant-based vegan diets. It is also known to strengthen blood vessels and help improve cholesterol levels, according to multiple food nutrition studies.

As Korea’s memil guksu -- a type of buckwheat noodle dish in which the noodles and dipping broth are usually served separately -- has gained popularity, there has been much debate about its origins. A vast majority of reviews based on historical archives today seem to give much weight to speculations that it is a modified version of the Japanese soba, which supposedly landed in Korea during the Japanese colonization.

Apart from the memil guksu, Koreans have enjoyed buckwheat noodles in a variety of different ways since the Joseon era.

Buckwheat noodles can be anywhere from dark brown to white. The noodles become lighter in color through multiple peeling processes of the buckwheat outer shells.

A three-minute walk from Gwanghwamun Station Exit No. 4 is Mijin, a restaurant specializing in memil guksu since 1952.

In the summer, customers can be seen waiting in a long line to get a table at the restaurant that has been on the Michelin Guide’s Bib Gourmand list for five consecutive years since 2018. 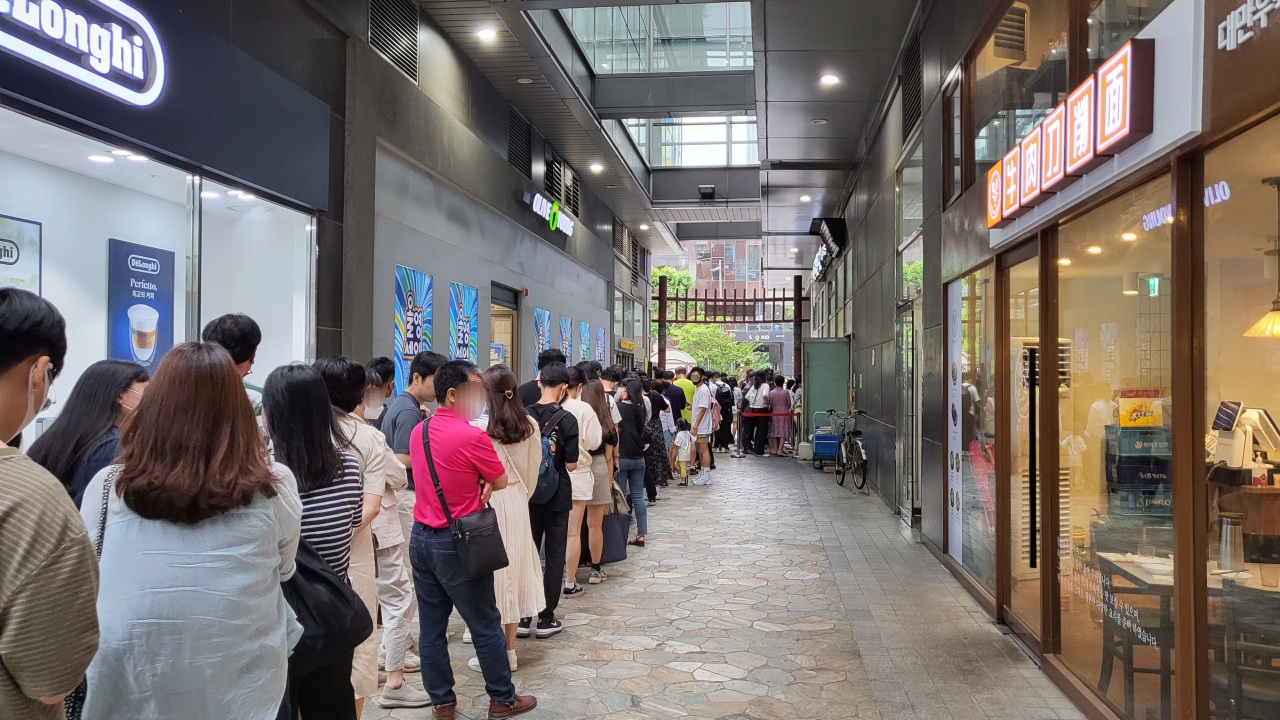 People wait in line at Mijin restaurant in the Gwanghwamun area on Sunday. (Kim Hae-yeon/ The Korea Herald)
Here, memil guksu can be either served cold, hot or mixed with a sauce. The cold memil guksu is Mijin’s signature dish.

Two stacked trays with noodles are served per person with a small kettle of chilled noodle broth and two side dishes.

The smell of the buckwheat noodle itself is earthy and tastes slightly bitter.

Once you dip the noodles into the broth, you will get a mix of bitter, sweet and spicy all at once.

The three types of memil guksu are priced at 10,000 won each. Those who want some meat with the noodles can order a small dish of bossam, boiled pork, for 14,000 won. 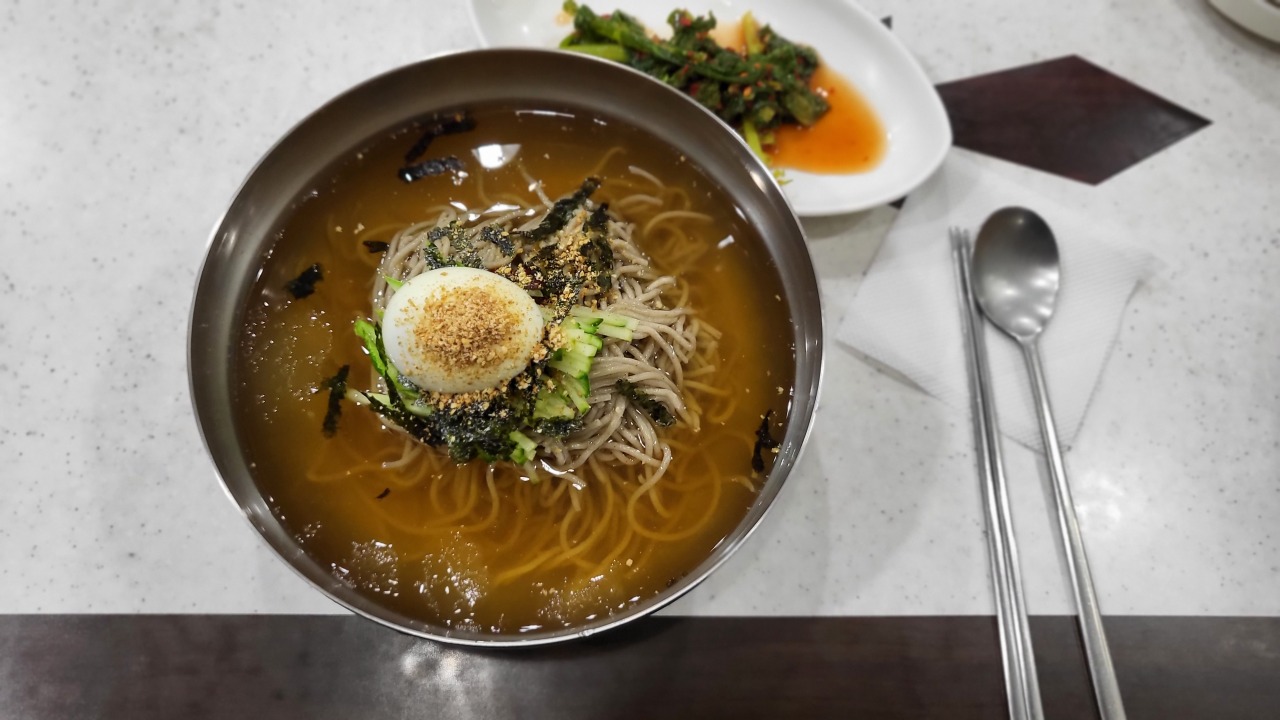 Some 50 meters from the main gate, you will easily find a brightly lit sign -- even during the early morning -- that reads “Pyeongchang Makgugksu,” along with several photos of TV shows that were filmed at the restaurant hung at the entrance.

Makguksu is a traditional Korean buckwheat noodle dish served in chilled broth. Depending on the chef, the broths have diverse flavors, from ones using dongchimi, Korean radish water kimchi, to beef and other vegetables. Ahyeon Market’s makguksu is unique in that a variety of vegetables and fruits are mixed together and pickled in light soy sauce. 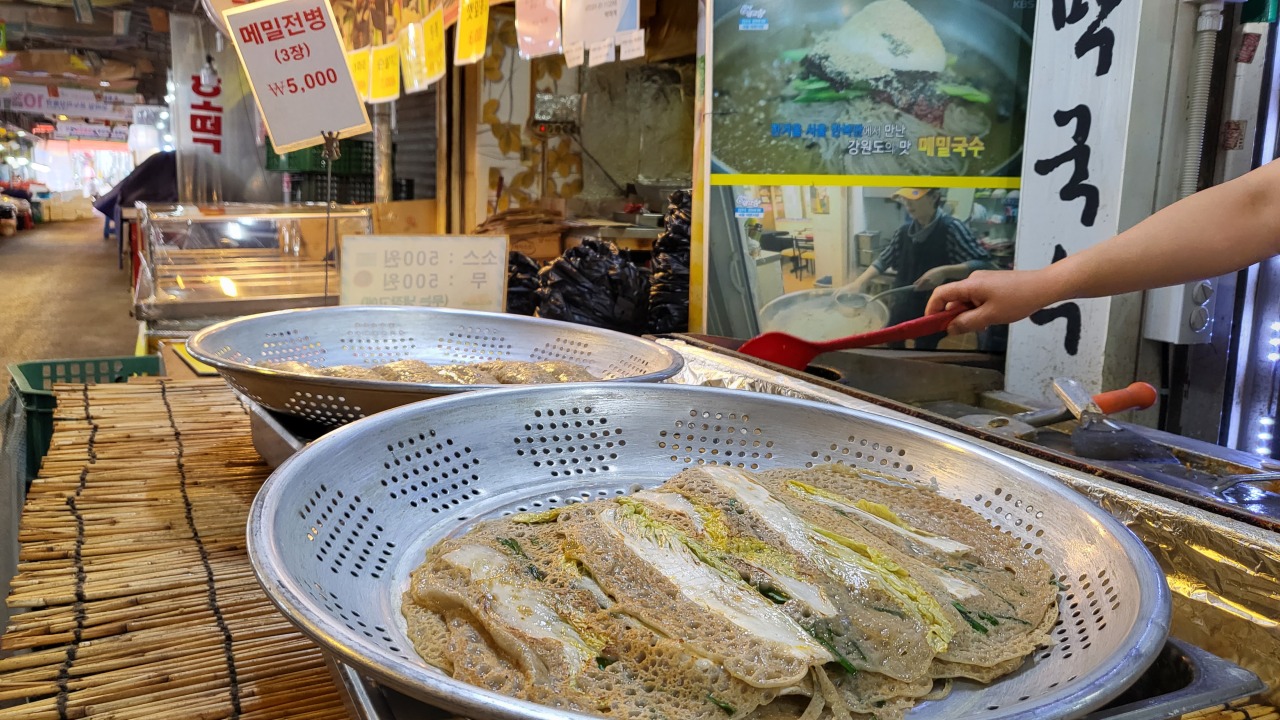 Memiljeon and memil jeonbyeong, buckwheat pancakes and rolls, served at Pyeongchang Makguksu (Kim Hae-yeon/ The Korea Herald)
“It takes 12 hours to make the broth, which is divided into six different steps,” Nam Jin-hee, the owner of the eatery, told The Korea Herald. Born and raised in Pyeongchang, Gangwon Province, a region known for its buckwheat, Nam learned to make makguksu at one of the most popular markets in Pyeongchang, and went through multiple trials and errors to add her own twist to the broth.

“I don’t use sugar at all, instead, my secret is pears,” Nam said.

The thin memiljeon, buckwheat pancakes, are also worth trying.

The pancakes can be rolled and stuffed with other fillings to turn it into memil jeonbyeong. Makguksu costs 7,000 won and a dish of memiljeon, 5,000 won. 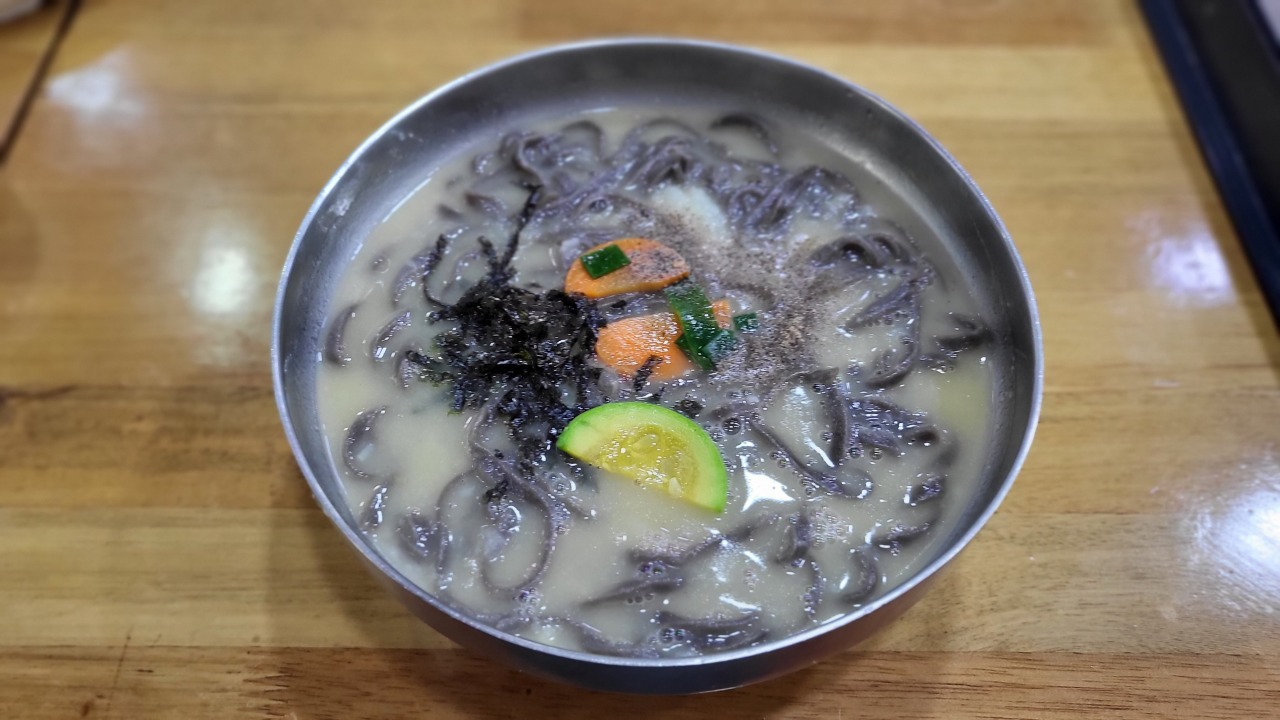 The place is named after Bongpyeong-myeon in Gangwon Province.

For those who are familiar with kalguksu, Korean knife-cut noodle soup, memil kalguksu is the buckwheat noodle version.

The restaurant serves buckwheat noodles that are darker in color, and therefore have a nuttier and more bitter taste compared to others. Also, you will find many customers enjoying them with spoons instead of chopsticks. The unrefined texture and roughly cut noodles indicate that they contain a high amount of buckwheat.

Seafood and vegetables, including potatoes, are used in making the broth, which has a very thick and milky texture. Perilla seeds and dried seaweed flakes top sliced carrot and green pumpkin garnishes, which add to the flavor while guaranteeing nutritional value.