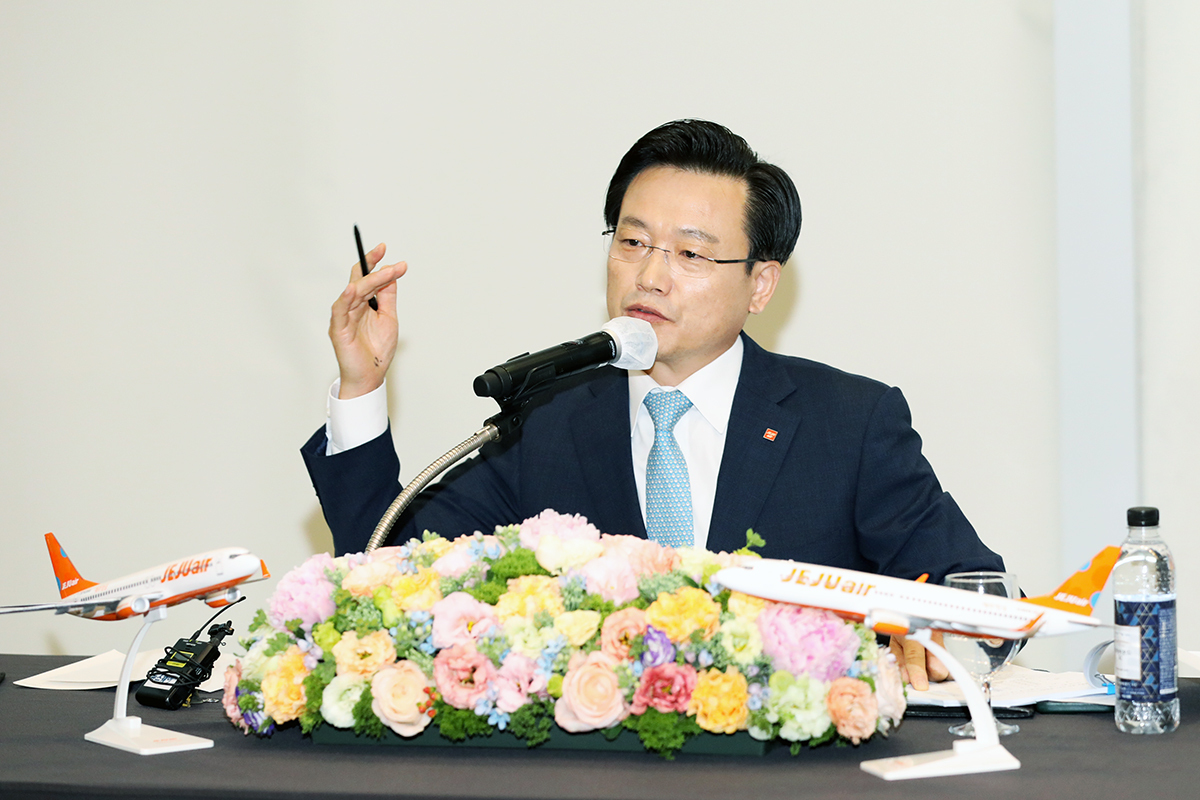 As both domestic and international travel demands are slowly picking up, Jeju Air CEO Kim E-bae said the company has come to a point where it should make a decision on how to maintain its leading role in the low-cost carrier market.

"As an LCC, our key competitiveness lies in being able to provide cheap flight tickets to our customers. Through cost-competitiveness improvement, we will be able to acquire sound finances,” Kim said in a press conference Tuesday. “It is as yet unclear what the future holds for the air industry this year. So we expect a profit turnaround next year at the earliest.”

The company’s decision to expand its market to cover midrange distances and to resume operating routes that were shut down due to COVID-19 is in line with its efforts to enhance competitiveness.

Jeju Air will be operating flights for 19 international routes, including from Incheon to Bangkok, Nha Trang in Vietnam, Bohol in the Philippines and Kota Kinabalu, Malaysia, for the month of July.

This is a 138 percent increase in flight routes from a month before, during which only eight international routes were being operated by the company’s aircraft.

"But we still need more open airways to Japan and China in order to achieve recovery to pre-pandemic levels. We expect most international routes to resume operation by the second half of next year,” he said.

The budget carrier has also been focusing on modernizing its fleet by bringing in new planes, such as the Boeing 737-8 aircraft.

Jeju Air previously sealed a deal to buy 40 Boeing 737-8s, which are to arrive in the country sometime next year.

Making the switch from the current Boeing 737-800 to 737-8 will increase its travel distance by 1,000 kilometers, fuel efficiency by 14 percent and flight operation fee per seat by 12 percent, which overall will bring greater profit for the company.

"We will also work on diversifying our business by increasing express cargo flights and preparing for the operation of urban air mobility,” Kim added.

Currently, Jeju Air relies on the passenger transport business for around 97 percent of its profit.

Starting this month, Jeju Air will implement its cargo transportation business with a cargo flight.

As for the urban air mobility business, an official from Jeju Air in charge of the sector said the company plans to use its expertise in safe and reliable flight operation service with the help of its aviation professionals and flight-related systems.