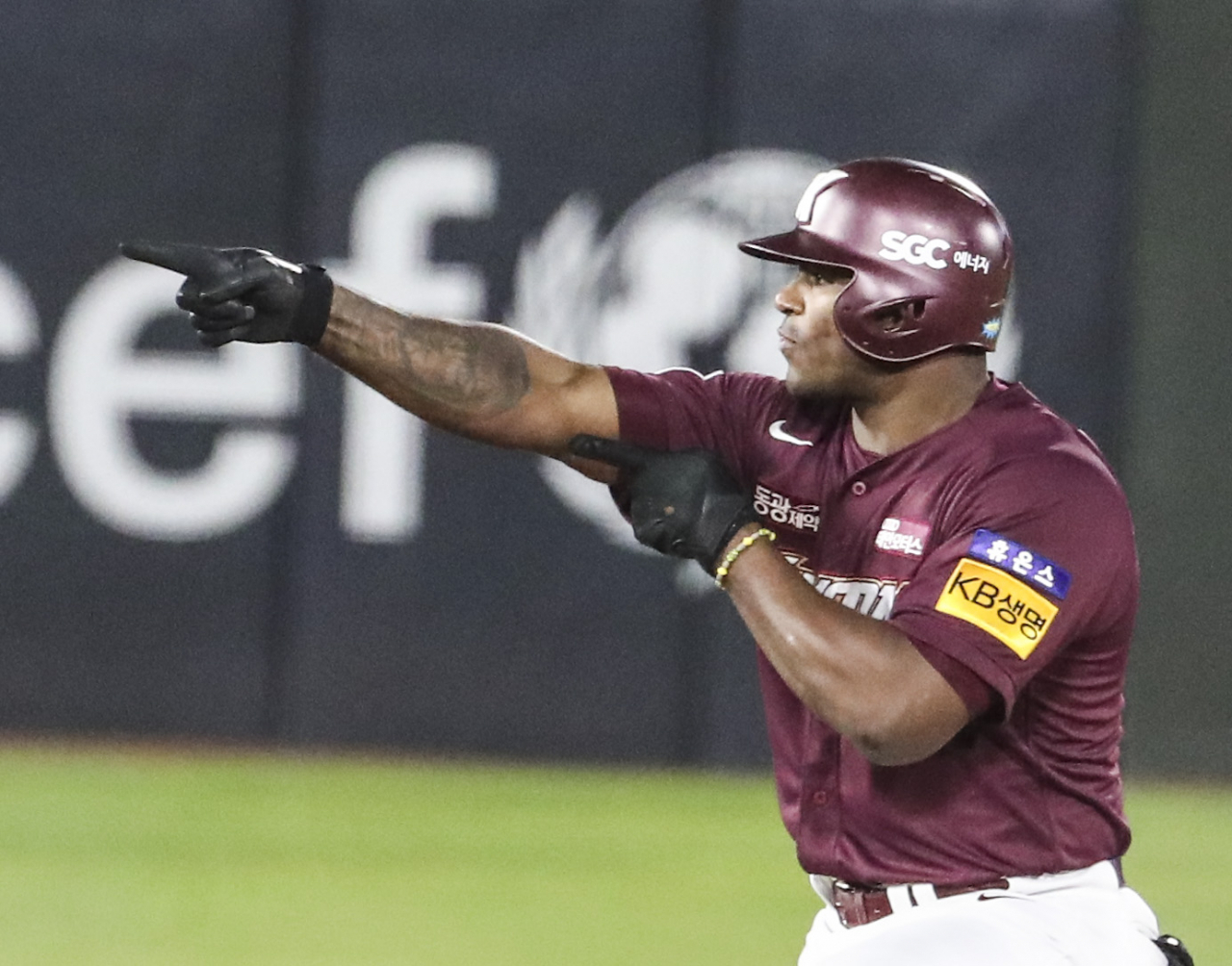 In this file photo from May 27, 2022, Yasiel Puig of the Kiwoom Heroes celebrates an RBI double against the Lotte Giants during the top of the seventh inning of a Korea Baseball Organization regular season game at Sajik Stadium in Busan, 325 kilometers southeast of Seoul. (Yonhap)

With their prized offseason acquisition heating up heading into summer, the Kiwoom Heroes are closing in on first place in South Korean baseball.

Yasiel Puig, the former National League All-Star and the biggest name to arrive in the Korea Baseball Organization (KBO) in the offseason, has finally begun to look like the hitter that the Heroes had envisioned he would be when they gave him a US$1 million contract in December.

For the season, Puig is still stuck at .230/.325/.392. But he is back in the cleanup spot, after spending most of May either as No. 2 or as No. 8 hitter. The Heroes, with their middle-of-the-pack offense, don't have the luxury of putting a power threat like Puig that far down in the lineup.

The Heroes (33-22) now sit 3.5 games behind first-place SSG Landers, and they will open the new week with a three-game home series against the KT Wiz, winners of three straight, starting Tuesday at Gocheok Sky Dome in Seoul.

The Wiz are trying to make some noise after a dismal start to their title defense. At 25-29-1 (wins-losses-ties), the Wiz are now just one game back of the Samsung Lions for fifth.

The Wiz welcomed back slugger Kang Baek-ho from a toe injury last Saturday. He went 0-for-9 in his first two games, though.

The two clubs right behind the Heroes, the LG Twins and the Kia Tigers, will clash for three games at Tigers' home in Gwangju, some 270 kilometers south of Seoul, starting Tuesday.

The Twins hold a half-game lead over the Tigers, while trailing the Heroes by two games. The Tigers, despite losing two of the past three and tying the other, have opened up a four-game lead on the Lions.

The Twins have won four of the first five meetings this season against the Tigers, and they'll have their top three starters lined up for this series.

Adam Plutko, who didn't allow a run in 12 innings across two starts against the Tigers, will take the ball for the series opener Tuesday. Lee Min-ho, who beat the Tigers on April 3 at the start of the season and has a 2.08 ERA against them this year, will follow Wednesday. Then Casey Kelly will make his first appearance against the Tigers this year on Thursday. Since making his KBO debut in 2019, Kelly has gone 8-1 against the Tigers with a 2.65 ERA.

The Landers visit last-place NC Dinos for three games in midweek and then come home to host the Hanwha Eagles, second-to-last in the standings, for the weekend. (Yonhap)