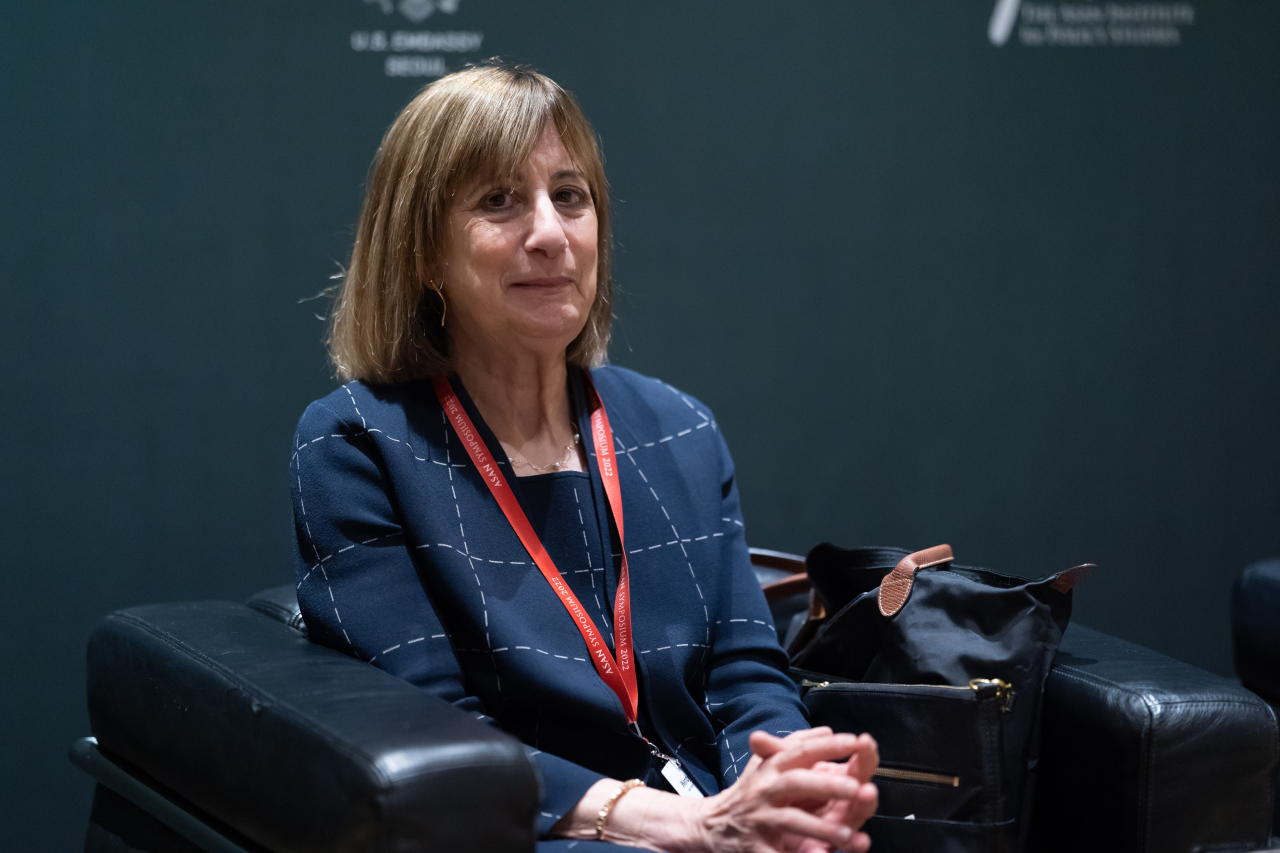 Wendy Cutler, former acting deputy US trade representative and currently vice president of the Asia Society Policy Institute, speaks in a joint media interview during the Asan Symposium, co-hosted by the Asan Institute for Policy Studies and the US Embassy in Seoul on Friday. (Asan Institute for Policy Studies)
The United States’ latest Indo-Pacific Economic Framework is not pushing participants to choose between the United States and China, former US Trade Representative negotiator Wendy Cutler said on Friday at a symposium in Seoul.

Cutler, however, said that the countries should “reduce dependence on any one source or inputs for their supply chains” in case of economic coercion.

Speaking at the Asan Symposium, co-hosted by Asan Institute for Policy Studies and the US Embassy in Seoul, Cutler rejected concerns that the US-led economic initiative IPEF is a tool for the US to expand its presence in the Indo-Pacific region to keep its strategic rival China in check.

“If you look at the IPEF launch document, you don’t see the word ‘China’ in there at all. Again, it’s an affirmative, positive vision of the types of the initiatives the US likes to pursue with other like-minded countries in the region,” said Cutler, who is now vice president of the Asia Society Policy Institute.

In fact, many IPEF participants have welcomed stepping up US engagement in the region, as some countries, including South Korea, are concerned about becoming too dependent on China, Cutler said.

There is an interest in diversifying sourcing and diversifying investment destinations and making supply chains more resilient and less susceptible to climate change, the pandemic and geopolitical developments, she added.

Last month, South Korea joined the economic initiative as a founding member, along with 12 other countries, including Japan and Singapore.

According to Cutler, the IPEF would provide the opportunity for the US to be engaged in the region, as the country has been seen to lack a major trade and economic grouping since former US President Donald Trump withdrew the US from the proposed 12-nation Trans-Pacific Partnership in 2017.

Over concerns in South Korea that China may take retaliatory actions against it for joining the US-led initiative, Cutler said the US would work closely to come up with responses to handle economic coercions.

China, South Korea’s biggest trading partner, has been hostile against the IPEF, saying it is “doomed to fail,” and warned Seoul of possible “decoupling.”

“The issue of economic coercion would be of great concern to the Biden administration, and they are working with allies and partners that are either targeted for coercion or those already experiencing it, to develop responses,” Cutler said.

“Part of that is to make countries less dependent on any one source or inputs for their supply chains. So I think over time, you are going to hear more about collective efforts to address economic coercions.”

Cutler explained that the participating members are now working together in a “scoping exercise,” where they would define the details in the topics that will be discussed under the four pillars of the IPEF, and said it is still premature to make a judgment on the initiative.

“All participants including Korea will express their priorities, their concerns and work with the US and others to shape this initiative (in the scoping exercise),” Cutler said.

While questions remain as to the benefits of joining the IPEF focused on “rule-making,” Culter said it would be able to offer “concrete benefits” to trading partners.

“I believe the administration will offer capacity-building efforts, they will be providing some financing in public and private partnerships particularly when it comes to clean energy issues. I also expect that in some areas for trade facilitation, there will be concrete benefits that will be offered to our trading partners,” Cutler said, urging participants and potential partners to “keep an open mind.”

“Traditionally in economic agreements and trade agreements, the US has used market access as a carrot for other countries to agree to things that they may not be so enthusiastic about doing,” Cutler said.

“But I think we are getting into a new world now and we need to think more broadly than just tariff cuts as being the benefits of initiatives like IPEF.”