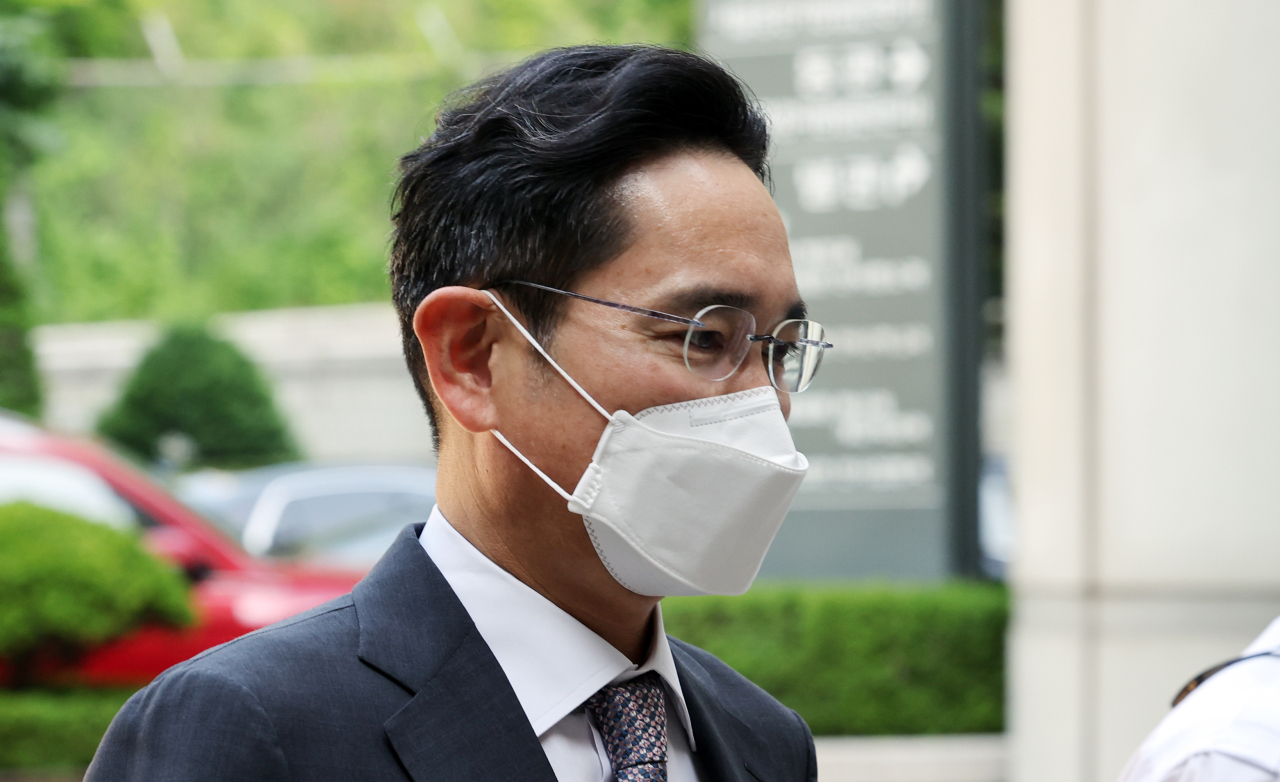 Samsung Electronics Vice Chairman and de facto leader Lee Jae-yong is seen attending a trial over his alleged role in a 2015 merger between Samsung C&T and Cheil Industries on May 26. (Yonhap)
Samsung Electronics Vice Chairman Lee Jae-yong is poised to embark on a two-week trip to Europe on Tuesday, highlighting the South Korean chip-to-consumer electronics giant’s need for a breakthrough.

Also under the spotlight is whether the largest conglomerate in Korea would be looking to secure a new growth driver in Europe, coupled with Samsung‘s fresh investment pledge announced earlier in May.

The Seoul Central District Court on Thursday approved Lee’s absence from the trial over his alleged intervention in the controversial merger in 2015 between Samsung Group‘s key affiliates for the next two weeks, as his legal representatives said his “trip to the Netherlands” from Tuesday until June 18 was “scheduled urgently.”

Local media reports speculate that Lee would hold talks with representatives of companies in the Netherlands such as semiconductor photolithography system provider ASML.

This will be Lee’s first official visit to the Netherlands in two years since his meeting there with ASML CEO Peter Wennink in October 2020.

The news comes two weeks after Samsung on May 24 unveiled a groupwide plan to spend a combined 450 trillion won ($360 billion) in the next five years, mainly in the fields of semiconductor chips, health care, 6G communication technology and artificial intelligence.

“The number doesn‘t count, but (we) are to make life-and-death decisions for our investment,” Lee told reporters on May 26 in Seoul during an event presided over by President Yoon Suk-yeol regarding the investment.

Also on May 30, Lee held talks with Intel CEO Pat Gelsinger in Samsung’s Seoul office over a possible collaboration in their respective semiconductor businesses.

Samsung Electronics has been largely under pressure and is in search of a breakthrough. The memory chip industry is facing challenges in terms of the scaling of both DRAM chips and NAND flash memory chips. Its newest flagship Galaxy S smartphones exposed the challenges of mobile technological breakthroughs in the wake of the benchmark-rigging scandal, noted NH Investment & Securities analyst Do Hyun-woo in May.

Business circles here have also claimed that Lee‘s restricted role in Samsung’s management since his release from prison on parole in August hampers the growth momentum of the tech giant. They are calling for Lee to be pardoned from his bribery conviction during ex-President Park Geun-hye‘s term.

Samsung Electronics has remained silent in the mergers and acquisitions scene after its $8 billion acquisition of Harman International was closed in January 2017, just before Lee was indicted over an influence-peddling scandal that toppled Park.