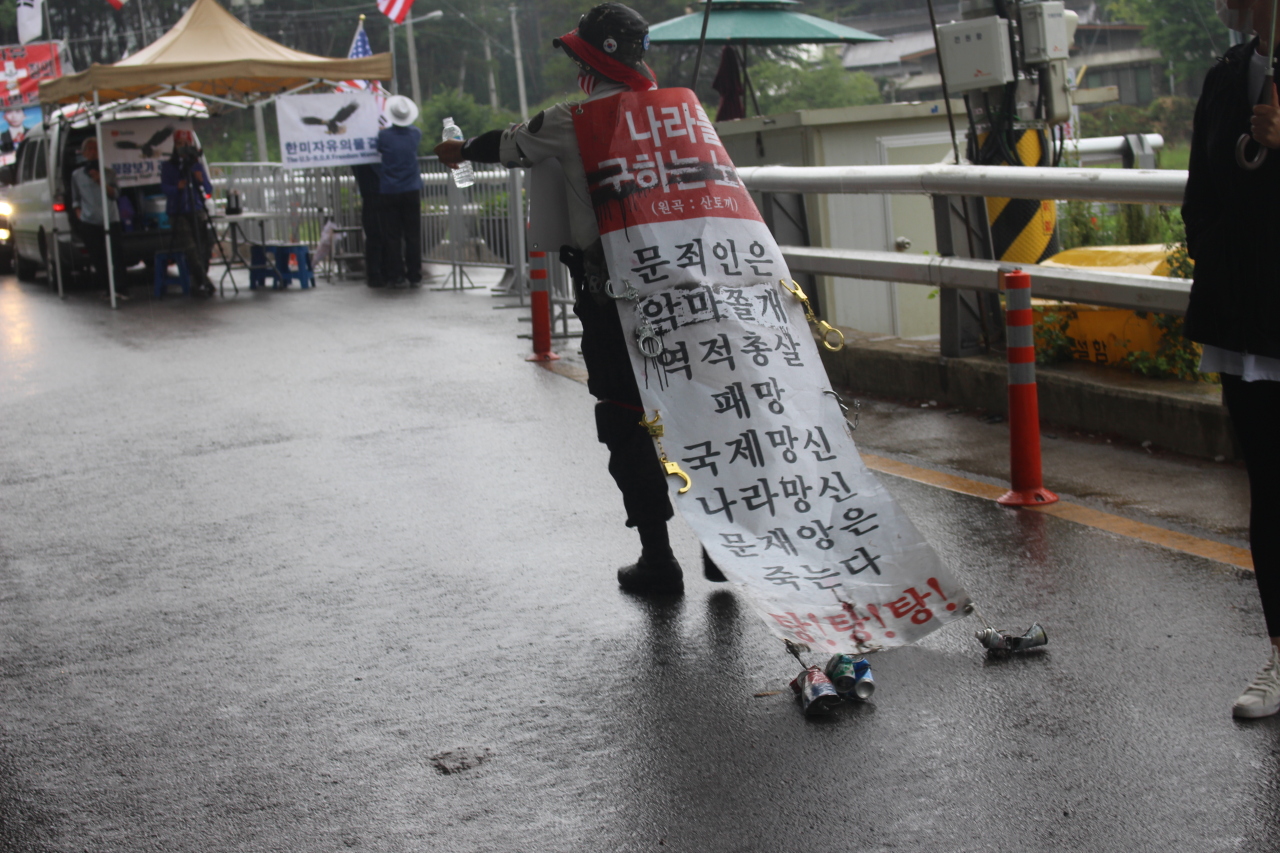 “My protest is for Moon to receive legal punishment for the crimes he committed, and be expelled from Yangsan,” said Choi Young-il, a Seoul resident and member of the group calling itself the Freedom-Justice-Truth-Revolution Party.

A month had passed after Moon had stepped down as president of South Korea, but the series of protests at his Yangsan home had persisted throughout. The narrow road near the Pyeongsan town hall has become ground zero for conflicts surrounding the former president.

The protesters vary in terms of group size, style or messages, but they all had a clear purpose: to make Moon pay for his supposed “crimes” while broadcasting on various internet streaming platforms.

Dozens of plastic handcuffs and black balloons were hung on the barbed wired fences opposite Moon‘s home, which were deflated as of Sunday morning. Kim Gi-hwan, the man responsible for the exhibition, said the balloons represent the public’s inflamed anger against Moon. 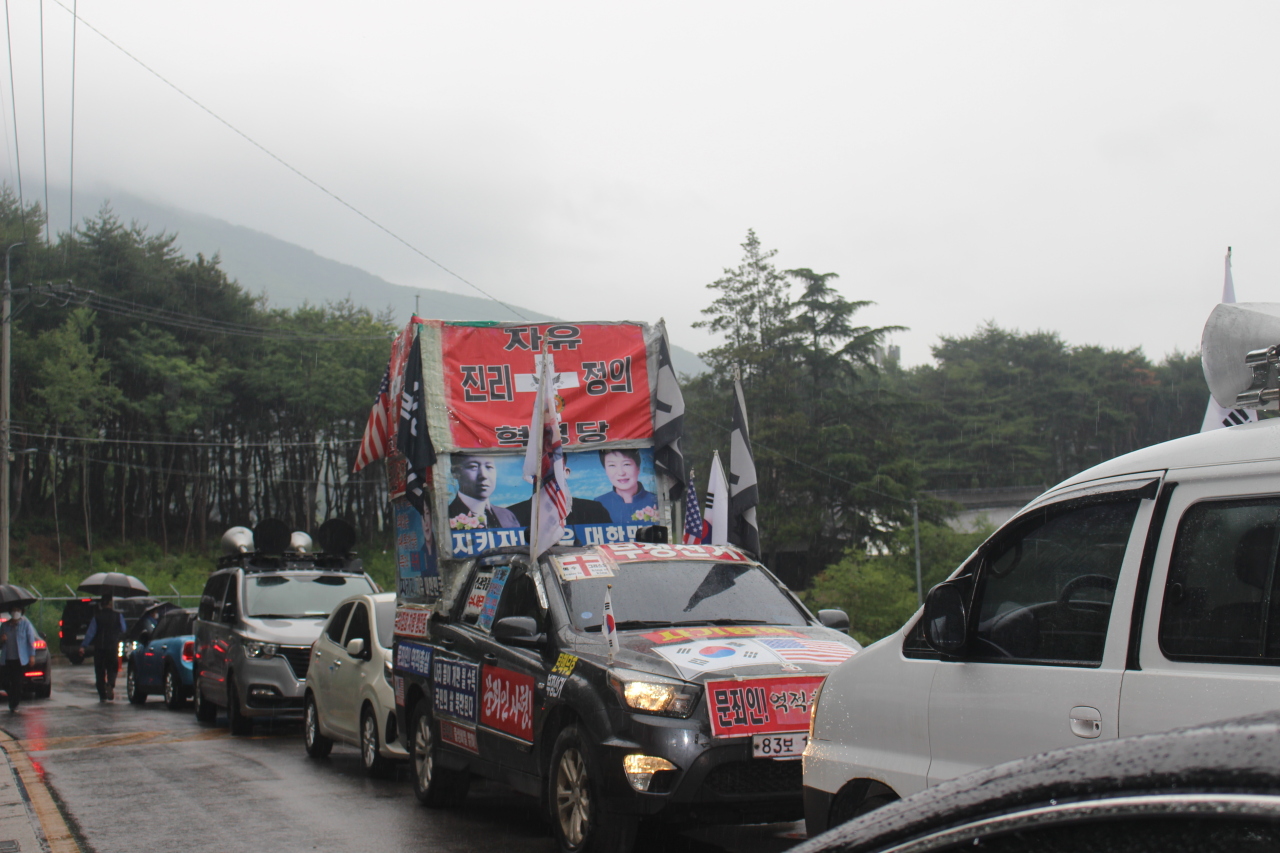 Cars brought by those protesting against ex-President Moon Jae-in are parked outside of Moon’s home in Yangsan, South Gyeongsang Province, Sunday. (Yoon Min-sik/The Korea Herald)
“The members (of my protest group) and I insist that Moon comment on the allegations surrounding him -- such as the one about (Moon’s wife) Kim Jung-sook using (the former presidential office) Cheong Wa Dae‘s special activity expenses -- and be arrested,” Kim said, referring to rumors that the former first lady used the said funds to buy clothes and accessories for herself.

The validity of the claims has yet to be determined by the law, but some accuse Moon of overall misconduct in his state management during his time in office. Park Yun-ki, a man leading a group calling itself the US-ROK Freedom Waves, claimed that the Moon administration “dismantled the alliance between South Korea and the US.” ROK refers to South Korea’s official name, the Republic of Korea.

Perhaps due to rain, the protest on Sunday morning was a relatively small one. The number of protesters hovered around a few dozen compared to previous protests, according to local police officers dispatched to the scene. Although Sunday’s protests may have been smaller in size, they were hardly any tamer.

Shortly before noon, a protester started harassing two female visitors, who he accused of being “sent by Moon.” The man had previously claimed that Moon had sent dozens of his followers to disrupt the protests, saying his group refused to talk with the village leaders because he suspected the local office to be working under Moon’s orders. 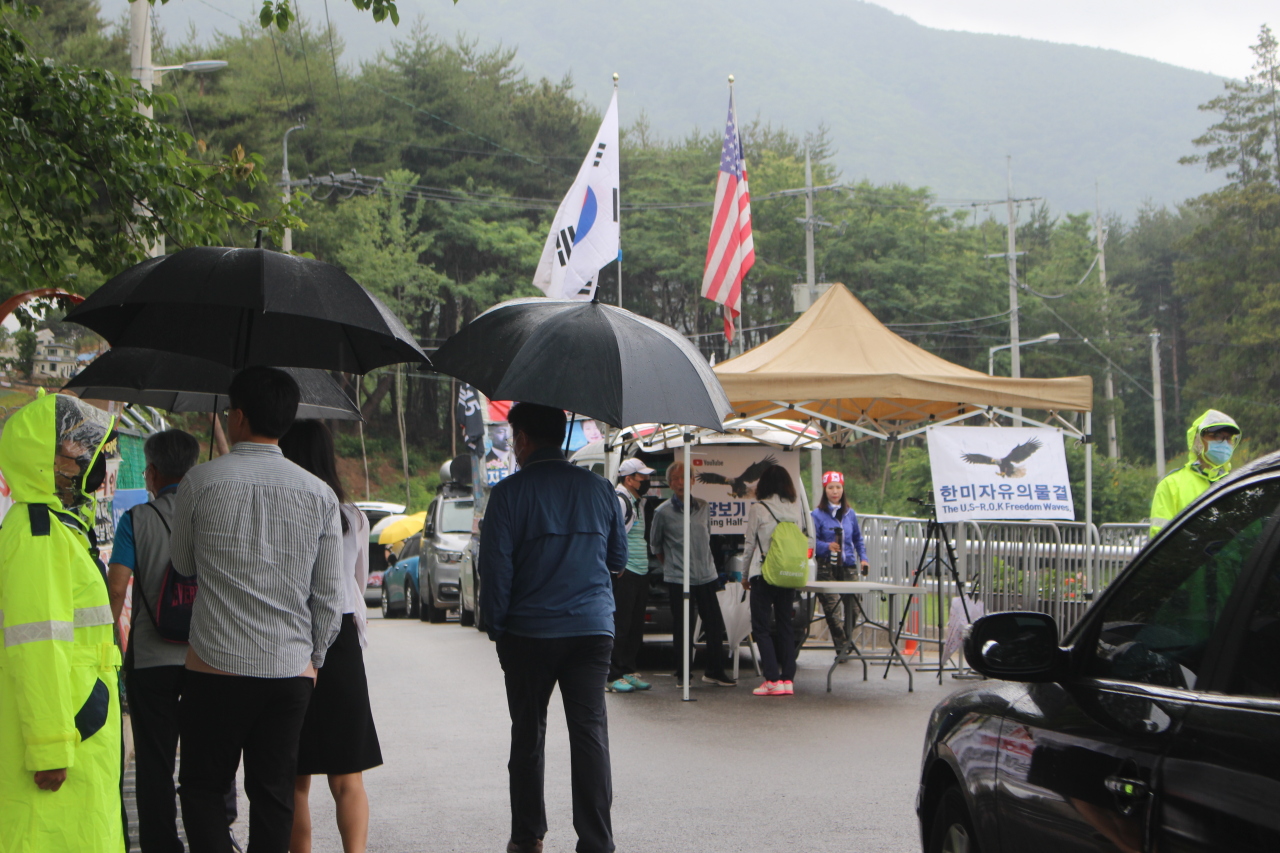 Protesters and bystanders are seen prior to a demonstration against ex-President Moon Jae-in outside of his home in Yangsan, South Gyeongsang Province, Sunday. (Yoon Min-sik/The Korea Herald)
Last week, Moon‘s family filed charges against four individuals from three protest groups to the police, on charges of defamation by alleging false facts, threat of murder and arson, and in violation of the Article 5 of the Assembly and Demonstration Act which bans an assembly or demonstration that clearly poses a direct threat to public peace and order by inciting collective violence.

One of the visitors who were harassed by the male protestor was a woman in her 40s who only wished to be identified by the surname Kim from Jeju Island. She said the protestor started shouting profanities at her and her friend for “standing in (the male protestor’s) spot.”

“I think these kind of protests are nonsense. If they (the protesters) have some problem with Moon, they should state what the problem rationally and take actions accordingly, not just shout profanities. Even considering freedom of speech, I think they are going too far,” she said.

Another woman who was there when the altercation occurred said the male protestor also attacked Kim for holding a yellow umbrella, which became a symbolic color for Moon and liberals who protested the handling of the 2014 Sewol tragedy by the conservative administration under ex-President Park Geun-hye. But this testimony was not verified, as the protester was not in a talkative mood afterwards, going around shouting profanities while wearing a banner that urged Moon’s punishment like a cape.

“I was here yesterday for an hour and it already gave me a headache. Just imagine what the locals are going through,” she said. 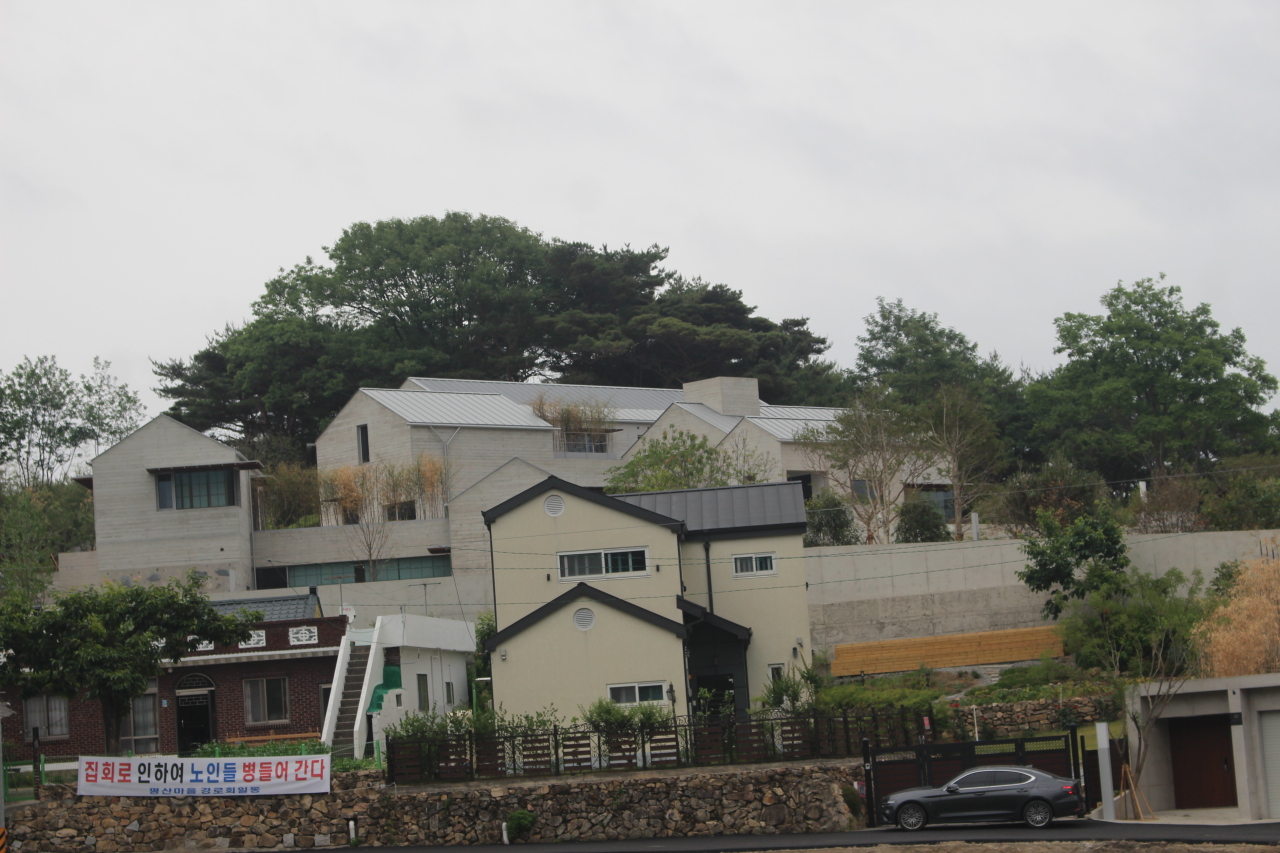 Ex-President Moon Jae-in’s home is seen behind the homes of local residents in Yangsan, South Gyeongsang Province, Sunday. (Yoon Min-sik/The Korea Herald)
The accusation that Moon sent two middle-aged women who would not fight back in any way upon provocation as his foot soldiers has not been confirmed.

Some protesters claimed that Moon is “reaping what he sowed” for allowing protests against former Presidents Lee Myung-bak and Park Geun-hye. “He (Moon) turned a blind eye to the protests on Lee and Park in the name of freedom of speech. To file charges (on protestors) now is hypocrisy,” said a female protestor.

Lee and Park were both convicted of corruption, with Park recently being released via presidential pardon and Lee still serving his 17-year prison term. There have not been any charges filed against Moon, as of now.

The female protester also claimed that complaints about locals being inconvenienced was “greatly exaggerated,” as the protests affected only a few homes. “You can’t even hear anything at the Pyeongsan town hall,” she said.

Contrary to this claim, the sound blasting from the loudspeakers were audible from Pyeongsan town hall. The protesters deemed “Gangnam Style” the tune best equipped to make Moon and his family as miserable as possible.

A banner saying “Ensure the Pyeongsan locals’ right to survive” hung at the town hall. It was reported last week that over 700 complaints were filed to the South Gyeongsang provincial government. But The Korea Herald was unable to get a comment from the locals, as a handful of locals who passed the spot on Sunday refused to talk to the media.

Most of the non-protesters at the scene were outsiders there to check out the situation. A couple from Busan raised questions about the protests themselves.

A woman surnamed Lee, 60, said they were merely a plea for attention in search of YouTube views. “There is no political ideology or purpose to these (protests). They are but a means to make some money on YouTube,” she said. “Come back a year later. I think these protests will have perished by then, when they no longer attract attention.”

The validity of her claims aside, all but one of the groups present at the scene on Sunday were broadcasting their activities on an internet platform, with at least three groups confirmed to be running an active YouTube channel.