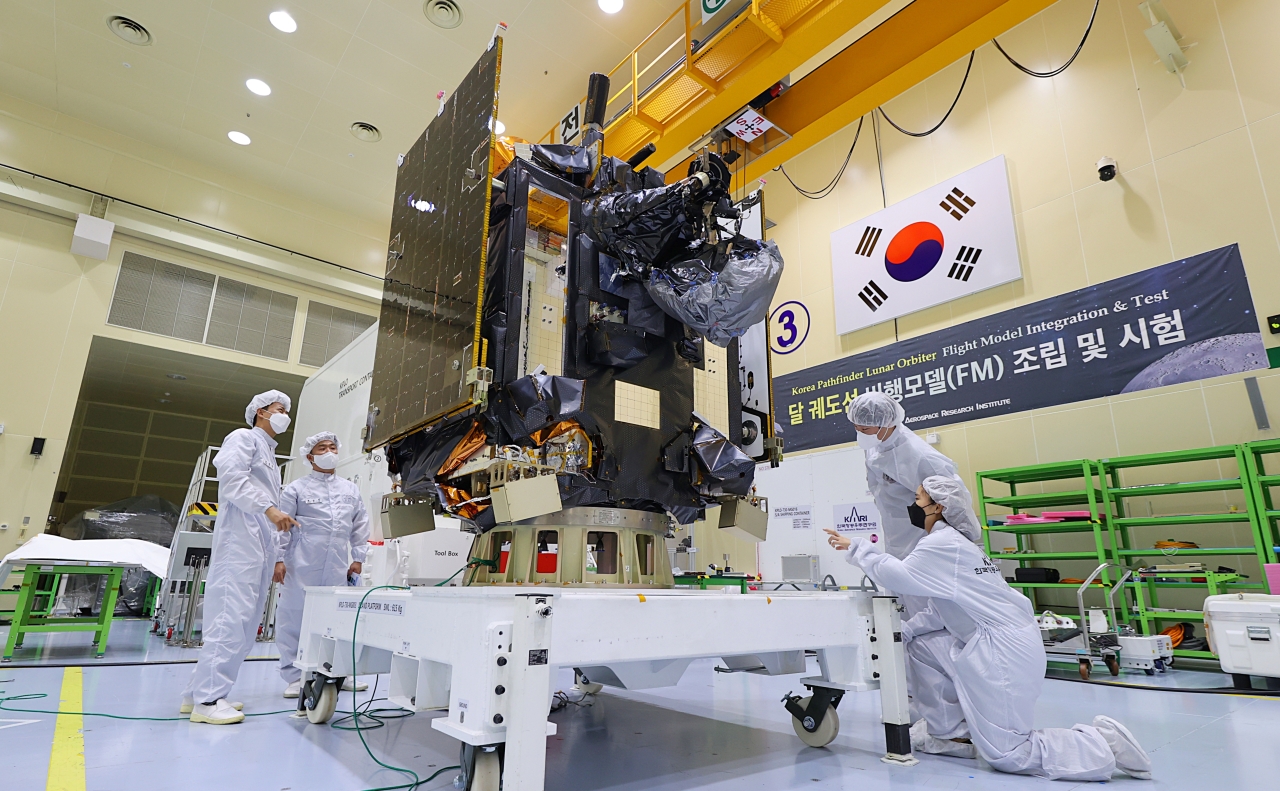 The country's first lunar mission, which has been named "Danuri" through a nationwide naming contest, has completed the final stages of space tests including durability checkups against extreme temperatures and electromagnetic waves at the Korea Aerospace Research Institute. It is waiting to be transported to its launch site in the US -- the Cape Canaveral Space Force Station in Florida -- in early July.

A combination of the two Korean words "dal" and "nuri," meaning "moon" and "enjoy," respectively, Danuri was unveiled to reporters on Friday at the KARI headquarters in Daejeon, six years after the development of the country's first lunar orbiter began in 2016.

"With over 60,000 people (participating in the naming contest), we have a meaningful name in Danuri. We have come this far 15 years after the first mention of a lunar probe," said Lee Sang-ryool, president of KARI.

"Danuri will be launched into space on a SpaceX Falcon rocket on Aug. 3, Korea time. It will enter the moon's orbit on Dec. 16 and begin to carry out various scientific missions and tests from 2023."

The Korea Pathfinder Lunar Orbiter's (KPLO) dry mass is 418 kilograms and about 2 meters in length, height and width when all parts are folded. The KARI said Danuri's light weight has a competitive edge over other countries' lunar orbiters, such as Japan's Selene weighing at 1,984 kg and US' Lunar Reconnaissance Orbiter at 1,018 kg. 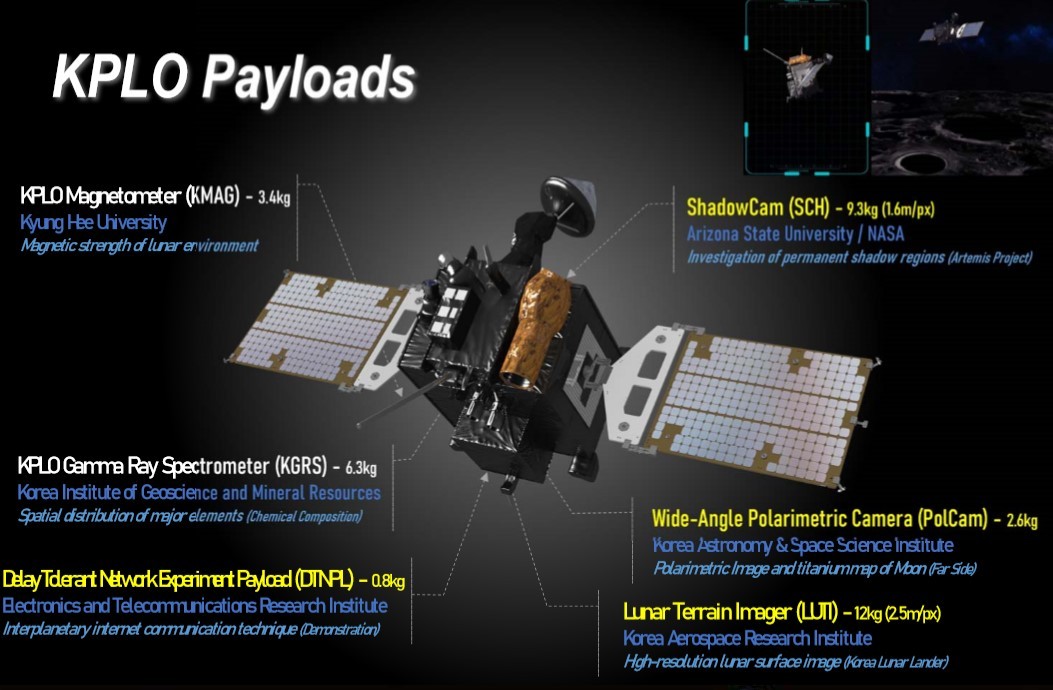 Korea Pathfinder Lunar Orbiter's payloads (Korea Aerospace Research Institute)
The objectives of Danuri include identifying potential landing sites for future lunar missions, testing interplanetary internet communication, conducting scientific investigations of the environment, topography and resources on the moon and probing the dark side of the moon.

In particular, Danuri will attempt to send the music video of K-pop megastar BTS' Billboard-topping hit, "Dynamite," to Earth to test the availability of internet connection in space. 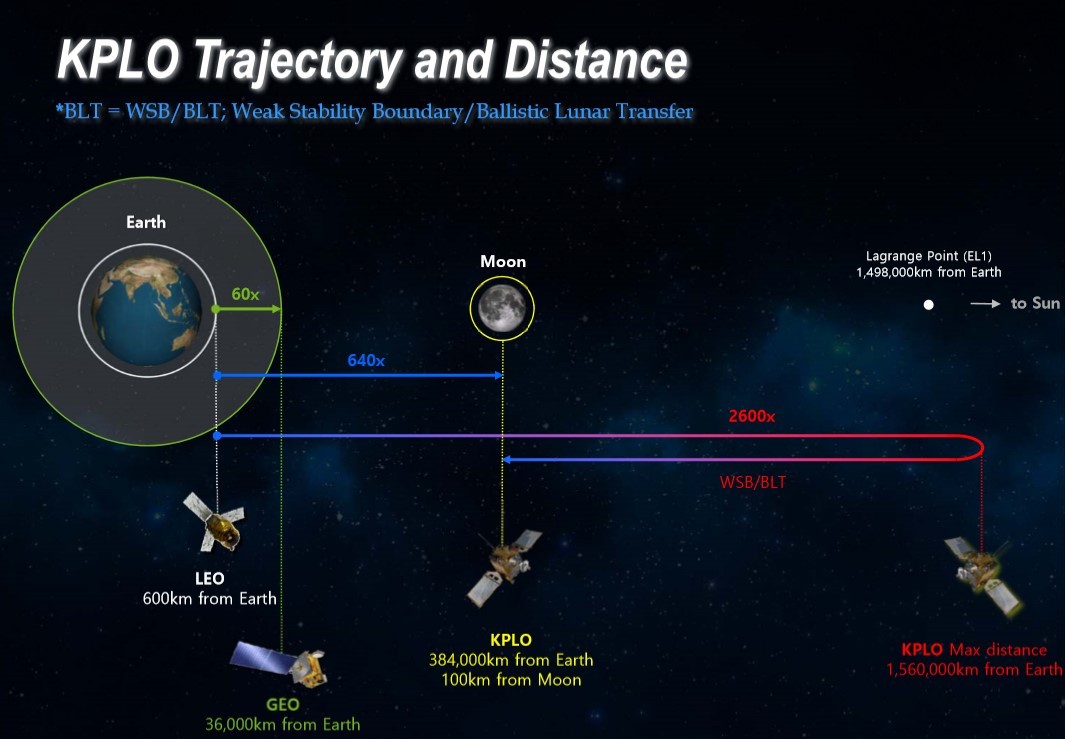 Korea Pathfinder Lunar Orbiter's trajectory (Korea Aerospace Researche Institute)
As the transfer approach minimizes the amount of energy required to change the orbiter's course, it requires the least amount of fuel. Therefore, the KPLO can have such a light mass, according to KARI.

About 60 space experts will be working around the clock at the mission control center from the moment of Danuri’s launch until it enters the moon's orbit in December.

In order to receive signals from Danuri once it is deep in space, KARI has built the country's first deep space antenna -- the Korea Deep Space Antenna -- in Yeoju, Gyeonggi Province. The KDSA's main reflector has a 35-meter diameter and a max height of 45-meter from the ground. 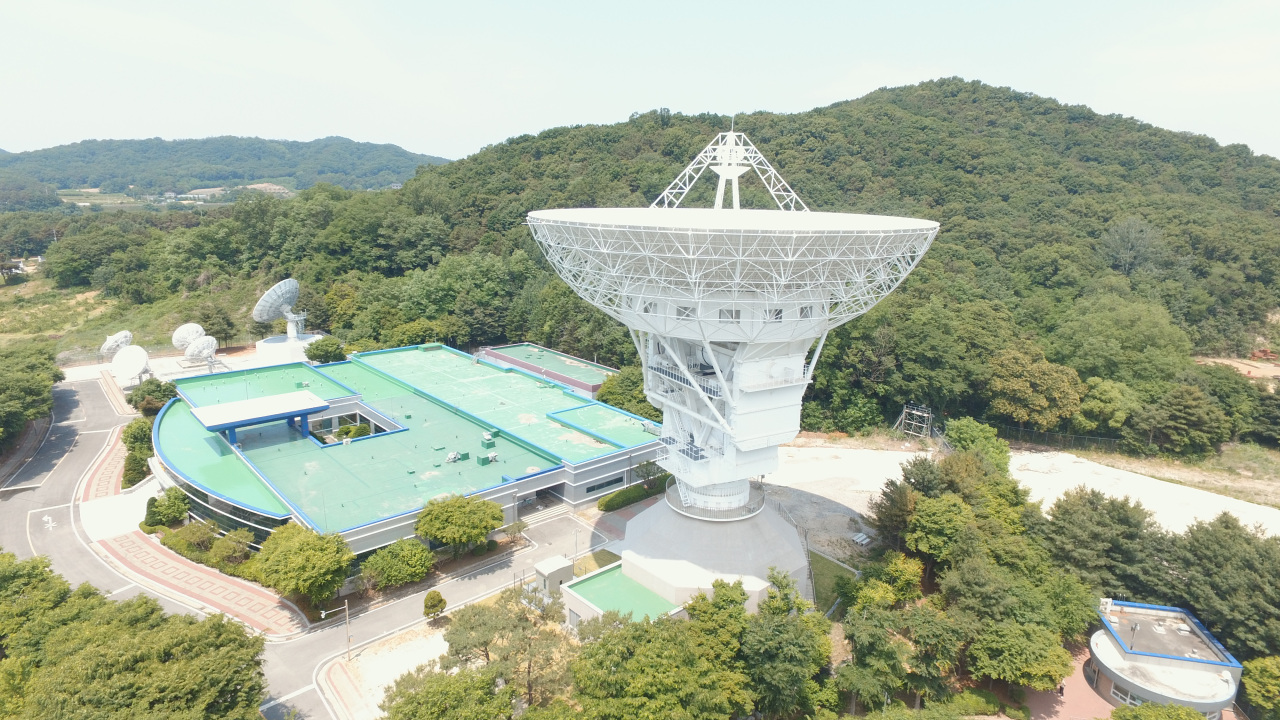 The Korea Deep Space Antenna in Yeoju, Gyeonggi Province (Korea Aerospace Research Institute)
The Korean antenna is connected to NASA’s Deep Space Network that shares information with three other deep space antennas in Australia, Spain and the US. These antennas spread across the globe will pick up the images and data that Danuri will send to Earth as it orbits the moon 12 times a day.

The KARI president pointed out that the lunar mission will mark the first time for a hardware cooperation between South Korea and NASA as Danuri will carry the shadow camera developed by Arizona State University. The shadow camera’s mission is to investigate permanently dark regions on the moon.

"If we gain trust from this (mission), I believe we can do bigger and more challenging tasks. Aside from the Artemis Accords, (the cooperation) shows what we have achieved in regard to the lunar orbiter. It could serve as a chance for us to step into the deep space," said Lee.

In May 2021, South Korea became the 10th country to sign the Artemis Accords, a set of principles guiding space cooperation among nations participating in NASA's lunar exploration plans. Seoul was also the first to sign the accords under the Biden administration.

Danuri's mission length is planned for a year until the end of 2023 with space authorities having prepared five or more scenarios once it enters the targeted orbit on the moon. The KPLO could enter an extended mission phase depending on how much fuel is left by the end of the scheduled duration, according to KARI. 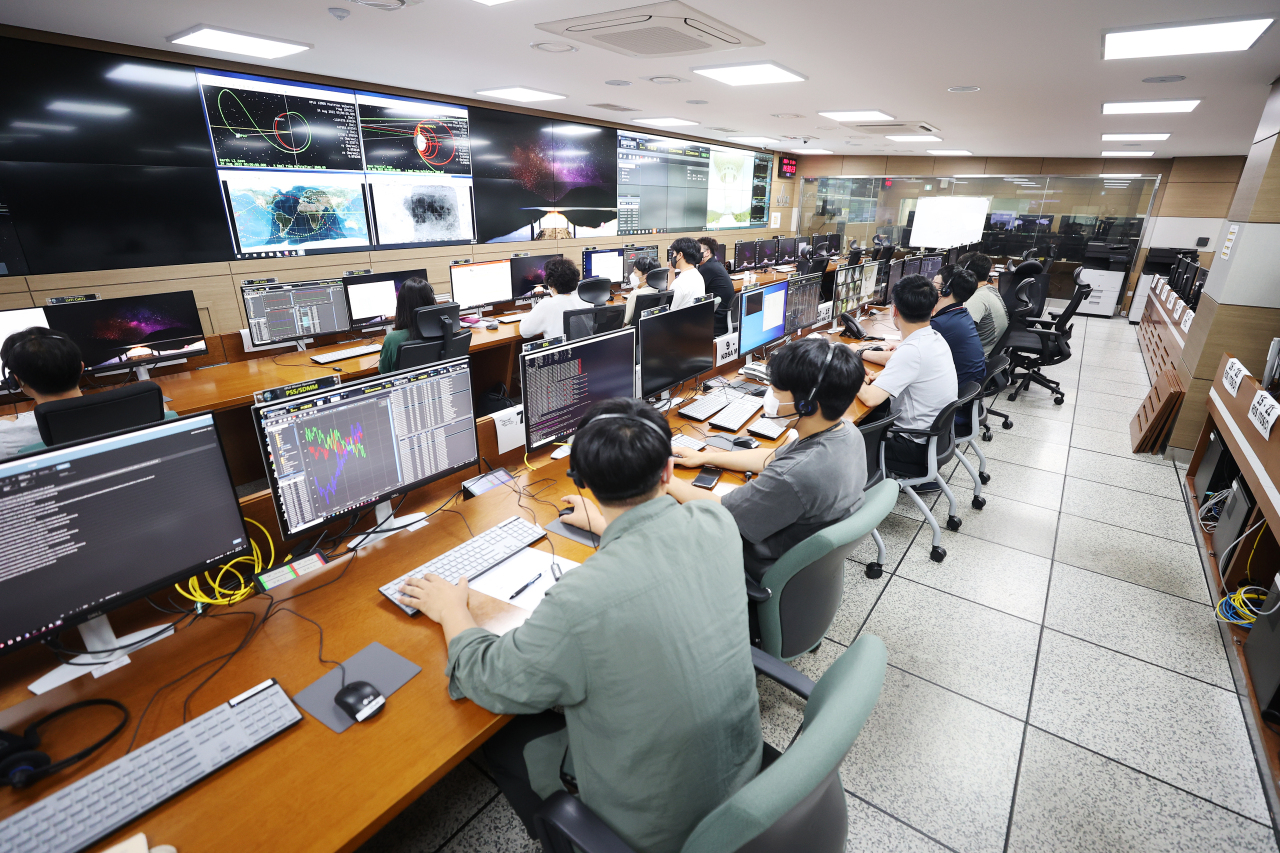