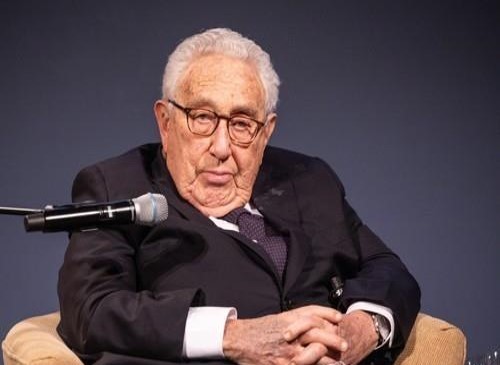 Henry Kissinger, a former US national security adviser, said South Korea and the US should work together to solve multiple challenges the world faces, in an international conference held in Seoul Friday.

The Asan Institute for Policy Studies held the Asan Symposium “Celebrating Korea-US Relations: 140 Years and Beyond” to commemorate the 140th anniversary of diplomatic relations between Korea and the US.

In the virtual congratulatory remarks, Kissinger said South Korea has built a strong military force through the Korea-US alliance while growing as a member of the G-20 from one of the world’s poorest countries. He evaluated that South Korea and the US have cooperated in various fields such as politics, economy and culture.

Kissinger said Korea and the US are facing common problems in various fields such as climate change, infectious disease pandemics, regional power struggles, advanced technology management and artificial intelligence, and that we must work together to solve them.

Chung Mong-joon, honorary chairman of the Asan Institute for Policy Studies, talked about the necessity of continuous development of the Korea-US alliance for the future, looking back on the history of friendship, trust and cooperation of the two countries.

In welcoming remarks, Chung said the US is a close friend who shares values such as freedom, democracy, and market economy with South Korea, adding it has always been with Korea in overcoming Japan’s forced aggression and the Korean War.

He pointed out that the recent situation on the Korean Peninsula is very similar to that of 140 years ago, saying movements in neighboring countries such as China and Russia have raised concerns.

“We need to seriously consider who our true ‘friends’ are,” Chung said.

Chung saw the need to make efforts to improve relations with China and Japan with the Korea-US “comprehensive strategic alliance” based on liberal democracy.