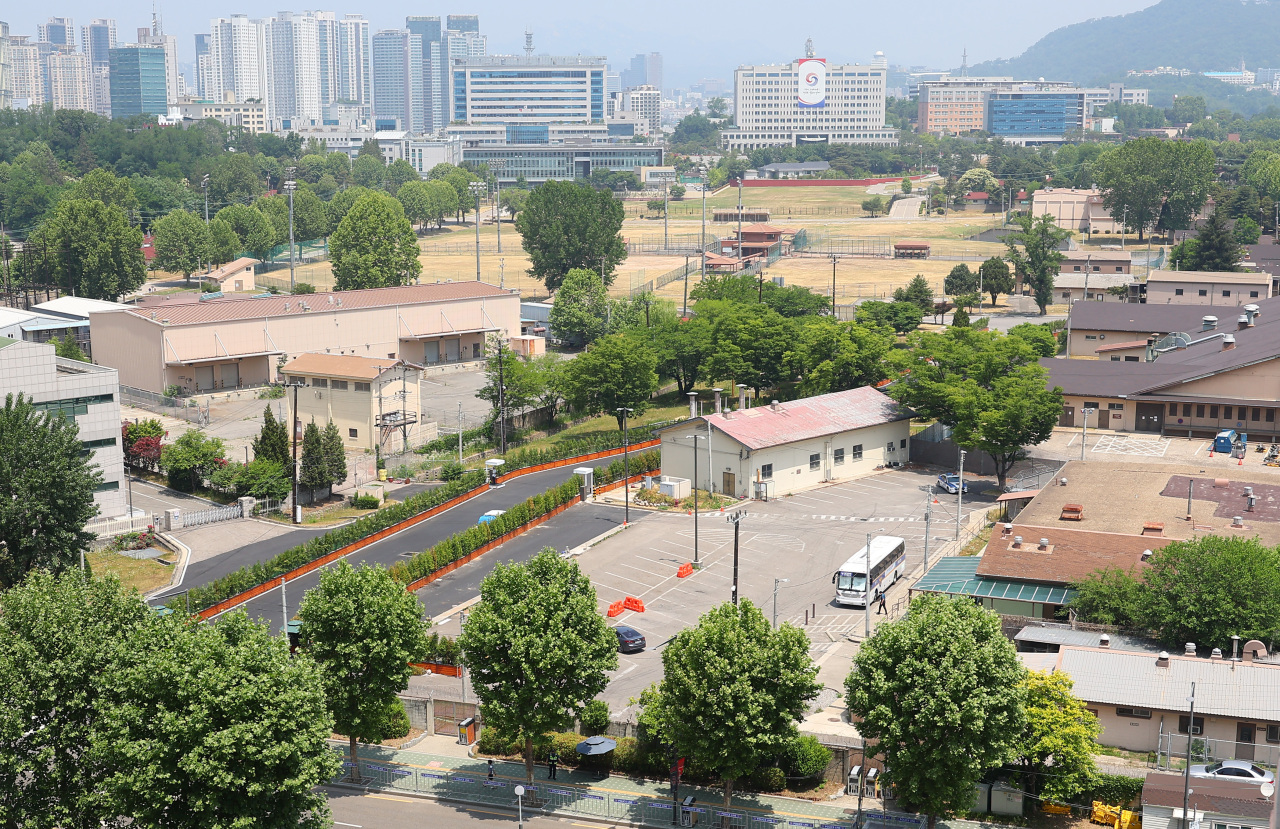 Gate 13 at the US Army Yongsan Garrison in Yongsan-gu, central Seoul on Friday.(Yonhap)
The United States Forces Korea on Friday returned the southwestern part of its Yongsan Garrison in the vicinity of the newly relocated presidential office to Seoul, paving the way for President Yoon Suk-yeol to transform the US military base into a large public park.

The United States Force Korea reverted the 51,000 square meters of land that covers roads within the military base and areas nearby Gates 13 and 14 in Yongsan-gu, central Seoul.

South Korea and the US have concurred on retroceding the large-scale US military base in central Seoul in stages in light of the different framework of relocating a wide range of military units and ancillary facilities to the Osan Air Base and Camp Humphreys in Pyeongtaek, Gyeonggi Province.

The Status of Forces Agreement joint committee has continued consultations on the plans to hand over the territories used for the US military installations.

“The government will continue pangovernment discussions and consultations with the US to make more progress in returning the remaining areas of the Yongsan Garrison and the unreturned military bases,” the

South Korean government said in a statement jointly issued by related government agencies including Defense Ministry and Foreign Ministry. “We will also expound on the outcomes to the public.”

A total of 69 military bases have been handed over to South Korea out of 80 that the US Forces Korea committed to returning in accordance with the 2002 Land Partnership Program and 2004 Yongsan Relocation Program, South Korea’s Defense Ministry confirmed Friday.

The additional return would provide an impetus to President Yoon’s emblematic pledge to turn the Yongsan military base area into the first national public park by the end of this year and open it to the public as a way of enhancing communication with the people.

The future Yongsan park is located next to the presidential office, which has previously been used by the Defense Ministry in Yongsan-gu, central Seoul.

South Korea’s Ministry of Land, Infrastructure and Transport on Thursday also announced that it will temporarily open that part of the site that was once used as the Yongsan Garrison and will be used for building the Yongsan park.

But the decision has drawn criticism as the land and groundwater at the military bases have been found to be contaminated with metal, oil and toxic chemicals.

South Korea and the US have diverged in the cost-sharing of decontamination procedures. South Korea’s stance is that they would pay the decontamination costs first to ensure public safety while continuing discussion with the US to seek solutions.

But the US should take responsibility for decontaminating environmental pollution in the military bases in accordance with the “Memorandum of Special Understandings on Environmental Protection” signed in January 2001, an official at the Defense Ministry, who wished to remain anonymous, said Friday.

The US would promptly take actions to remedy contamination caused by the USFK that poses “known, imminent and substantial endangerment to human health,” Washington said in the agreement.