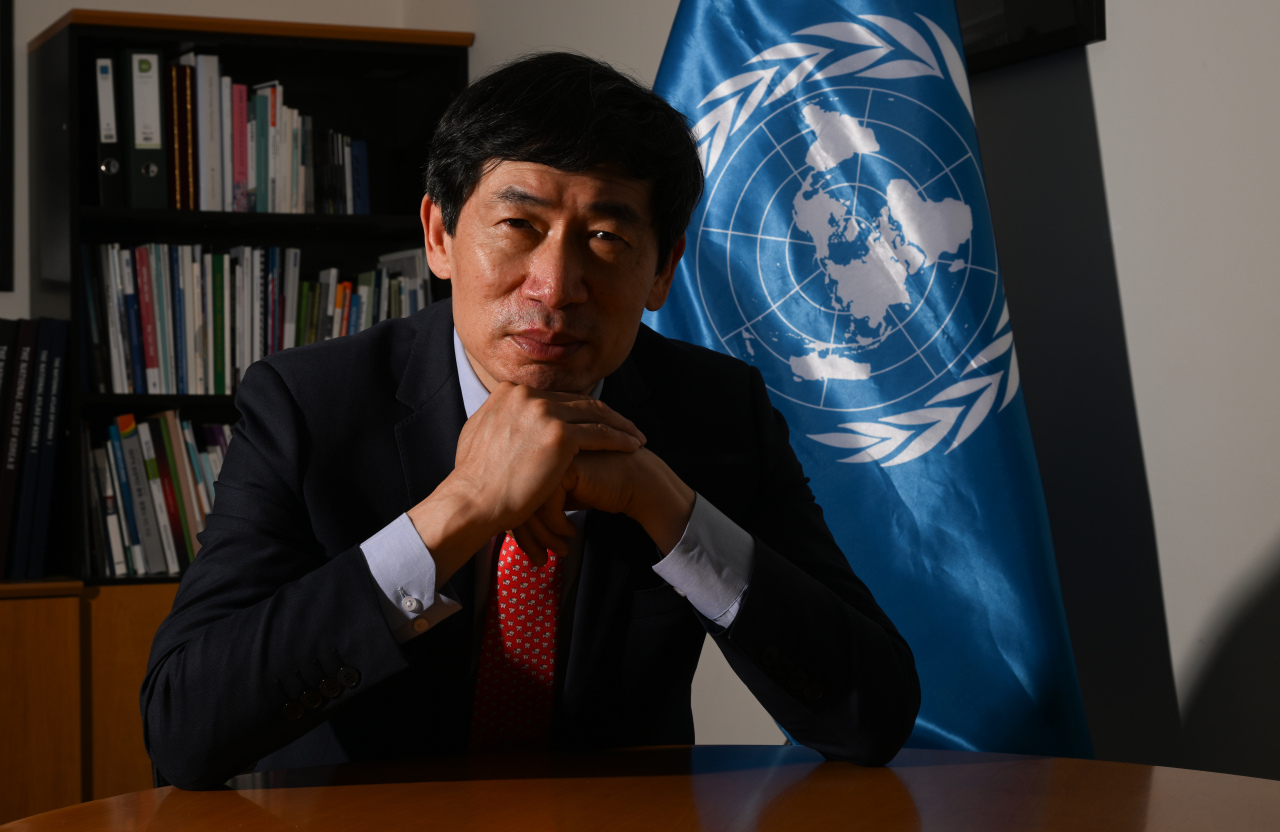 UN Assistant Secretary-General and Director of the UNDP Bureau for Policy and Programme Support Haoliang Xu poses during an interview with The Korea Herald in Seoul on May 24. (Im Se-jun/The Korea Herald)
Some countries’ economies are recovering back to pre-pandemic levels, but COVID-19 continues to wreak havoc on developing countries.

As the rate of vaccination is the key indicator on a country’s socioeconomic recovery and future growth, global efforts are needed to support the developing countries to vaccinate their populations, Haoliang Xu, a director at the United Nations Development Program, said in an interview with The Korea Herald.

Assessing the impacts of the pandemic, the UNDP director explained how it has further widened the gap between developed and developing countries. This would ultimately weaken global efforts for common sustainability goals, he said.

The COVID-19 pandemic led to an overall decline in the UNDP’s human development index in 2020 for the first time in 30 years since the concept was introduced in 1990. The UNDP’s HDI assesses the development of countries by looking at three key factors: health, education and income.

“With COVID-19 pushing more people into poverty, severe long-term effects of the COVID-19 pandemic could push an additional 207 million people into extreme poverty on top of the current pandemic trajectory, bringing the total to over 1 billion by 2030,” Xu said, citing a UNDP study.

“Governments are affected because they cannot collect taxes due to decreased economic activities, and their loss of revenue means they have no fiscal space to invest and implement policy measures to support their people,” Xu added.

According to the UNDP, 56 percent of developing economies are at risk of debt distress on public and publicly guaranteed debt in 2022. In the year before, global debt reached a record $303 trillion, a significant increase from $226 trillion in 2020.

Governments of developed economies are seen to have an average of 20 to 25 policy response measures to support their people financially. But for developing countries, the average number of social response measure is only three. 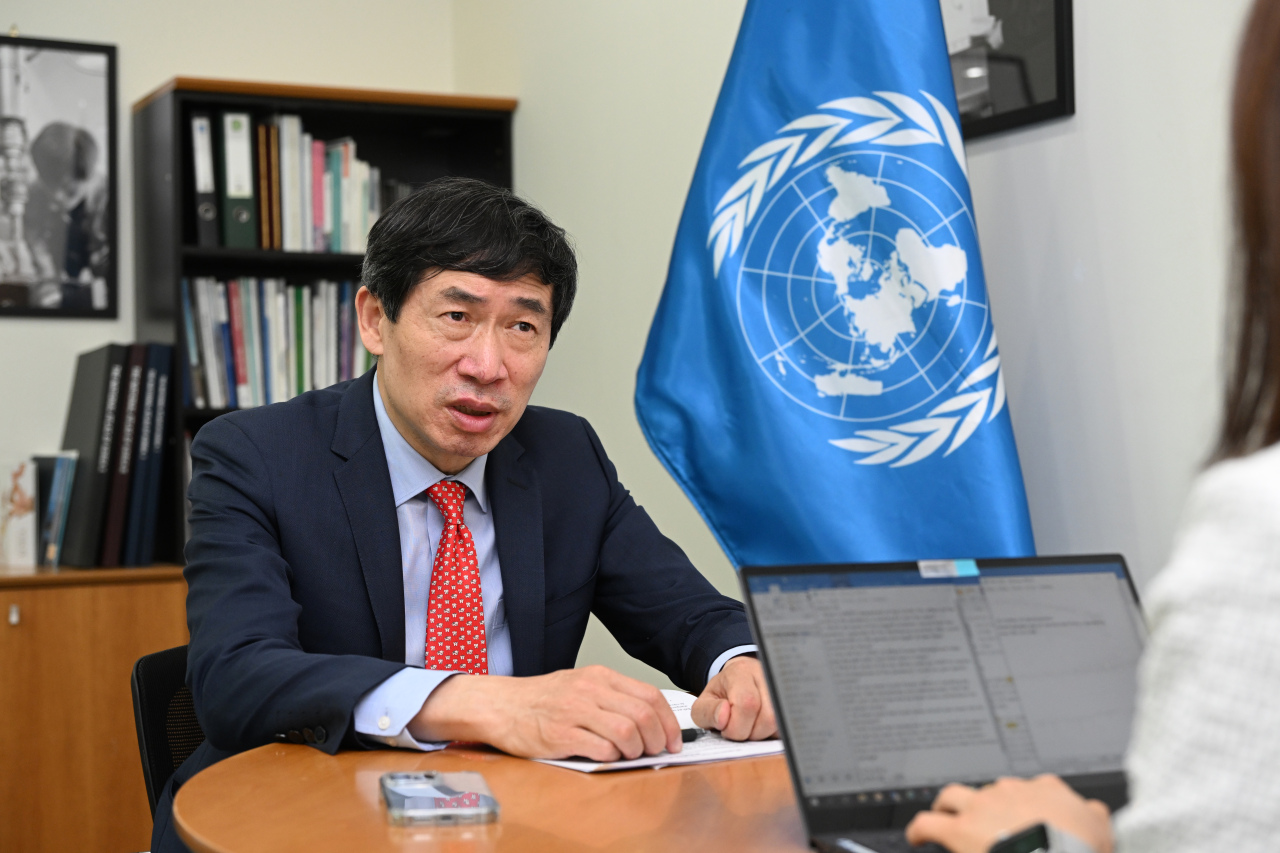 UN Assistant Secretary-General and Director of the UNDP Bureau for Policy and Programme Support Haoliang Xu poses during an interview with The Korea Herald in Seoul on May 24. (Im Se-jun/The Korea Herald)
Vaccine equity

What is concerning is the sluggish speed at which vaccines are being distributed in developing countries, Xu said. This means slower recovery, further widening the gap between developing and developed countries.

“The rate of vaccination is the best predictor of socioeconomic recovery and future growth (of a country). There’s a serious inequity between developed and developing countries when it comes to vaccination,” Xu said.

According to the World Health Organization, 3 in 4 people in high income countries have been vaccinated with at least one vaccine dose as of May 25. In low-income countries, the figure drops to 1 in 6 people.

Most developing countries do not have the ability to produce vaccines, nor the fiscal space to purchase a large amount of vaccines for their populations.

In the latest Group of 20 summit held in October 2021, the G-20 countries failed to draw up an agreement on temporarily suspending intellectual property rules on COVID-19 vaccines, which would allow all manufacturers approved by the WHO to produce them. Germany and Britain were among the countries that vetoed the proposal, which was led by South Africa and India.

The UNDP bureau chief said that while there is COVAX -- an international scheme for vaccine distribution -- the speed at which vaccines are being delivered to developing countries are not sufficient.

“Vaccine inequity will have a lasting and profound impact on the socioeconomic recovery of low-income countries,” Xu added.

In order to support struggling countries, the UNDP has introduced a digitalized vaccine management system which would help them properly manage, store and administer the vaccines -- a complex commodity to handle.

The UNDP has also provided countries with analyses and forecasts, such as how growth reduction impacts the poor, so that countries can come up with policy measures to prevent the population from being affected too severely.

As the world struggles to overcome challenges that continue to widen the gap between developed and developing countries, Xu also pointed out that the world should reconsider how it defines development, putting planetary boundaries in context.

“All these kind of crises are raising the question of how we measure success for development. Until now, the paradigm of development has been that we pursue a convergence of level of development through economic growth, the gross domestic product and the standard of living,” Xu said.

“We know the challenges of this. We have a planetary crisis of climate change and biodiversity loss. If we continue the current paradigm of development, our future generations will not be able to enjoy the results of development, as the climate gets worse for them.”

The UNDP’s Human Development Index report for 2020 assessed countries by its original criteria of health, education and income levels for their HDI rank, as well as by a new criteria based on how much pressure the country puts on the planet called the Planetary pressures-adjusted HDI rank.

South Korea ranked No. 23 in the HDI together with Luxembourg, but fell to No. 42 in the PHDI ranking. Luxembourg’s rank also dropped to No. 154 when planetary pressure was considered as an evaluation factor.

Costa Rica landed at No. 62 in the HDI ranking, but ranked No. 25 in the PHDI since it gets all of its energy from renewable sources.

“Every country has homework to do,” Xu said, adding that countries should focus on how to decarbonize their economies to tackle the common challenges facing humanity.