[ The Korea Herald – Send E-mail ]
Disconnected from mainland, Jeju delivers DP one of its few wins
By Yoon Min-sik
Published : Jun 2, 2022 - 14:50
Updated : Jun 2, 2022 - 14:50
Among the few consolation prizes for Democratic Party of Korea’s bitter loss in Wednesday’s local elections was the resounding victory won by its candidate Oh Young-hun in the race for the Jeju governor’s office.

Born and raised in the southern resort island, the 53-year-old politician was the first Democratic Party candidate to be elected Jeju governor in 20 years. Woo Keun-min in 2002 was elected on the ticket of the Democratic Party’s forerunner, the Millennium Democratic Party. 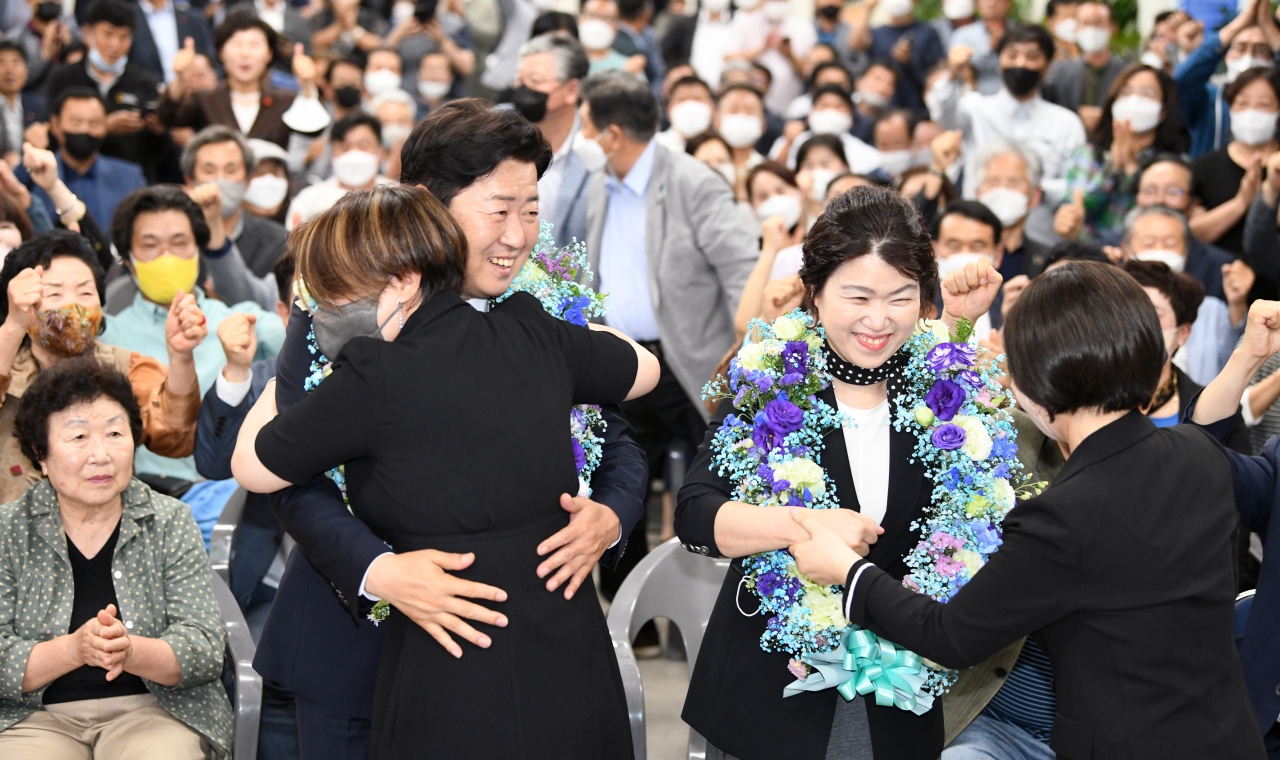 Jeju Governor-elect Oh Young-hun (left) and his wife Park Sun-hee are congratulated by his supporters at his campaign office in Jeju City, Jeju Island, after exit polls project him to be the winner the election on Wednesday. (Yonhap)

Jeju has never shown any allegiance to either faction in domestic politics’ time-old regional rivalry between the liberal southwest and the conservative southeast. Half of the 10 governmental elections in the island’s history were won by independent candidates, and the island in 2018 chose an independent but conservative-leaning candidate Won Hee-ryong in elections otherwise dominated by liberals. That year, the Democratic Party won 14 of 17 leadership positions at the metropolitan and provincial levels.

What Jeju voters care most about seems to be the candidate’s allegiance to the island. To date, not one person born outside of Jeju was ever elected the governor.

Governor-elect Oh is one whose entire political career has been strongly linked to Jeju. He is a graduate of Jeju University and a former aide to another Jeju-based politician Kang Chang-il. Oh has also been a member of Jeju’s provincial council and a lawmaker representing the island in the National Assembly.

But outside of the governor election, Jeju has been somewhat favorable toward liberals, at least in the past two decades. Everyone that has won a parliamentary seat for Jeju since 2004 belonged to the liberal faction. The March presidential election saw Democratic Party candidate Lee Jae-myung garner more votes in Jeju than the eventual winner Yoon Suk-yeol, at 52.6 percent versus 42.7 percent.

Kim Han-kyu of the Democratic Party continued this trend by winning the by-election for the parliamentary seat representing Jeju City, which also took place Wednesday.