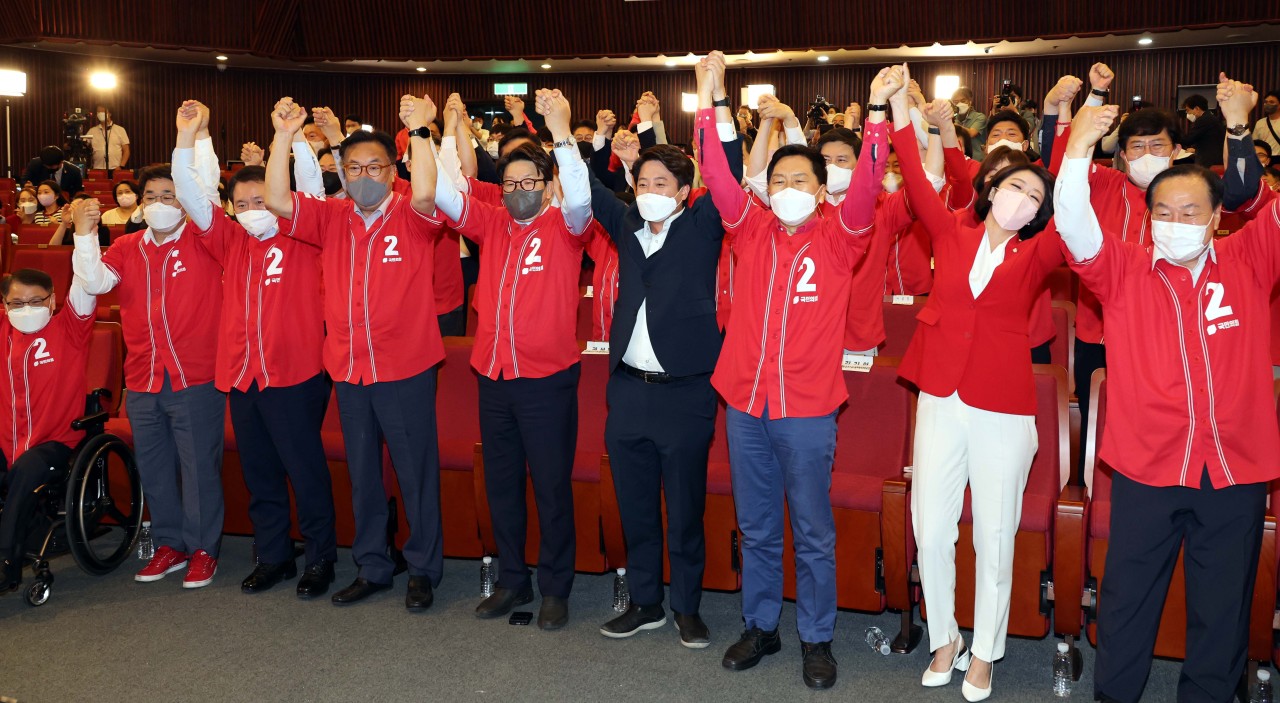 The main opposition Democratic Party of Korea was seen to be leading its traditional strongholds of North Jeolla and South Jeolla provinces, Jeju Island and Gwangju. The outcome still remained uncertain for the Gyeonggi Province gubernatorial election and mayoral races for Daejeon and Sejong.

Ballots were still being counted, which the National Election Commission expected to finish early Thursday morning. Final results of the local elections were not available as of press time.

The ruling party was already favored to prevail in the local elections from early on, with opinion surveys and exit poll results putting its candidates in the lead in traditional strongholds and many potential swing regions.

Exit poll results from terrestrial broadcasters KBS, MBC and SBS released at 7:30 p.m. favored the conservative party to win 10 out of 17 metropolitan mayoral and provincial gubernatorial elections, as opposed to four for its rival liberal party.

In the Gyeonggi Province gubernatorial election, exit poll results gave a slim lead for Kim Eun-hye of the People Power Party at just 0.6 percentage points ahead of Kim Dong-yeon of the Democratic Party.

Wednesday’s local elections were also to elect new heads of 226 lower-level administrative units, as well as 872 seats in provincial and metropolitan councils and 2,988 in lower-level local councils.

A total of 7,616 candidates registered as candidates for the local elections, recording the lowest-ever overall competition rate of 1.8 candidates per open seat, dipping below the previous record of 2.3 per open seat in 2014.

Exit poll results did not indicate full forecasts on which party would clinch how many of the public official posts up for grabs, but it was expected the People Power Party would claim the majority, as it was seen to be leading overall across the 17 metropolitan mayoral and gubernatorial elections.

The People Power Party was widely predicted to bolster its power in the local elections from early on. After the party won the presidential election in March, it was expected to continue the vibe of victory onto the June 1 elections, less than a month since President Yoon Suk-yeol took office on May 10.

“We expected us to win the elections, but this is beyond our expectations,” Rep. Kweon Seong-dong, floor leader of the People Power Party, told reporters after exit poll results were announced.

“Only 20 days have passed since the Yoon Suk-yeol government kicked off, and we believe these results reflect voters’ belief that they should show support for the People Power Party in the local elections for the new government to successfully carry out its agenda over the next five years.”

The Democratic Party’s situation room turned ice cold upon release of the exit polls, as they were way off the party’s expectations announced earlier. Key officials with the party said the results indicate how disappointed voters are with the liberal faction following a series of sexual misconduct scandals and a continued internal power struggle.

The public sentiment on the disappointing outcome of the five-year term of the Moon Jae-in administration was also reflected in the results, they added.

“I thank the people who cast their ballots for the local elections, and we will continue to monitor how they will turn out,” Rep. Yun Ho-jung, head of the emergency steering committee for the Democratic Party, told reporters after a question regarding whether the exit poll results met his expectations.

Lee Jae-myung, chief of the Democratic Party’s election campaign committee, did not answer questions from reporters, leaving the situation early at 7:40 p.m.

Both major political parties encouraged voters to cast their ballots in the local elections, as they saw a tight race continuing in many key regions. Local elections usually see much lower voter turnout than other elections, indicating that both parties could be losing votes.

Even though the local elections saw a promising early voting turnout over the weekend, the aggregate turnout fell much lower than expected and marked one of the lowest rates seen for any local elections.

Two-day early voting for the local elections that ran until Saturday ended with a turnout of 20.62 percent, as more than 9.13 million voters cast their ballots. It was the highest early turnout reached in local elections and fourth highest for any nationwide election in South Korea.

But the National Election Commission announced the tentative voter turnout for the Wednesday elections at 50.9 percent, 9.3 percentage points lower than 60.2 percent turnout reached in the previous 2018 local elections.

South Jeolla Province recorded the highest turnout of 58.5 percent among 17 metropolitan cities and provinces, while its neighboring city Gwangju recorded the lowest figure at 37.7 percent.