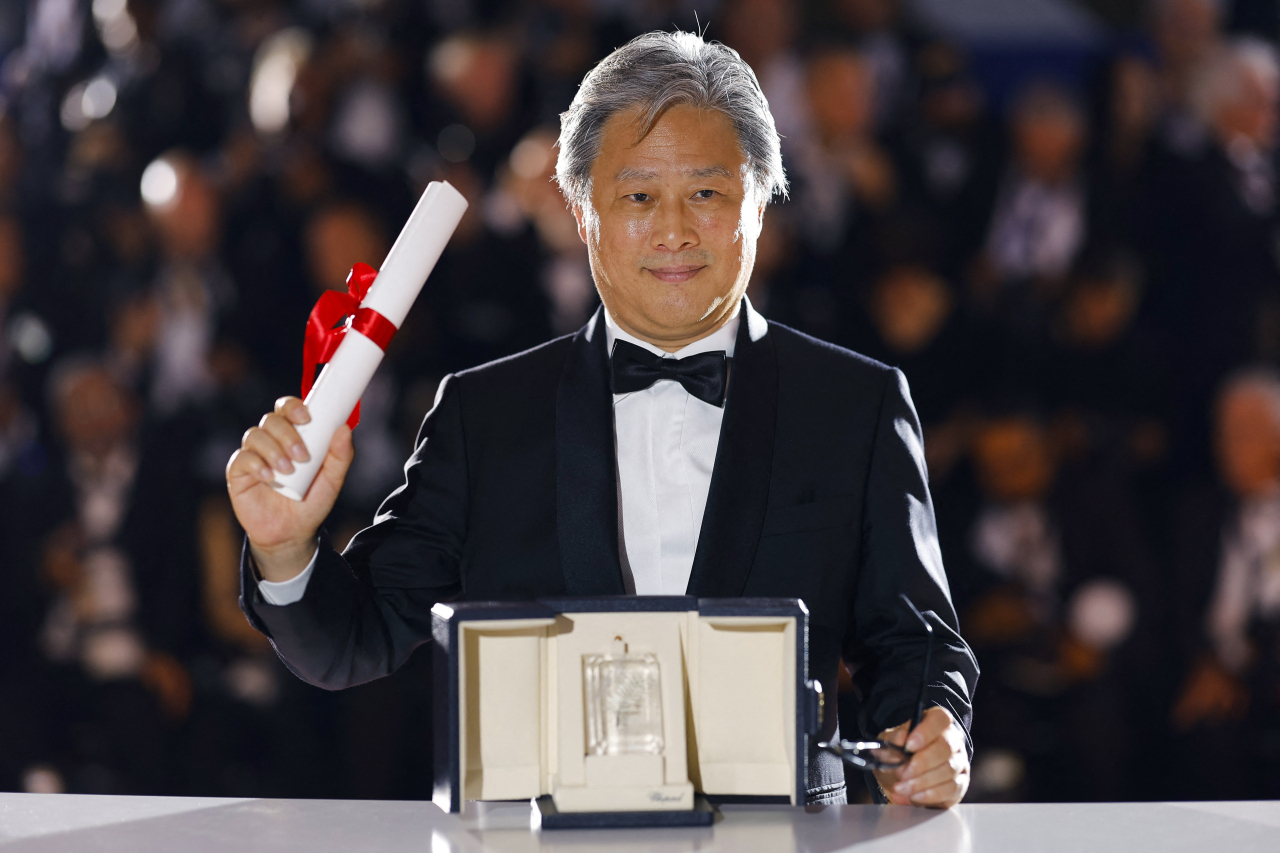 South Korean director Park Chan-wook of “Decision to Leave” poses for photos after winning the best director award at the 75th Cannes Film Festival in Cannes, France, on Saturday. (Reuters-Yonhap)

1) One of the world’s most prestigious film festivals has once again acknowledged the power of South Korean cinema.
*prestigious: 명망있는, 일류의
*acknowledged: 인정된, 정평 있는

3) Park’s thriller-romance film, “Decision to Leave,” about a detective who comes across a widow who is a prime suspect in his murder investigation, stars Korean actor Park Hae-il and Chinese actor Tang Wei.
*prime suspect: 주요 용의자
*investigation: 수사, 조사

4) In accepting his award, Park expressed gratitude to fans for going to theaters and looked forward to a bright future for cinema.
*gratitude: 고마움, 감사
*look forward to: ~를 기대하다

5) “With the dreadful pandemic, there were times when we struggled due to the theaters closing down, but at the same time, we all realized how precious the existence of theaters had been to us. I am confident that we will keep safeguarding the cinemas in difficult times, like we have been through the pandemic,” Park said in Korean.
*dreadful: 끔직한, 무시무시한
*existence: 존재, 생활

1) Seoul Jazz Festival, which ran from Friday to Sunday at the Olympic Park’s 88 Jandi Madang, in southeastern Seoul, was filled with the audience’s joy, love, freedom, happiness and laughter.
*run from … to …: (날짜)부터 (날짜)까지 진행된다

2) With the return of the landmark annual outdoor jazz fest after a two-year break as South Korea scrapped most of its COVID-19 social distancing restrictions, the first day of the fest kicked off under a scorching sun.
*scrap: 폐기하다, 버리다
*scorching: 모든 걸 태워 버릴 듯이 더운

3) About 10,000 festivalgoers flocked to the venue, hanging out on picnic mats and chairs on the grass while live music filled the air. While some were seen wearing shorts and tank tops, many were equipped with sunglasses, caps and umbrellas to avoid the glaring sunlight.
*flock: 모이다, 떼 지어 가다
*glaring: 너무 밝은, 눈부신