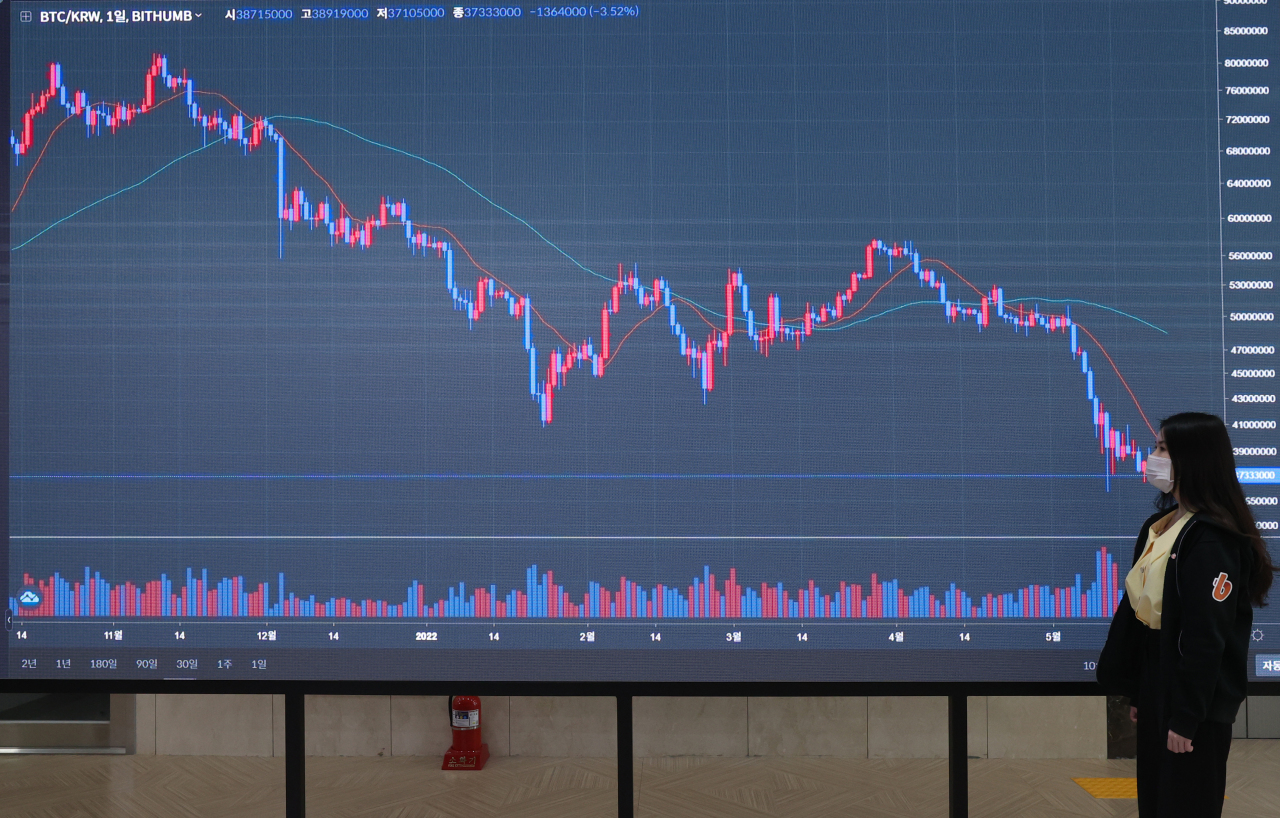 Changes in Bitcoin price are shown on an electronic board at Bithumb`s customer service center in Seoul on May 24.(Yonhap)
South Korean authorities and major cryptocurrency exchanges are cranking up the heat on controversial “stablecoin” terraUSD and its sister luna over its price fall fiasco, with the prosecution launching a crackdown on the case, reports said Sunday.

Major crypto exchanges here are planning to form a joint body that would help them counter crises like the collapse of the terraUSD and luna, which caused some 280,000 Korean investors to see almost $38 billion wiped out from their balance sheets in the first week of the price fall, according to reports.

The value of terraUSD and luna coins lost 99 percent of their value in just 48 hours from May 9, compared with a high of $116 per coin in December last year. The coins are now each worth less than two-hundredths of a cent, with the total damage here yet unknown.

The top five exchanges here -- Bithumb, Upbit, Korbit, Gopax and Coinone -- have delisted the troubled coins as of Sunday, after receiving flak from the public and lawmakers for their “uncoordinated” response toward the crisis. Bithumb and Gopax halted trading of the coins on May 10, but others delisted the tokens days or weeks later, prompting confusion among investors.

But the exchanges gave a coordinated response in refusing to list terra 2.0 and luna2, the revamped version of the troubled coins created by Terraform Labs CEO Do Kwon, launched Saturday.

Meanwhile, prosecutors officially launched an investigation into the crypto crash and whether fraud and Ponzi scheme charges could be brought against Kwon, a JTBC report said Saturday. The recently revived special financial and securities crime investigation team under the Seoul Southern District Prosecutors Office called in a former employee of Terraform Labs, one of the developers of the original terraUSD and luna in 2019, who admitted there were voices within the firm calling to scrap the debut of the coins, the report added.

The coins were launched despite criticisms within the firm that providing investors with a high interest rate, but without a sustainable collateral or profit model, the blockchain would eventually collapse, the unnamed employee reportedly told prosecutors.

Prosecutors are reportedly focusing on whether Kwon and other top officials at the firm were aware of the defects in the coins’ algorithm before its launch.

Stablecoins are designed to derive their value from being fully backed by reserves, but terraUSD is not backed by cash or other kinds of traditional assets, such as treasuries. It was meant to maintain a $1 peg through financial engineering as a so-called algorithmic stablecoin.

So far, 81 South Korean investors who invested in the two troubled tokens of Terraform Labs have sued Kwon and the firm’s co-founder Daniel Shin, with damages amounting to a combined 8.1 billion won ($6.4 million), official documents show. The complaints have been filed with the Seoul Southern District Prosecutors Office for alleged fraud.