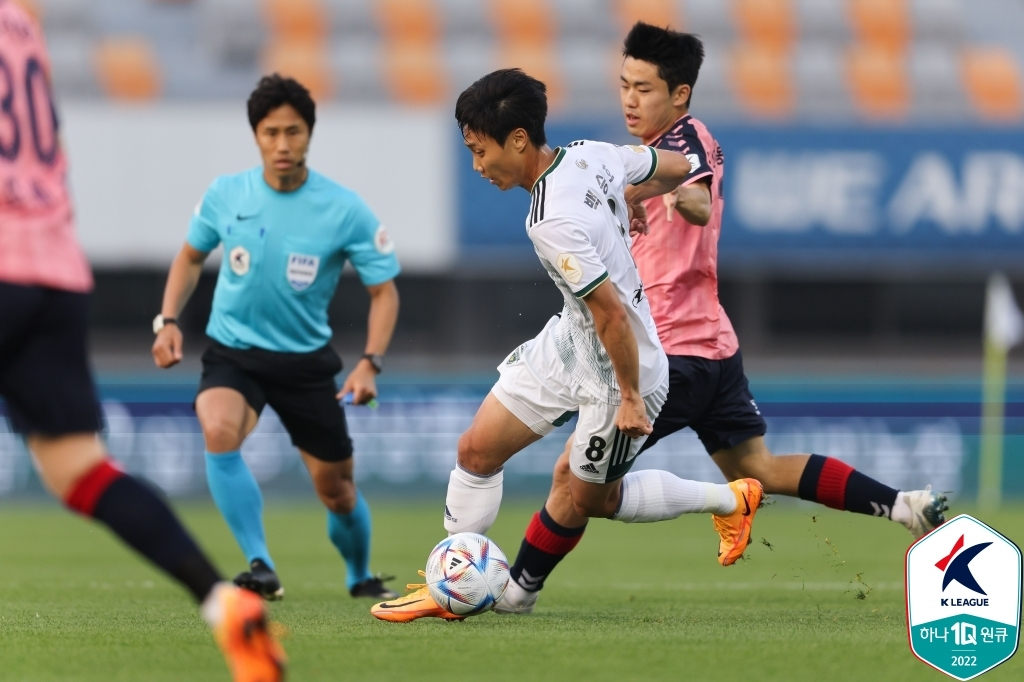 Paik Seung-ho of Jeonbuk Hyundai Motors (C) is in action against Suwon FC during the clubs' K League 1 match at Suwon Stadium in Suwon, 45 kilometers south of Seoul, on Sunday, in this photo provided by the Korea Professional Football League. (KPFL)

Clubs jostling for second place in the top South Korean football league will meet for the second time on the weekend.

Through 14 matches, Jeonbuk are eight points behind the leaders, Ulsan Hyundai FC, at 25 points. Jeju United are right on Jeonbuk's heels at 23 points.

Jeju won their first meeting of the season against Jeonbuk by 2-0 on March 12. Jeju also played Jeonbuk tough in 2021, holding them to three consecutive draws before losing 2-0 in December.

Jeonbuk will likely have to beat Jeju to stay within a single-digit point of Ulsan, which will have a fairly easy matchup Saturday.

Ulsan will be at Suwon FC, also a 7 p.m. kickoff. Suwon FC are stuck in 11th place among 12 teams with 12 points, and they have allowed 26 goals, tied for the most in the league with Seongnam FC. Ulsan lead everyone with 23 goals scored, and they are the only team with three players ranked inside the top 10 in scoring this season: Leonardo (third) with seven goals, Um Won-sang (fifth) with six and Jun Amano (ninth) with five.

Also on Saturday, FC Seoul will host Gimcheon Sangmu FC, a matchup between teams separated by just one point in the tables. FC Seoul are one of three teams with 17 points, and they are in seventh place, while Gimcheon sit in ninth with 16 points.

On Sunday, last-place Seongnam FC will visit Incheon United in pursuit of their first winning streak of the year. Seongnam picked up just their second win of the season last Saturday. They hadn't won since April 3.

Incheon have fallen from second place to fifth in the midst of a six-match winless skid.

Daegu FC will host Pohang Steelers on Sunday, hoping to extend their undefeated streak against Pohang to six.

Gangwon FC will bring home Suwon Samsung Bluewings. Gangwon have fallen to 10th place while collecting just one victory in their past 10 games. Suwon have won three of the five matches this month since hiring new head coach Lee Byung-geun, though all three wins have come at home.

The K League 1 will go on an international break after this matchweek and will resume on June 17. South Korea will play four friendly matches between June 2 and 14, as part of their preparation for this year's FIFA World Cup. (Yonhap)